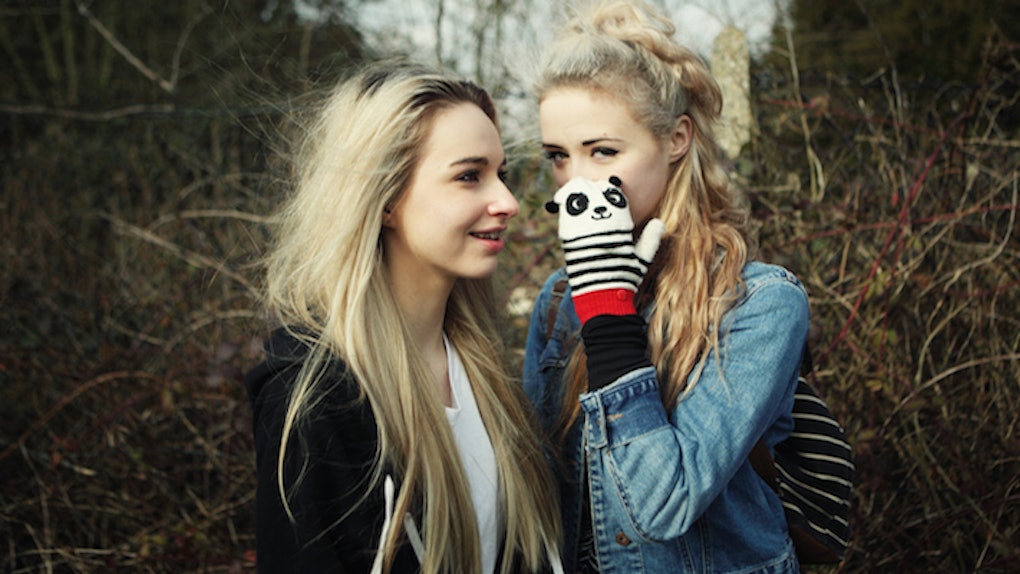 If Your Partner Hates Their Family, They Will Probably Hate You Too

"Never date anyone who talks shit about their family," a cool girl, whom I had a wild crush on, once told me over dinner at a static restaurant in the West Village.

"Why?" I asked, my hazel eyes meeting her seafoam ones. Talking to this girl was like swimming in an endless sea of wisdom, and I just wanted her to continue to throw philosophical gems about life and love at me.

"Because if she talks shit about her own flesh and blood, no one is safe, Zara," she said.

I noticed her glass of wine was pretty much full, while mine was pretty much empty — the perfect metaphor for our dynamic. She sipped her wine slowly, and I nervously guzzled mine back, as if the answer to all of life's problems was at the bottom of the fucking glass.

"But what if they have really unfortunate families?" I pressed.

"It doesn't matter. It's very telling HOW exactly someone talks about their family."

I went back to my steak and stopped challenging her. I was in this new phase of letting new ideas settle in for a minute before staunchly refuting them.

Later that night, as I was lying awake in bed listening to a useless sleep meditation, thinking about what my girl crush had warned me against, it suddenly struck me: I had been down that road before, kittens.

I had teetered in four-inch heels down the cobblestone streets of a family shit-talker, and it was a disaster.

Several years ago, I briefly dated a woman who had nothing nice to say about anyone, especially her family. She didn't come from an abusive family, but she claimed she came from a "neurotic" family.

It's important to note that she saw a Republican lesbian therapist, too, who really wound her up about her family. (That's another reason I have a distaste toward Republicans, especially lesbian Republicans.)

"My mother always PUSHED me to do things I didn't want to do. I resent her, Zara. In fact, my mother is a huge bitch," she told me on the three-and-a-half-hour drive to Orange County to meet her parents.

"My brother, he's a real dick. My therapist thinks he's a narcissist," she went on to say, making an unnecessarily aggressive left turn at a yellow light. I held my breath and clutched my nonexistent pearls in fear.

I didn't think much of what shit-talking about her family actually said about her because I was totally used to it. In the two months we had been dating, she said the most vile things about everyone in her family, including the cat. She claimed the cat was a racist and probably a homophobe, too, since he scratched her every single time she picked him up. (Maybe the cat just didn't like to be picked up without warning? I mean, I get it.)

I was nervous to meet this (apparently) wicked, mean, selfish family of hers.

Her mother answered the door and gave me a huge hug. She had a southern accent and warm-as-honey eyes.

"Oh, sweetie, it's so lovely to meet you! Aren't you so, so pretty? Can I feed you? You look thin. Oh, but all you city girls are thin, huh?" she said, with an authentically-sweet smile plastered across her kind-looking, round face.

"See, there she is body-shaming you!" my then-girlfriend whispered into my ear as her lovely mother ushered us into their cinnamon-smelling house.

"Oh, Zara! I saw your pictures on Instagram, and I think we should be best friends!" her sister yelled, pounding down their spiral staircase. "My sister is so happy with you, too! YAY!" She embraced me like we were long-lost sisters finally reunited.

I have excellent bitch radar, and trust me, this girl didn't have a bitchy bone in her 100-pound body.

The rest of the day was amazing. I devoured cookies with her mother, I was proudly showed a slew of childhood pictures of my then-girlfriend by her sister and I never wanted to leave.

On the car ride home, however, former-girlfriend creature spat out more nasty trivia about her family. She kept going on about resentment, not being validated as a child, her mother's problem with being overweight, her sister's alleged anorexia that she cultivated for "attention" (a vile, vile accusation) and the way they both thought they were better than everyone else.

I felt myself become super uncomfortable — claustrophobic, even. I suddenly knew there was something totally off about this woman I was dating.

I mean, no family is totally perfect, but I had never heard anyone say such horrible things about the people who raised them.

My friends and I all hail from non-traditional families, and while we occasionally complain about them, we're proud of them. We always throw in an "I love my sister" before the "but she's acting like a royal bitch." My girlfriend was shit-talking to a whole other level.

And when me and the family shit-talker broke up, I found out this girl shit-talked me, too, to a level of shit-talking I had never experienced.

I'm a gay woman who writes on the internet. I've heard it all.

Word got around that she was telling every entity in town I was a manipulative liar, and she assumed I had been cheating on her the entire time.

For the record, I had never given this woman ammunition to think I was cheating on her. (I'm a wild flirt, but I'll kick that habit to the curb the moment I'm committed.)

She wrote a public, nasty comment on my Facebook page, which, as an internet writer, is a place of work for me.

She even told my best friend I was probably a sociopath. Look ladies, I'm many things, but a sociopath, I am not. I'm an overly-sensitive kitten who cries daily. I can't even watch a movie without having a meltdown because I feel bad for all that the characters go through.

I couldn't believe someone, who had once claimed to love me, would turn her back and spit out such venomous, wicked words about me.

Aren't relationships, even the ones that don't last, gorgeously sacred? I mean, how can someone who was once intimate with you — had sex with you and brushed her teeth next to you — turn around and say the most hurtful words about you to anyone who would listen?

Someone who can roar vicious words about their family will have no problem roaring fire about you, babes.

But regardless of how dysfunctional a person's family is, it's very rare that they can so candidly and easily spew such petty garbage about them — not just after a squabble, but all the time.

A family is your flesh and blood. There is a genetic connection we all feel toward the woman who gave birth to us, no matter how much we butt heads and differ in our political views. It's typically against human nature to hate them because they didn't pick us up from ballet class once (an example my ex used).

If you're dating someone who incessantly talks trash about their flesh and blood, don't think for one minute they won't turn around and do the same thing to you. Like my girl crush said, if their family isn't safe from their shit talk, no one is.

Now, I pay close attention to how the people I date talk about their families, and I've found a pattern: People who respect their parents, despite the way in which they grew up, will have an inherent respect toward their partners.

The first relationship we ever have is with our family. Regardless of how that relationship unfolds, we wouldn't exist without them.

And that's the only kind of person I ever want to be with. Someone who understands that, no matter what we go through, intimacy is sacred and love is unconditional.