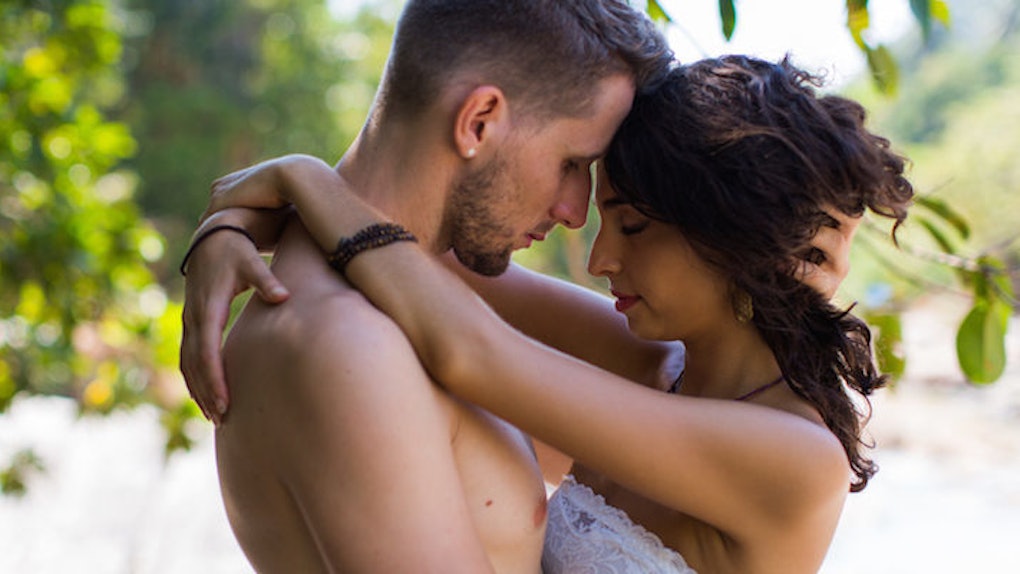 Why I Can't Orgasm With Someone I'm Not In Love With

“Are you sure you’re OK?” he asked me as we took a brief break from fooling around.

My rebound shot me a fake half-smile. I could tell he thought my inability to climax at that moment was due to him doing something wrong. But the truth is, it wasn’t him at all. It was me. And I wish I could have pulled out the no-fail classic “It’s not you, it’s me” right then and there, but something tells me I’d have killed the mood even more than I already was.

Snow softened the ground. February had just begun. I remember it was mid-winter because my ex and I had just broken up, and I thought it best to coin the tail-end of winter “Rebound Season.”

Yes, the only way I could move swiftly on from heartbreak, I decided, was to jump out of my head and into the sheets with someone new. That someone new, I decided, would be a hot Irish guy I picked up at a bar.

My pick-up plan wasn’t as simple as trying to find someone new to focus my attention on. I also intended to reawaken myself sexually. I wanted to feel alive again.

I began to develop a strange bedroom routine with the Irishman.

He'd stimulate me in all the ways that worked for me once upon a time (read: in past relationships); I'd get really close (a little too close) to climaxing, and the moment I felt I was going to "explode" from pleasure, I'd tell him to stop and push him off of me. He'd ask me why, and I'd say it was “too much.”

The habit I formed was a peculiar little habit. I’d finished with a man nearly a million times before. But those “men” were my ex-boyfriend and my ex-ex-boyfriend, two people with whom I happened to be head-over-heels in love. I trusted them with everything I had in me, and they trusted me just the same.

With the Irishman, though, something was stopping me, something seemingly beyond my control. That night with him was the moment I first realized something about myself that would continue to haunt me in bedrooms far beyond the Irishman’s: I can’t orgasm with someone I’m not in love with.

As I came to terms with my newfound revelation, I began to enter the rabbit hole of doom, the spiral of sexual shame. Why can’t I finish? I thought, both concerned about my health and frustrated with my body.

A few days after the incident with the Irishman, I began to dig deep into research.

It turns out I'm not the only one who's ever suffered from performance anxiety in the bedroom. According to this study, 25 percent of women have difficulty reaching orgasm.

Writer Lisa Thomas, LMFT, cites several possible reasons a woman may not be able to orgasm: low levels of testosterone, hormone imbalances, the use of antidepressants or other medications, nuances in her anatomy.

But there's one more reason that has nothing to do with a woman's body and everything to do with her psyche: a voluntary unwillingness, or subconscious inability, to be vulnerable.

In other words, if a woman does not want -- or is unable -- to completely let go in the presence of her man, she will have a difficult time orgasming.

In his book “The Self Under Siege,” Dr. Robert W. Firestone argues that though women may be capable of and enjoy having casual sex, it's also important to note:

“As a relationship becomes more meaningful and intimate, being loved and positively acknowledged can threaten to disrupt one’s psychological equilibrium by piercing core defenses.”

If you think Dr. Firestone’s arguments, there’s something to them.

When we have sex with people we are not in love with, a certain paradox occurs: In order to completely enjoy the moment during sex, your mind and your body must be in a state of complete relaxation, but when you have casual sex with a casual stranger, it's hard not to analyze, then overanalyze, then re-analyze that over-analysis and think to yourself, “Is this person ever going to call me again?”

In other words, it's hard to relax. And having these thoughts could result in potential physical paralysis.

Perhaps that’s why it’s so difficult to make a girl come, even if you are penetrating her perfectly, with your just-as-perfect penis.

If she doesn’t feel comfortable with you, she will most likely feel a certain air of restraint -- or hesitation -- to tell you what she likes and doesn't like.

I mean, can you blame her? She hardly even knows if she likes you.

Last winter, my ex and I broke up. Now, my guard is up, and I don't know how to tear it back down. All I can hope is one day I'll meet someone with whom I feel safe enough to be myself in the bedroom and with whom I’ll be able to climax without any second thoughts.

For those of you ladies who have ever gotten stage fright pre-climax, know that there’s hope for you. If you've consulted a medical professional and weeded out physical reasons as the culprits for your inability, you're most likely plagued with a psychological issue.

And that is something that can be worked through with a therapist, with friends or with the right man.

And with that right man -- and time -- your body will learn to sync up with your head and your heart, and you’ll find yourself riding the train back to Orgasm Central.