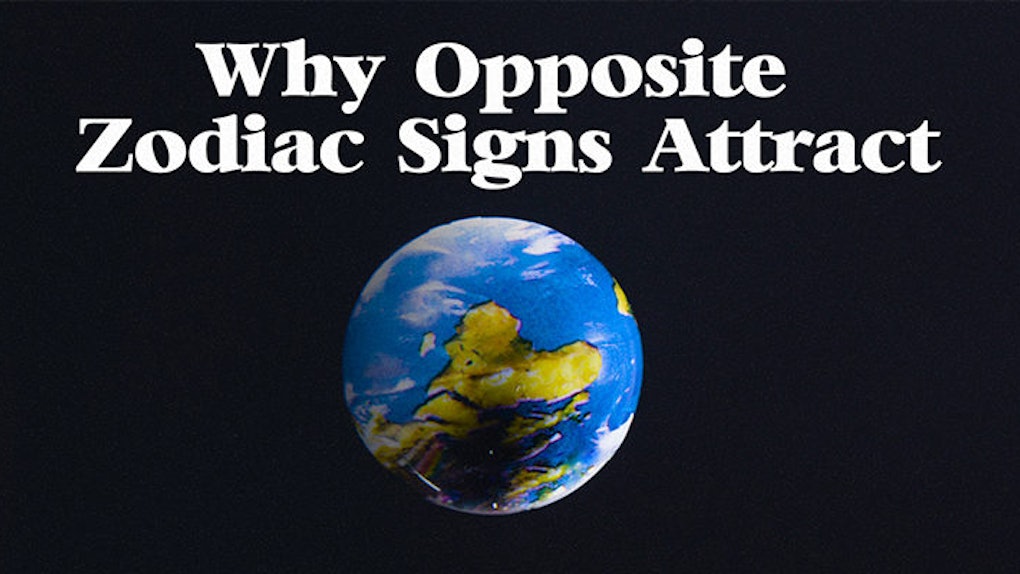 Why Opposite Zodiac Signs Are Actually The Best Matches

Personally, I've always had a thing for thrill-seeking men: rock climbers, surfers or sky divers that asked to be pushed out of a plane while sitting in a convertible. And it isn't just because they all wear Patagonia. (Though, that's a large part of it.)

It's that their lifestyle is the complete opposite of mine.

While I love nature — the occasional hike and the smell of campfire on my clothing — I don't seek physically strenuous activities (unless a foxy mountain man were to ask me).

If I'm being honest with myself, I'm a true sweatsuit-wearing homebody who's afraid of the dark and loves lying in bed until I have to move to put ointment on my bed sores. And I tend to stay away from any experience that statistically brings me closer to an early death.

But the thrilling prospect and interests of someone exactly my opposite feeds the curiosity that I, a true Sagittarius, have.

No matter what sign you are, I think the whole "opposites attract" thing has a lot to do with curiosity and balance.

Maybe someone who seems like your polar opposite has the skills and traits you might lack yourself, but still admire. Thus, the two of you fill your missing gaps, and ideally, you'd become the perfect superhuman.

But that's not always the case.

The opposites attract phenomenon also has to do with keeping some mystery in your relationship. If you're with someone who's too similar to you, the excitement of your partner may actually diminish sooner.

A study from Columbia University found that couples who usually agree with each other may be too close to live comfortably.

For example, two people with a hot temper may find it more difficult to live together because there's no balance between their personalities. They're ultimately living with another version of themselves — both the good and bad parts — which can not only be disastrous, but also pretty boring.

The opposites attract phenomenon also has to do with keeping some mystery in your relationship.

So instead of focusing on finding a mate who's most similar to your zodiac sign, as many usually do, consider dating your opposite.

To learn more about your zodiac sign's opposite and why these signs attract each other, watch the video below.