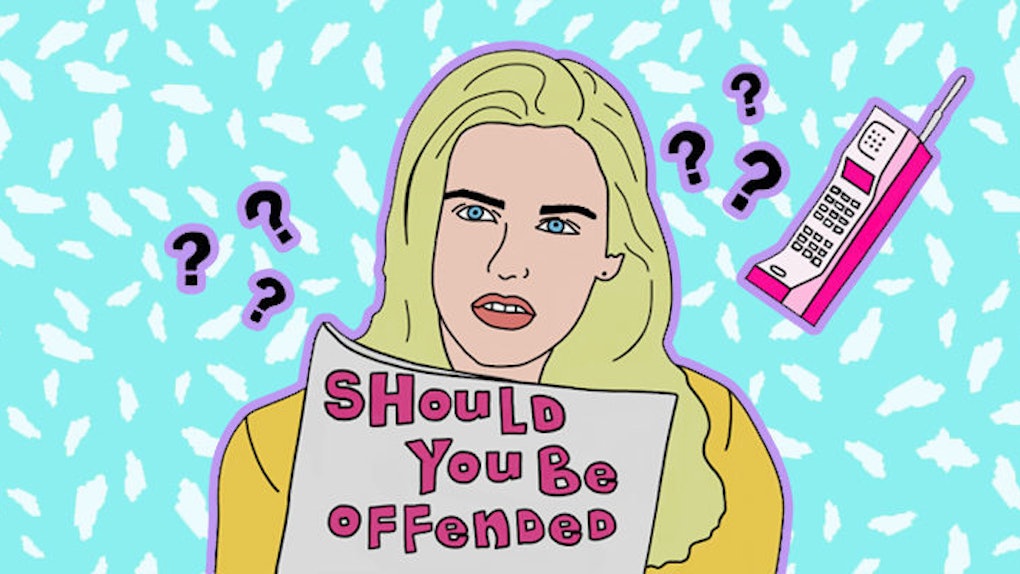 Should You Be Offended If Your Hookup Buddy Only Texts You On Weekends?

I often get frantic texts from friends telling me how incredibly offended they are by something the guy they're seeing did. It's usually a weird, small thing that's driving them absolutely insane. But they're not sure if it's actually a big enough deal to be going this crazy over, so they ask all their friends what to do. I call it the “Am I being crazy?” convo.

You know the convo I'm talking about: It's the one where you're very clearly so offended by whatever small thing has happened, but that little, rational part of you knows this isn't necessarily the biggest thing in the world. So, you wonder, “Should I be offended by this?”

Obviously, the answer to this question is “yes.” If you're feeling something, you should let yourself feel it. More than that, you should be able to be honest with your significant other about what's offending you without worrying about whether or not you “should” be feeling that way.

But that truth doesn't stop us from freaking out and asking all of our friends whether or not our offense is merited. So, I've decided to streamline this process for you with my new weekly column, “Should You Be Offended?”

It's like the group text you send out to all of your friends, but way better because it's with way more people.

For this week's installment of "Should You Be Offended?" we're going to answer the question of "Should you be offended if he only texts you on weekends?"

You and this guy have been hooking up for a few weeks now. Let's call him "Tom."

You met Tom at a bar on a Saturday, and the two of you hit it off immediately. You went back to his place that night, and the next morning, the two of you spent hours hanging out in his bed, just chatting about life.

You texted for a bit on Sunday when you got home, recapping the night. Then, boom: silence... until the following Friday, when you got a "hey" text from him at 2 am.

The two of you met up drunk, and again, FIREWORKS. You had another great night together, and this time, you even hit up the farmers market together the next day, like a real-life couple!

Then, radio silence all week until, AGAIN, you are getting ready to go out on Friday night when you get this text on your phone:

Part of you is relieved he texted. I mean, it's not a booty call or anything. It's 9 pm. You're getting ready to go out, so you're happy he wants to take your schedule into account so early on.

But then, the other part of you is mad. Why was he silent all week long? Why are you just hearing from him now? How long is this going to go on for before it just becomes blatantly rude?

Obviously, if you're offended and upset, you should let yourself feel that way. There's no right or wrong way to feel. But if you really want a second opinion here, I GOT YOU.

I asked 53 trusty men and women (between the ages of 20 and 52) about whether or not you should be offended. And here's how they responded.

The vast majority of respondents (66 percent) agreed that, yes, you SHOULD be offended if he's only texting you on weekends.

Only a mere 16 percent of respondents thought it was no big deal, and that you should definitely NOT be offended.

And what about the remaining 19 percent? Well, they had some mixed opinions on the matter. All of their explanations seemed to echo one of the following statements:

Depends. Have you talked about being exclusive? Do you want more? Depends on what both people want. But usually, the answer is 'Yes, be fuckin' offended.'

Depends. If he's booty-calling me at midnight, then yes. But if he's texting to make plans during the day, then no. He could have a super busy workweek schedule.

Basically, there are two possible exceptions for this situation in which you shouldn't be offended: first, if his weekend texts aren't booty calls, or you're not looking for anything more out of the relationship.

But again, if you want one clear cut answer, the majority of respondents did agree that you should be offended.