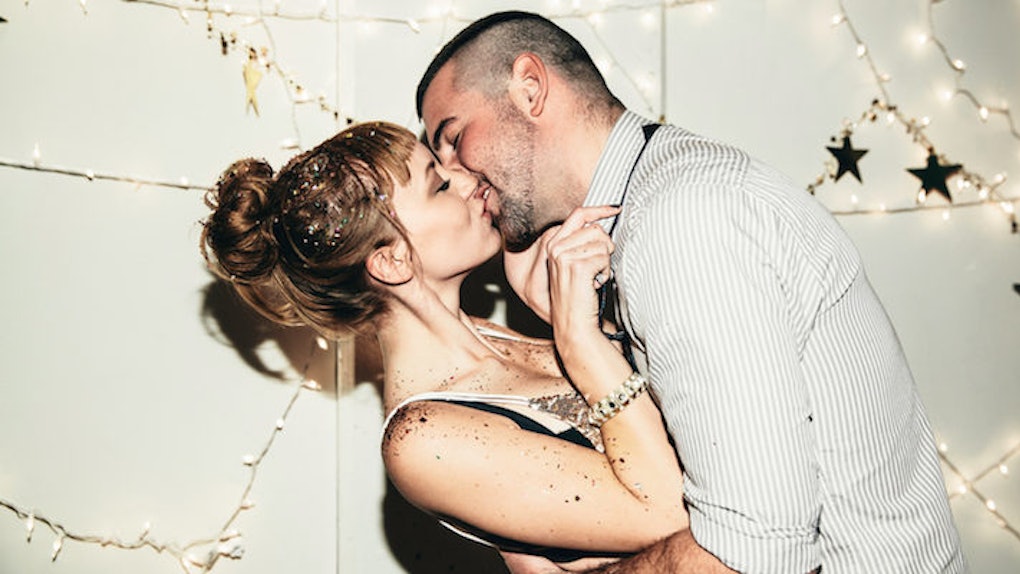 The Struggles Of Needing Someone But Wanting Everyone

I was born a sorely hopeless romantic.

I'm a girl with a massive, oversized imagination. I live for the big feels. I'm drawn toward the highest peaks of pleasure and the darkest depths of pain. The in-between just doesn't do it for me, which is why I'm so direly drawn to the idea of love.

The middle stuff is boring. The extremes fascinate me.

That being said, I was in no way, shape or form the little girl who closed her eyes and had picture perfect dreams of a traditional white wedding with a handsome knight in shining armor.

I had my own vision of what love looked like. It didn't look at all like a f*cking white picket fence.

However, every single time I found another person, regardless of how seemingly daring and exciting she was, I had this inner feeling of restlessness that I just couldn't seem to shake away.

No matter how hard I tried to soak in the love, my eyes always looked elsewhere.

My head would endlessly coach my heart: "This is what you want. This person is nothing short of amazing. Calm the f*ck down, and bask in this oh so rare love."

But regardless of what my mind told my gut, I had an irrepressible feeling lingering in my veins. An all-consuming sensation of dread. An underlying, unshakable feeling of missing out.

I was caught up in the struggle of needing someone, but wanting EVERYONE.

If I stripped away my hardened exterior, I knew I craved something deeper than just the quick-fix high of temporary lust, late-night adventure and five-minute flings. But I was overcome with anxiety in every monogamous relationship.

What if I was missing out? What if I was compromising? What if I was wasting my time "settling" with the wrong person when I could be out living my own independent life, freely enjoying the sweet taste of a new body?

When you're a strong person with a laundry list of interests that aren't dependent on other people, being in a relationship can feel stifling. It can feel like you're tied up in proverbial chains, even if your partner is the most independent, free-spirited entity in the world.

As much as you know this loving relationship is exactly what you want intellectually, viscerally it's a seemingly bottomless pit of never-ending questions, ever-pressing fear and relentless doubt.

You want love, but you lose to lust.

You want to fall into the warm sea of love. You've tasted love before, and therefore know in the deepest part of your gut that there is nothing more than the pressing pull of L-O-V-E.

You want to experience love with a fervent fever. But you're so distracted by the city and the way it lights up with an endless surplus of brightly burning bodies. Each and every time you think you're finally ready for love, you teem with temptation for sex.

You need stability, but you crave novelty.

Your life thus far has been anything but consistent, so you know your heart, your soul and your sanity need something to count on. Someone who is actually there for you when you need him or her, not just when it's convenient.

But you're so used to this wild inconsistency that when you're confronted with something stable, you run like the f*cking wind. You run toward what is familiar: Excitement. Novelty. Danger. Recklessness.

All of which you know is fleeting, leaving you reeling in pain when the fire, is inevitably snuffed out.

You need someone to hold, but you don't want to be held back.

It's hard going to sleep alone each night. You desperately want a warm body nestled up next to you. You crave affection from a familiar entity. You crave a touch that attains a meaning beyond sex.

However, you're so afraid that if you end up in a relationship, you will end up just like everyone else. Held back and tethered.

You're afraid that when “I” becomes “we,” you’ll lose the fearless independence you've worked so desperately hard to cultivate.

You want to settle down, but you're afraid of settling.

You have dreams, not of a white picket fence and a smattering of sandy-haired children, but of a fellow free spirit.

God knows you've slept with enough people. You've dated more than enough of the "wrong" people. There is no longer a romantic pull toward a toxic relationship. You're finally ready to settle down with someone who can make your heart soar, whom you can depend on.

But you're so afraid you want it all so bad that you're going to confuse the want for love for actual love.

You want the one, but what if there is more than one possibility?

Everyone talks about "The One." But what if there is more than just "one" person who can complete you? That's the real fear.

You want the right person, but you are so scared of being wrong.

You've seen people find their other halves. The people who are oh-so-clearly "right" for them.

You've seen it, and when it works, it's f*cking amazing. It's mind-blowing. It's the most beautiful thing on the planet.

But you've also seen close friends end up with the wrong person. And they have built a life with someone who is so inherently wrong for them.

Yet they will never leave. Because once you build a world with someone, how do you attain the strength to leave him or her and start over?

It takes years to build a life together. How can you bear the thought of picking up the pieces and starting over?

You want someone to take your call, but you don’t want to answer to anyone.

You want someone you know will pick up the phone and be there for you, any time of day or night.

But you're not sure if you're ready to answer to anyone just yet.