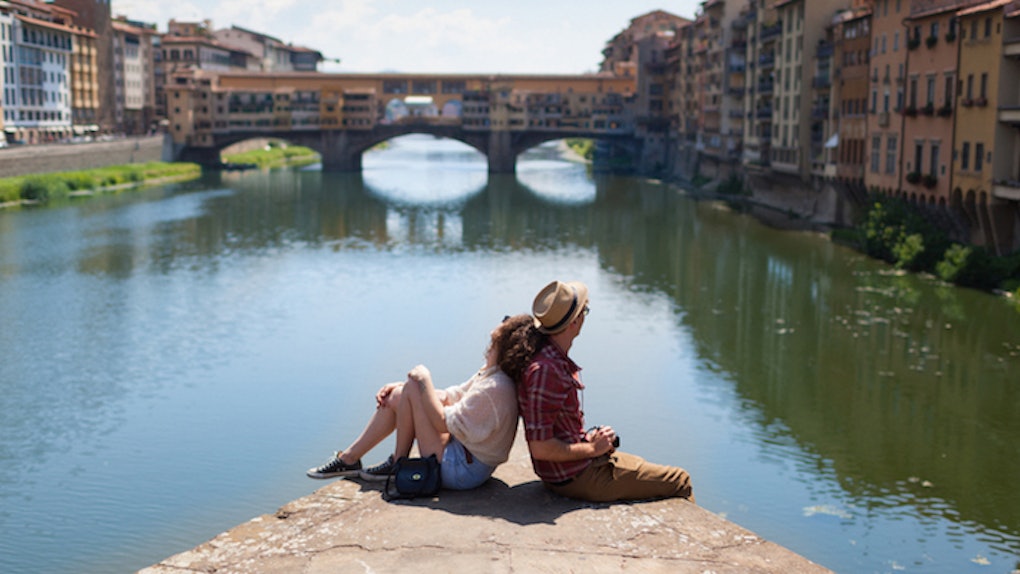 New York has been my home for 26 years.

I've seen it all. I've seen this city at its best, while looking out at a sunset on a perfect July evening from a swanky high-rise I had absolutely no business being on.

Of course, I've also seen the city at its worst: a December day so cold, your ears turn red, even if you're brown-skinned like me and physically can't turn red.

But just like anything in life, too much of a good thing isn't always healthy. It's because I love New York so much that I'm saying goodbye to it.

It's because I love New York so much that I'm saying goodbye to it.

IMO, vagabond life is a bit extreme, but I think everyone should move every few years. Relocating keeps you on your toes... and totally expands your dating pool.

Finding love in New York City is no easy feat for anyone. With its bustling bar scene and rampant hook-up culture, trying to lock it down with a guy you think you hit it off with kind of seems like putting a nuzzle on a wild animal.

But it's partially my doing that I'm single, too.

See, within the past few years, I've gotten a little too comfortable here, which can be a dangerous thing. When you get too comfortable, you grow tired of seeing the same faces, going to the same places and, eventually, running into every single one of your exes on the street.

Eventually, you give up on looking for adventures in love and retreat inwards.

Maybe you become a homebody. You don't find comfort in the nitty gritty of your city — you've been there, done that — but in the smaller things, like cinnamon-scented candles in your very own apartment.

Not leaving your pad, it turns out, kind of kills your dating game.

You quit Tinder because enough men have fallen short of your expectations. You don't meet men at bars since you know exactly what type of guy to expect at nearly every single one.

That weirdo taxi driver playing the flute while driving you around — which would've shocked you shitless when you first got to this city — no longer shocks you. At this point, he's probably the 15th weird taxi driver you've ridden backseat with.

And gradually but inevitably, you realize you're no longer meeting new people because the city that once thrilled you is no longer thrilling you. It's just boring you.

Boredom got me to pack my bags and trek to Europe by myself.

The experience opened my eyes. It made me feel more alive than I'd felt in a long while. There were so many mountains to climb (literally), rivers to swim in and grungy dive bars to drink at. There were so many conversations about things I know something about with people I know nothing about.

In a new place, where everyone's a stranger and every museum is unexplored, you crawl back out of yourself. You feel like a different person because your heart is much more open. Chance meetings become a ~thing~ again because of your newfound openness to experience.

In a new place, you crawl back out of yourself.

My time in Switzerland proved new stimuli was just what I needed to take my dating life by the reigns.

In this unfamiliar city, I was open to any experience being thrown my way because I didn't know what to expect. And sure enough, while roaming around aimlessly with just a map, I met a great guy. He showed me the opera and Zurich's edgy, artsy district I never would've known about had I not met him since it wasn't a tourist destination.

Our evening together was a whirlwind and a half. It injected a new enthusiasm, a kind I wanted to keep. New places, I learned, teach you great dating habits. They remind you how precious time is and of the adventures you're capable of having with the most unexpected person.

When I got back to New York, I really wanted to notice the men around me more instead of just whizzing past them like I did before going to Switzerland. But it wasn't long until they were whizzing past me once again — even ones who could have been great for me.

It's hard to leave a place you've called home for so long. But it's a big world out there, and your heart deserves to explore all the people in it.

So, I'm letting mine explore it.

It's a big world out there, and your heart deserves to explore all the people in it.

I've never lived anywhere except New York, so I can't definitively say hopping a plane to a new city will help me find love. What I can definitely say is I'm sure I'll feel inspired again. And as they say, inspiration breeds romance. (OK, maybe no one says that except for me.)

They say it's usually when you live your best life that you meet someone worth starting a life with. I'm moving to challenge myself, pursue my wildest dreams and continue to explore what it is I want out of life.

And if you're up for a life makeover, moving might just be your ticket to love.