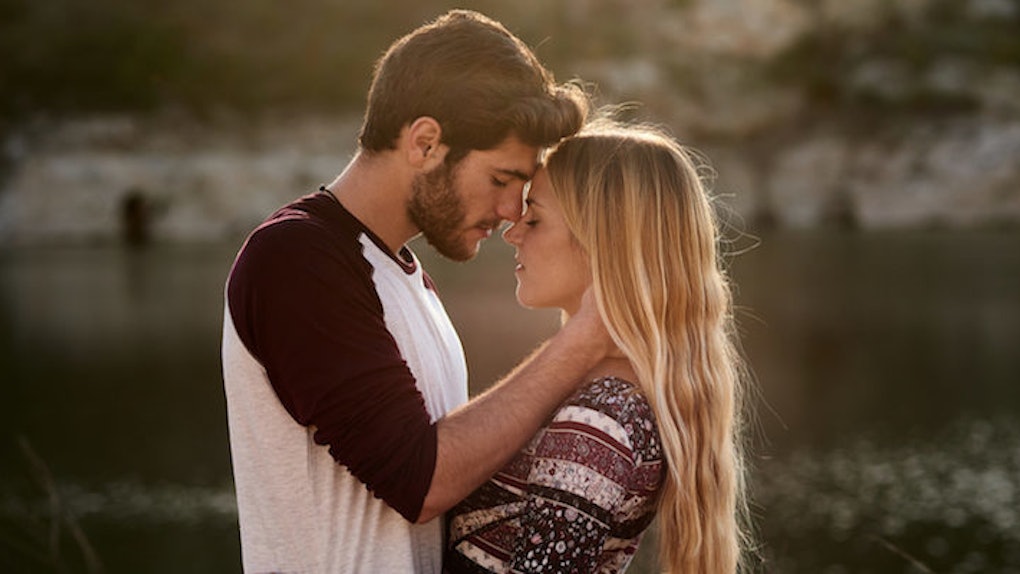 9 Signs You Are Probably Going To Marry Your Girlfriend

You see it in movies. You hear about it from your parents, or aunt and uncle, or friends' parents. You read about it online, the moment when so and so “just knew she was the one." The moment when a man says to himself, “Yup, that's the woman I'm going to marry.”

This time of realization can come in many forms: Maybe the two of you were drinking beers together on the couch in just your underwear and white T-shirts, and you realized you're the happiest you've ever been; maybe all of your boys were burping at the dinner table, and she out-burped them all; maybe she recited the batting order of the 1986 World Series-winning New York Mets.

Regardless, there's a time in every man's life when he does, in fact, "just know."

And in case the moment hasn't hit you yet, fellas, and you want to be prepared, check to see if any of these nine signs are present in your relationship because if they are, well, you're probably going to marry your girlfriend.

1. You watch at least one of “her” TV shows and are genuinely into it.

“Ughhhhh, we're watching 'The Bachelor' again?” turns into “There's no way Ben picks that chick. He and Lauren are F-ing PERFECT for each other.”

There's no shame; it happens to the best of us. Plus, Ben and Lauren really are perfect for each other. But the fact of the matter is, you want a relationship based on mutual interests and a desire to connect.

It makes sense that you would either take a genuine interest in something your girlfriend likes despite what the patriarchy might dictate or make an effort to enjoy something she likes as a way to connect.

Also, let's face it: A big part of married life is you and your wifey sitting in front of the TV. Better learn to like the same shows.

And don't watch "your show" without your significant other because that is messed up.

2. You are or could easily see yourself moving in with her.

If you already moved in with your girl, you shouldn't even be reading this. You're already wifed up.

But for those of you who aren't, if moving in with your significant other is something you can really see yourself doing, that's huge. That means you'd rather forfeit any alone time you used to get in the comfort of your own home for more time with her -- a telling realization in any relationship.

Apart from giving up your solitude, once you move in with someone, it's very hard and messy to un-move in with her, so to even flirt with the idea of such a commitment with your girlfriend is very revealing of your feelings toward her.

3. You guys exercise together.

I wouldn't say exercising together is a must, but I will say that if the two of you DO exercise together, you are absolutely getting married.

Exercising together is just one of those “perfect coupley” things to do together, much like apple-picking, picking out furniture...other types of picking.

You can substitute exercise for one of those REALLY coupley things, but the point is there is a tier of things couples do based on the love and prospect of marriage between them, and exercise is at the very top of said tier.

So corny, but so true.

If you're in a loving relationship destined for marriage, those things you share with your best friend should also be shared with your girlfriend, making her -- through the transitive property -- one of YOUR best friends.

I'm not saying she should take the place of your boys or that you should be able to say anything to her that you would with your guy friends, but she should hold a similar place in your heart and in your life as your best friend.

The “best friend” void should be one of the many voids in your life she fills.

5. If your friends knew "the voice” you use to talk and text her, they'd make fun of you forever.

You know what I'm talking about, guys. And if you "don't know," you're either too afraid to admit it or haven't met her yet.

The extent from guy to guy varies, but the way a guy talks to the girlfriend he's going to marry always changes from that of his voice with his friends or co-workers.

Maybe you speak to her in a slightly higher pitch than you do everyone else; maybe you call each other pet names that would make you the laughing stock among your boys for life; maybe you are open about your insecurities with her and are just allowing yourself to be vulnerable because you have feelings, too (wuss).

6. You'd rather sleep with her than without her.

Much like moving in together, wanting to sleep with her is crucial on many levels.

One, it's a physical compatibility you need to have. Traditionally speaking, you are probably going to be sleeping together virtually every night (providing you don't f*ck something up and end up on the couch). You need to physically make that work.

If one of you snores, you better get breath strips or she better get ear plugs and be willing to put up with that. If one of you hogs the blanket, you need to prepare for that, too.

But more importantly, if it isn't enough for you to not only spend the day or night together, but also sleep and wake up in the morning together, well, you're in deep.

This is a huge tell as to whether or not you and your girlfriend are marriage material.

Too many couples cut each other down in front of their friends, families or right in front of each other's faces. Your significant other isn't supposed to be this opposing force in your life; he or she should be someone you take pride in, as a person and an extension of yourself.

When you're truly proud of your girlfriend and start to see her as an extension of who you are, then you know that's the woman you're going to marry.

8. She makes you laugh and may even be the funniest person you know.

I think people underestimate the bond shared between two people with the same sense of humor. If you can make each other laugh, you two will be inseperable. You might as well be running a 5k together (point three reference).

But seriously, to be able to connect on such a joyous level is an incredible thing. Not to mention, a lot of fights start when one person in a relationship finds a joke funny and the other doesn't. And more senseless fighting is usually indicative of incompatibility.

9. You still smile every time you see her.

Ultimately, with the woman you love, there is a feeling you experience the first time you really see her that never goes away.

And when you do realize that, you'll "just know she's the one," too.