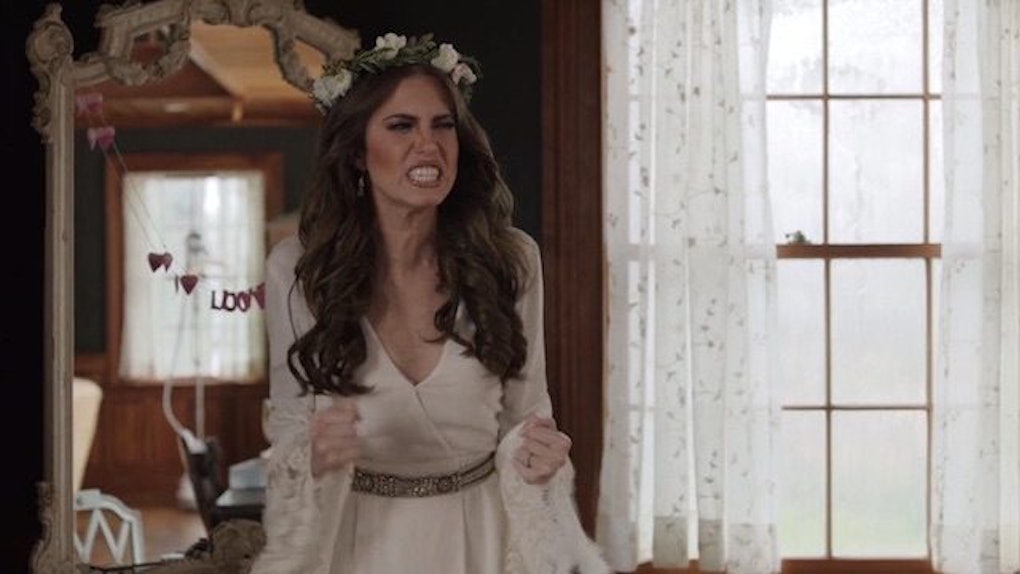 Maids Of Honor Share How They Battled A Bridezilla

After you accept the role of being the bride's side chick during her wedding adventure, you may handle a lot of the unexpected drama and requests that float your way.

Paying for an exotic bachelorette party? Sure, that may seem doable.

Buying a bridesmaid dress that you will never ever wear again? OK, you may even be cool doing that.

But what happens when the bride turns from a semi-demanding human being into a complete bridezilla? Well, you may find yourself wondering how in the world to deal with the crazy, downright insane requests coming your way.

If you're looking for a little help, take notes of how these maids of honor battled a friend-turned-Bridezilla.

I literally ignored my friend-turned-bridezilla when she lost her mind. She started demanding that we spend every single Sunday at her apartment doing wedding things. We had to be there are 10 am sharp… or else. Like, what the hell? Sundays were my day to chill. I stopped going and answering any of her texts. She threatened to kick me out of the bridal party — which I was happy about. She threatened to never talk to me again — which, at that point, I was also happy about. Finally, after two weeks of not responding to her crazy texts and messages, she stopped by my apartment and was hysterically crying when I opened the door. She admitted she was out of line with all her requests, and we had a heart-to-heart. It worked. From there, she calmed down, and the rest of the wedding process with her was fine. She asked me to keep in her line, and I did by telling her when she was asking too much or being demanding.

I was a maid of honor last year for my cousin, who usually is, like, the sweetest person ever. She's super laid-back in real life, but for her wedding, she was an insane nightmare. She emailed us that we all had to buy matching shoes for the wedding that were $250.  She told one bridesmaid to change her hair color from ombre pink to all blonde. I texted her one day to meet up and told her, “You need to seriously chill.” She admitted that she was wrong with some of the things she asked us to do. I told her she needs to find a calm way to approach her wedding and maybe take an occasional Xanax, which she started doing, and she snapped back into her normal self.

We staged an intervention where we went to her house, sat her down and told her she was being awful.

3. I staged an intervention.

Everyone has a bridezilla story, but mine is the worst. I was the maid of honor for my best friend from college. She was always super Type-A and controlling, but for her wedding — wow — she turned completely into a monster. It got so bad that all of the bridesmaids emailed me threatening to leave the bridal party. The bride — no joke — asked us all to go on a diet and lose between five to ten pounds before the wedding. She told one bridesmaid, who was pregnant, that she was allowed to be a bridesmaid but not allowed to be in any photos because she looked fat. She made the groom get a nose job right when they got engaged. She literally sucked. So when everyone threatened to quit, I, as maid of honor, decided to fix the situation. We staged an intervention where we went to her house, sat her down and told her she was being awful. She was so mad at us and didn't listen to anything we said. In the end, three out of the seven bridesmaids quit and the rest of us just kept our mouths shut and suffered until the very end of her wedding. I don't talk to her anymore, except for when I see her at family events. I'm still dumbfounded over the whole experience.

4. I was a bridesmaid-zilla back

I wasn't going to be treated like crap by a bride, so I became a bridesmaid-zilla back. Whenever she treated us awful, I acted like a 4-year-old and had a temper tantrum to get her back. She made us get these ugly updos, which we had to pay for, and I literally made the hair people redo my hair three times and made a scene. I was the reason the ceremony started an hour late. The bride was so pissed at me, but I think she eventually caught on to what I was doing and chilled out a little. The whole thing was a headache, and I know I acted immature, but she was the worst.