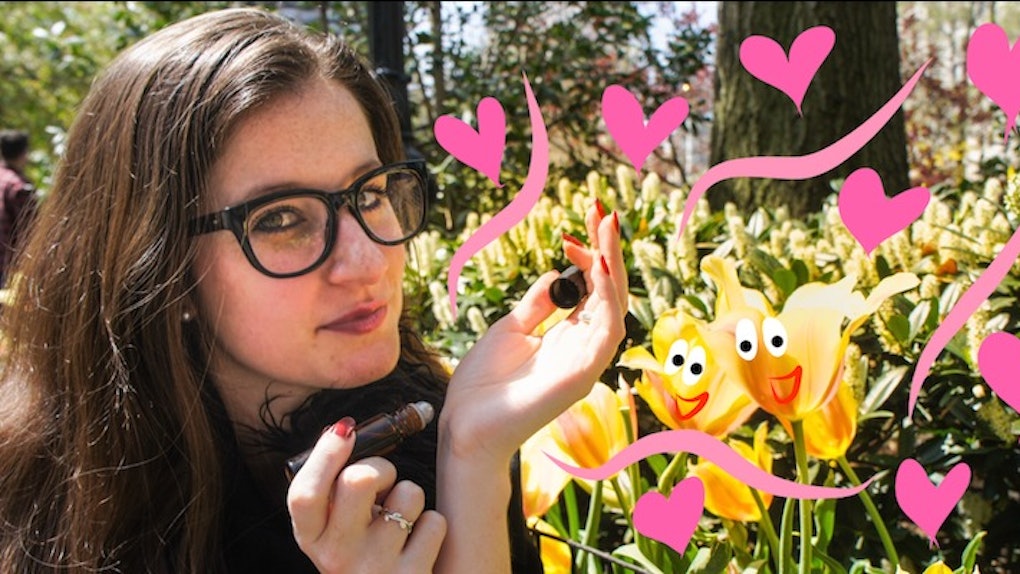 I Made Aphrodisiac Perfume To Inspire My Boyfriend's Boner

“I'm just trying to inspire your boner,” I gleefully told my boyfriend as he escorted me to Brooklyn for my aphrodisiac perfume-making class. “Anything I can do to up the lust factor, I'm going to do it!”

He shook his head laughing, kissed me goodbye and left me at the Brooklyn Shoe Space, where I was going to embark on a magical journey of scent and explore my senses and increase my sensuality. I was f*cking excited.

When I found this class on Course Horse (which I peruse for weird and exciting sh*t to learn), I was immediately intrigued by the description: “HEART OPENING, RELAXING, CREATIVE, SENSUAL."

As I kept reading, I saw this class promised me that I could make my own perfume using aphrodisiacs that would enhance my sex appeal. For those of you who don't know, an aphrodisiac is something that simultaneously inspires excitement, euphoria and attraction. An aphrodisiac increases blood flow and stimulates the pleasure centers of the brain. A lot of different things, like food and music, can be aphrodisiacs. I was learning that essential oils can, too.

So ... I could dab scent on my wrists and get more dick? Sign me the f*ck up.

The Brooklyn Shoe Space was quite the quaint little workshop. Despite being located in Williamsburg, home of the hipster, the name was NOT ironic. It literally was a shop where these two cool dudes make shoes by hand. (OK, so that is kind of hipster, but it's still very dope.)

I was the first student to arrive so I had a chance to chat with Aba, our instructor. An aroma therapist, she was tiny like a ballerina. She had delicate hands, hair braided into a hundred vines and possibly the most even-toned skin I had ever seen.

She couldn't be much older than me, but who knows -- maybe she had magical powers from all her work with oils and herbs and sh*t.

I asked her to tell me what she loved about aphrodisiacs. She said that there was much more to them than inspiring sexuality. These essential oils open your heart and chest in the same way that yoga or meditation does. They help to alleviate stress and center your soul.

OK, so I was definitely here for (hopefully) many future boners, but this was good information to know.

Then four beautiful ladies in flowing dresses (hey, it's Brooklyn, what do you expect?) walked in, and class was underway.

Aba gave us a lengthy syllabus for class that was filled with all of the information we'd need. First we learned WTF an essential oil actually is. Essential oils are oils that are extracted from delicate flowers and plants through steam. We would also be working with absolutes, which according to our syllabus “come from volatile, aromatic fluids extracted from plants using solvents such as hexane, ethanol or menthol.”

Absolutes are different from essential oils in that they have a higher density of colorants and waxes, making the aroma more true-to-nature. You have to use the solvent, because these flowers are too fragile to be distilled.

As you can see, I am clearly an expert now. LOL.

We then moved on to smelling different essential oils. We tested each scent on a blotter and wrote down what we smelled. Was it woody, earthy or citrus? Was it flowery? Was it herbal, sharp or soft?

We jotted down notes before the scent was revealed to us. (Sandalwood smells like ass, BTW.) When we guessed what it was we were smelling, I was wrong most of the time. Whatever.

Aba also had us use pepper shakers full of coffee beans to “cleanse the pallet” if we experienced too much sensory overload.

There are three parts to making this perfume: top notes, middle notes and base notes. We were told to combine two or three notes in each category. Any more than that, and you'll probably end up smelling like a sweaty gym sock. That's my assessment, anyway.

Top notes are the first things you smell when testing a perfume. They're also the first to fade. Aba said to think of top notes as those first sparks with a new lover. They're what draw you in.

We tried these aphrodisiac top notes, which the syllabus described as such:

Ylang-ylang: feminine, softening, heart-opening. (Also, this isn't in the syllabus, but it smells like f*cking heaven. Like, if love had a smell, it's this sh*t.)

Middle notes are what make you more curious about a scent. They make you want to learn more and get another whiff. They are the focal point of your perfume. We tried these aphrodisiac middle notes:

Rose Otto: Heals emotional wounds, repairs trust and is known as “The Queen Of Love.” (Clearly, I was using the f*ck out this one).

Orange blossom: relieves nervousness; encourages one to be present.

Ginger: boosts circulation and have a warming affect on the body.

Finally, base notes provide the foundation of your perfume. If base notes were lovers, they would stick around even when the other, initial attractions wore off. They're the smells that linger the longest. We tried these aphrodisiac base notes:

After we had our share of scenting, and after I had wiped my face with alcohol 50 times because I couldn't stop smacking myself in the face with my blotter (I don't have great depth perception), it was time to make our perfume.

We all starred things we liked after each scent test. I am a very decisive person, so I knew exactly what I was using. I like to keep things simple, so while the other ladies were mixing up earthy-smelling concoctions, I decided to go for a simple, intoxicating and feminine aroma.

To put the perfume together, you go from the bottom up: base, middle, top. You add in the oil drop by drop until you are satisfied with your scent. You don't want to overpower your notes with too much of something.

My perfume was made of jasmine grandiflorum for a base note, rose otto and orange blossom for the middle notes, and ylang-ylang (or, as I like to call it, what dreams are made of) for the top note.

After I added varying drops of each, both Aba and I smelled my perfume. It was missing something. It was just TOO girly and flowery.

“Labdanum!” Aba declared. So we added in some spicy, burning, warming AF labdanum. And oh my bonkers, did it work! The scent totally grounded my perfume.

It was a smashing success. I decided to name my scent The Princess Of Sex, because it is both feminine and sexy -- like when you were an ultra-girly summer frock and are still super f*ckable.

Per Aba's suggestion to "be a babe," I rubbed it behind my ears, on the back of my neck, over my heart and above my belly button.

I was ready to be ravished by the time bae picked me up. I had him smell me.

“It smells good," he said. It was not the reaction I was hoping for. I'd just spent two hours of my Sunday afternoon making perfume. I expected a rock hard boner.

Update the perfume I made in Williamsburg today is liquid sex. — GigiEngle (@GigiEngle) April 24, 2016

“IS IT SEXY?” I was really looking for confirmation now. I needed to KNOW.

“It's nice,” he said. “It smells like baby powder. That's what I thought first.”

“Yeah, it smells like some kind of combination of flowers and babies," he said and continued to stroll along, unaffected.

I love the man, but he is clearly insane. This stuff smells like lilacs and heaven. Whatever, bae.

Also update: did not give bf a boner but he likes it because it smells AMAZING. — GigiEngle (@GigiEngle) April 24, 2016

All right, so my perfume didn't make my boyfriend overcome with lust, but it does smell f*cking GREAT. I'm going to wear it all the time. For anyone curious about essential oils, you'll definitely learn a lot from this class. I basically have a Ph.D. in essential oils now.