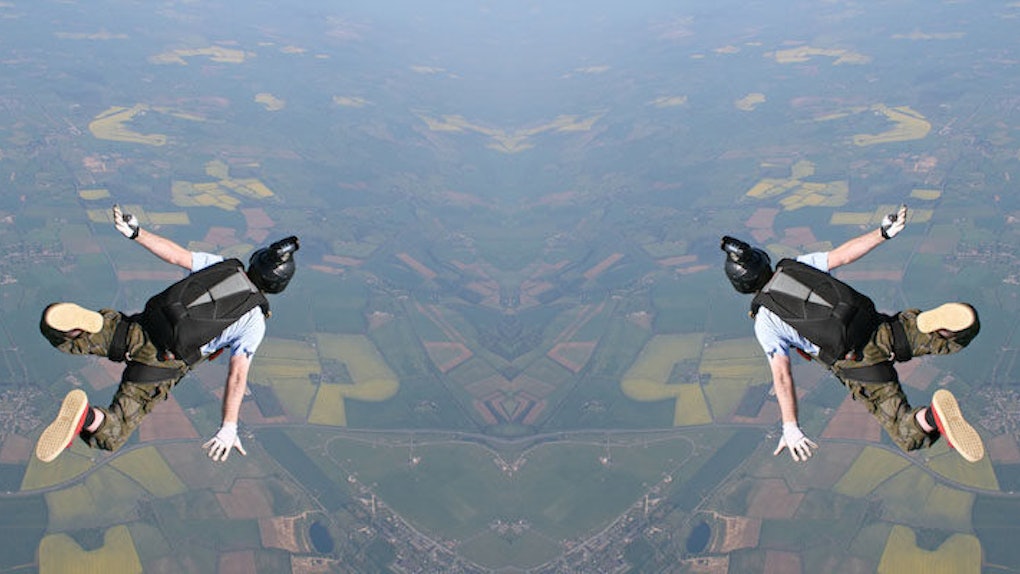 Take The Plunge: 5 Reasons Skydiving Is Exactly Like Falling In Love

You're staring down at the clouds.

They've never seemed so close before.

Sweat drips as your eyes widen at the sight of the never-ending sky.

Your legs dangle precariously from the edge.

The wind blows harder. You feel your heart beat faster.

You're breathing heavily and hastily. Suddenly, you hear the signal.

This is the level of trust you need to find with true love.

Great relationships require two people prepared to make their hearts as vulnerable as parachutists soaring through the sky.

What if you could both be as committed as a skydiver with complete trust in his or her parachute to protect him or her?

You could only succeed as a couple.

You'd enjoy every second of your exhilarating experience together.

Sadly, it's not as simple as sounds.

Most people aren't prepared for a perfect relationship for the same reasons they're not prepared to jump out a plane.

Whenever you're preparing to jump, there's this fear that the parachute will fail.

This unpredictability is partly what makes the leap of faith so fulfilling.

But, it also prevents people from leaping, and it makes people leap improperly.

If you focus on your parachute's potential faults, you panic. You make dumb decisions. You're in for a rougher ride.

The same goes for relationships.

We worry our partners will fail to protect our emotions, so we jump into relationships half-heartedly.

We're too paranoid to let another person look after our hearts, and we can't treat him or her with complete trust.

That's when the cracks appear.

Let's say our skydiver had a huge selection of high-quality parachutes to choose from.

He'd bought hundreds of parachutes, tried them all and learned what he liked best.

Would he have more faith in the parachute he took to the plane?

He'd know all about the density, reliability and what works best with his body.

If parachutes failed as often as marriages did, he'd probably spend decades choosing the right one.

Yet, despite the United States' distressing divorce rate, there are still way too many men settling down with the first women who fall for them, and vice versa.

How are we meant to find the parachute that fits best, if we only try four or five of them?

4. The First Rule Of Skydiving

If you're not prepared to fix a failed parachute, you're not allowed to jump. Period.

You typically go through two full days of preparing to fix a failed parachute before you're allowed in the plane.

You have to be completely at ease plummeting without a parachute.

You need to have no problems breaking free from your faulty parachute and finding a spare.

This should be the rule for relationships, too.

How are you meant to be the parachute for another person if you can't even solve your own problems?

The relationship that feels like floating through clouds requires a confident couple.

It needs two people who are cool and composed when things go wrong, but are also willing to walk away when treated too poorly.

No problem is too cumbersome for a couple with these characteristics.

If it sounds like you're the skydiver described in this article, you're ready for an incredible relationship.

Even when you find the perfect parachute to place your faith in, you'll still be a little scared.

But, that'll be nothing compared to the excitement of the experience ahead.

Become that ultra-reliable parachute for your partner as well, and you'll plunge into a perfect relationship.