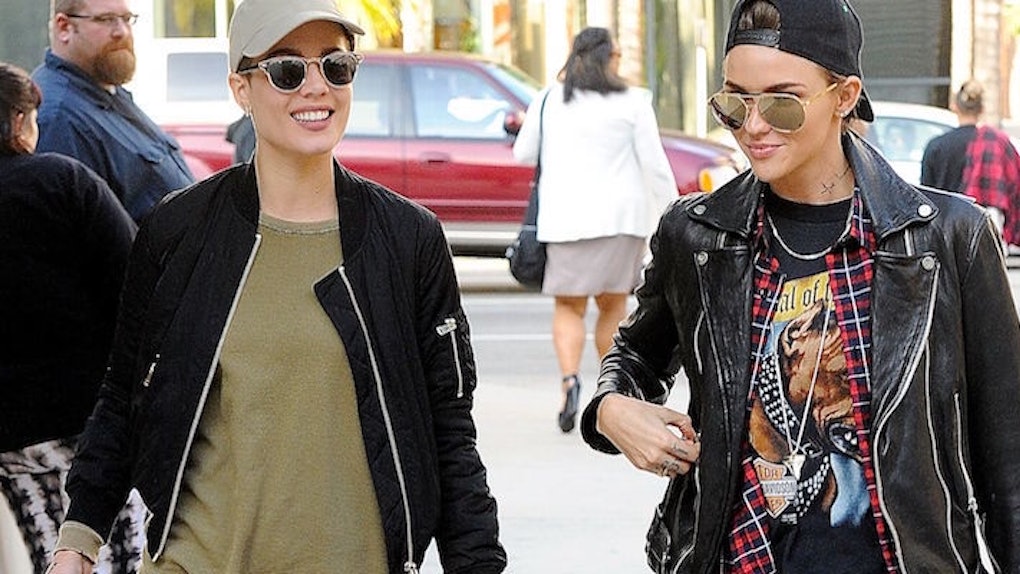 I came out to my mother seven years ago. I was so terrified, I drank an entire bottle of champagne and still felt stone-cold sober.

But you know what? I did it. And while it was a pretty emotionally draining night, I felt so much better.

Little did I know, while coming out is most definitely a difficult part of being a new gay, the real hardships were only just beginning. I needed all the lesbian tips I could get.

But even though I had a "newly-out" glow lighting up my dull face, I was still super isolated from the gay scene.

Oh, I definitely wanted to go to gay clubs. I wanted to have one night stands. I wanted to sext and flirt and have other lesbian friends to share my sapphic experiences with.

But I had zero lesbian friends.

I had some hairdresser gay boys I adored, though. And I thought, surely they had some dyke friends I could pawn off them, right?

"Bitch, no" was the response I got. It was the first time I discovered the great divide between lesbians and gay men (which has since evolved, and in my world, we coexist beautifully).

So next, I scanned through the ladies in my life.

"We support you! We will totally come to the gay bar with you!" they all squealed, twirling their imaginary engagement rings around there dainty fingers (no lesbian has dainty fingers).

But the straights never came to the gay bar with me. When it came down to it, they were seeking the same thing I was seeking: hookups, honey. And just like I was shit out of luck at the straight bar, they weren't getting any ass at the dyke bar either.

But even though I felt like was doomed, I still managed to throw myself out there.

Of course, there was a lot of trial and error and embarrassing moments, but I figured it out, eventually. I found myself waking up one morning, realizing I had a ton of lesbian friends and a fully realized lesbian life.

It's imperative to have lesbian friends because there are certain things only they will understand.

I didn't neglect the straight people in my life, but I realized it's imperative to have lesbian friends because there are certain things only they will understand (like the tendency to U-Haul or the fear of long fingernails).

So here are NINE lesbian tips for the newly out lez who wants to get in on the lez scene:

Go to the gay club by yourself, grab a drink and park yourself by the bar. Don't be afraid! If people ask you why you're there alone, just say your date stood you up. People will feel sorry for you and invite you into their tribe.

Go to the gay club by yourself, grab a drink and park yourself by the bar.

By 2 am, you'll have a whole new group of gay best friends.

Tip 2: Out yourself everywhere you go.

Out yourself, baby. We lesbians have unique hearing, and we're so tapped into our sexuality, we will most definitely notice if you say something about an ex-girlfriend.

We'll immediately think, "Ex-girlfriend? Did she just say EX-GIRLFRIEND? OH MY GOD, SHE'S ONE OF US, BECKY!"

As soon as you start outing yourself, all the other gays will start flying out of the woodwork.

The next thing you know, every lesbian on this side of the Atlantic will be friend-requesting you on Facebook. We love fresh meat, and we move quickly. So enjoy this time because you'll be old news soon enough, you cute, baby dyke!

Tip 3: You're not too good for meetup.com.

Too intimidated to go to the bar alone? Are you sober? Do you not like clubs? Listen, honey, you're definitely not to good for meetup.com.

It's not dorky; it's actually really amazing. They have meet-up groups for everything: queer books clubs, lesbian cinema lovers or lesbians for Christ. Anything you have ever dreamed of exists on meetup.com.

I once found a lesbian wine-lovers group. Granted, I was the youngest one there by about 25 years, but it still ruled. Not to mention, those ladies had some great connections, so you better believe I know an expert in every industry now.

Tip 4: Be a social networker.

When you're new to the scene, it's important to tap into your inner PR girl. You need to engage with, talk to and connect with every person you meet.

Every lesbian will undoubtedly lead you to another three lesbians. Take down names and numbers, talk to everyone and always follow up.

If you're shy like me, this can be hard, but as long as you're kind, ask the other lesbians questions about themselves (we all love to talk about ourselves) and smile, you're golden.

Tip 5: Cultivate relationships (aka text every gay you meet right away).

So now that you've become a social networker, you need to follow up with every person you meet. You're the new lez in a sea of seasoned dykes, so you have to be the one who makes the initial effort to hang out.

If you meet a lesbian anywhere, text her right away the next morning. She won't think you're trying to fuck her as long as you keep it friendly and nonsexual: "Hey, great meeting you! I was going to grab a drink after work. What are you up to?"

And if she does think you're trying to have sex with her, she'll probably realize you just want to be friends pretty quickly because lesbians are very astute.

And if you are trying to have sex with her, well, you're probably in luck, honey!

Tip 6: Join the soccer team, even if you suck.

I'm blown away by the power of a soccer team. My friend recently moved to NYC and joined the West Village Ladies Soccer Team, and within three weeks, she had a massive group of amazing friends.

She never even played soccer before and mainly just watches from the sidelines, but those soccer girls are very friendly.

Plus, they usually go out for drinks afterward, so you can socially lubricate with booze after the game.

Tip 7: Wear something that makes you visible to the community.

I'm not saying you should get "I'M A DYKE" tattooed on your forehead. (Though, I do totally support that, if that's what you want to do.)

However, I am saying you should get a subtle equality pin, patch or shirt. Gay people have a radar for the equality pin, and we'll zero in on it and take note. A little "pride" button works, too... and so does cutting off all your hair. Just saying.

Lesbians love to volunteer their time, so you will definitely meet quality, selfless lesbians and develop a bond that extends beyond the club while volunteering.

Try to get involved at the LGBTQ center, The Trevor Project, It Gets Better Project, Planned Parenthood, or the local cat rescue. Lesbians love cat rescues.

I know you're excited to be out of the dark, repressive closet, and now, you're surrounded by all of these hot lesbians. But the easiest way to be blacklisted from a clique is to hook-up with one of your new friend's exes or crushes.

In fact, don't hook up with anyone in the damn group, OK? Lesbians are like lions — they're protective over their kind (and by kind, I mean exes).

Lesbians are like lions — they're protective over their kind.

So keep it in your pants, babe. Message me if you need anything. After all, I'm your lesbian big sister who's here to give you all the lesbian tips you never even knew you needed.