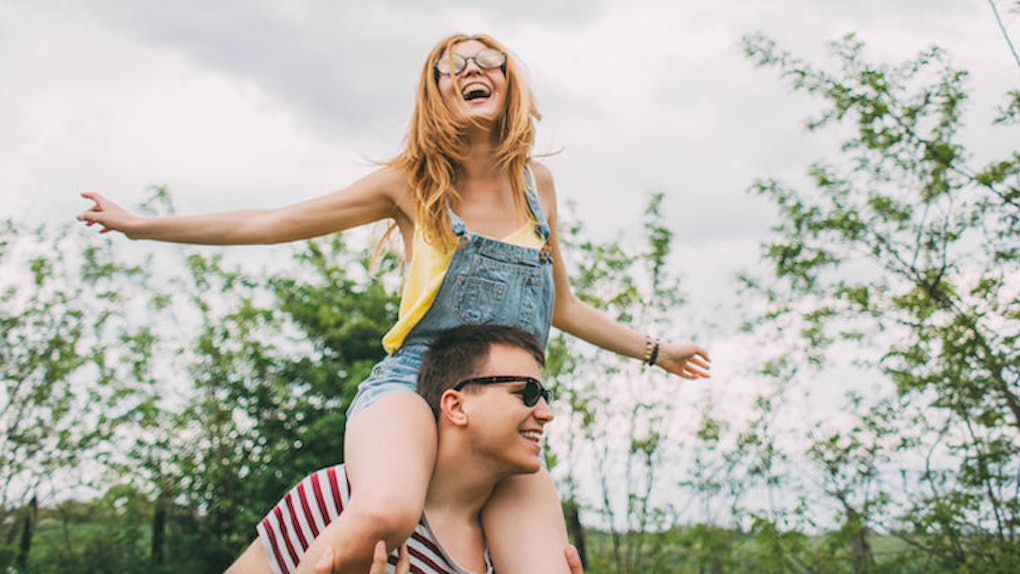 Three years ago, I was walking down a cherry blossom-lined sidewalk at sunset. Spring had crept up on the city in a way that seemed to indicate that something important was about to happen.

But on that particular day, I was in a rush; I’d signed up for a beginners' bartending class. I was going to become a bartender. Unemployment stung worse than a wasp’s sting: It made me feel subpar and subhuman, and getting a job was my only goal.

My walk turned into a run. I was determined not to be slowed down by lampposts that creeped onto sidewalks. And then, while waiting anxiously at cross the crosswalk, I saw him.

He stood at just over six feet tall, and he had blond hair and aquamarine-blue eyes. He'd apparently just stepped out of a menswear magazine. That was the moment I should’ve known he was too good to be true.

We briefly made eye contact, and he mouthed something I couldn’t hear through my ostentatious headphones. I took them off.

We walked six blocks together. There was an instant spark; I had never laughed so hard and so easily with someone in so little time.

I met him shortly after his father died suddenly from cancer, and it was a tragedy that taught him to laugh through life. But his pain was palpable; it translated through his touch.

He instantly became special to me, and he continued to stay special even after we called it off.

Your friends will tell you that it’s impossible to stay friends with someone who spent nights holding you close.

But what your friends won’t tell you is that completely dissolving a relationship can be as painful as limiting it.

I understood their rationale. When it was over, I cut him out of my life for a year. It was a year spent missing him.

Letting him go was the hardest decision I’ve ever made, but so was letting him back in. We’d been friends before, so why couldn’t we be friends again?

You tell yourself that being ‘just friends’ is enough.

I could be his friend! I could be the exception to the rule! We did 'friend' things: I casually invited him to the beach, where we platonically sunbathed. I wrote a song. He produced it.

But what was my plan if things changed? I didn’t have a plan. I knew I’d take it personally if he were to start dating someone else, and what if he did? Would I have to be friends with his girlfriend? Is that what being a 'friend' meant?

How many hits would I be willing to take in the name of being his friend?

You’re no longer a person; you’re just your lover’s friend.

Somewhere along the way, I resigned myself to a life of unhappiness. I’d be unhappy as his friend, and I’d be unhappy without him. The way I saw it, there were no other options.

No longer could I remember life before I had met him. My memory began and ended with him. My mind tricked me into thinking I wasn’t Sheena anymore; I was just a friend of the guy Sheena loved.

I got good at being ‘just a friend.' This was enough for me, and it always would be. It would have to be.

The disconnect flummoxed me. I didn’t understand why he could so skillfully play the role of 'friend' and not 'lover.'

Maybe he wanted to be my friend because it left him with nothing to lose -- and me with everything to lose.

You can’t move on -- but you continue to try.

Why is it that we always let what we don’t have blind us from what we should be grateful for?

It’s a tale as old as time: I’m blessed with a thriving social life, a wonderful job and good health. But I don’t have him.

Every person is just proof that I’m still trying to get over him, and every date is just a distraction from what he can’t give me.

Falling in love is not something we can control. But we do have control over choosing to stay. But to remain and be powerless -- to lack confidence -- is to admit defeat.

In order to move forward, we need confidence in ourselves and faith that things will see themselves through.

I spend nights wishing I could magically wake up one morning and possess the confidence I know I need to move on.

You must surround yourself with strong-minded and confident people. I do, and their words help my confidence a little more every day. I hear their words; if only I could actually feel them.

But one day I will. I’ll be ready to move on from being 'just friends.'

I write this and feel the weight of my words. But feelings are heavier than words.