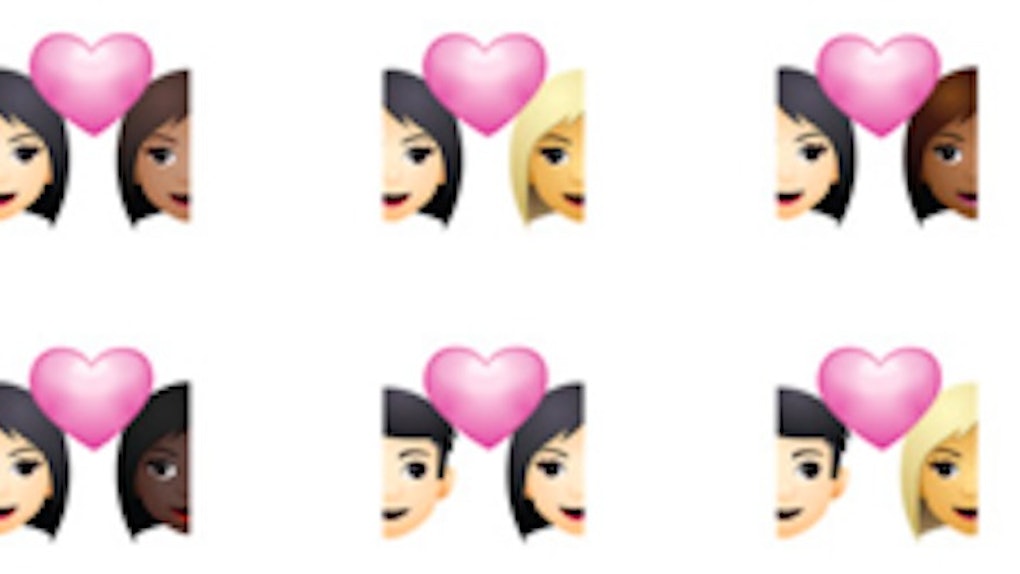 My fellow non-white people of the world who text, rejoice! There's a new app that includes interracial couples as emojis.

The app, called "Love-Moji," lets users share emojis of couples kissing, being separated by a pink heart (I know you all know that one.) and standing while holding hands.

Oh, and that's not all. There are even same-sex interracial options! The app seems to have almost every major ground covered.

Since the beginning of the emoji era, emojis have come a long way, in terms of both race and sexual orientation, such as new LGBTQ+ options, with cute stickers like rainbow flags.

They've also expanded from solely images of white people, to varying yellow, brown and black skin tones. (Now, every time I send a "thumbs up" to someone, I do it with a tan-colored thumb because I'm, you know, tan.)

That being said, the iPhone should really include these interracial couples as standard emojis. As of right now, the special Love-Moji keyboard is only available for free download in the iTunes App Store, as well as on VoteLoving.com.

The backstory for why the app was created is actually pretty cool. Love-Moji was initially made to promote a new movie called "Loving," a film about an interracial couple named Richard Loving, a white man, and Mildred Loving, a black woman.

The couple overturned a law that banned their marriage in Virginia in the 1960s, and they subsequently became figureheads for the Civil Rights Movement. Go, Richard and Mildred! (And thank you for the emoji inspiration.)

So go out and support interracial couples with your keyboard by downloading Love-Moji. Now, I just need to find a dude to call my own, so I can actually use the app properly.