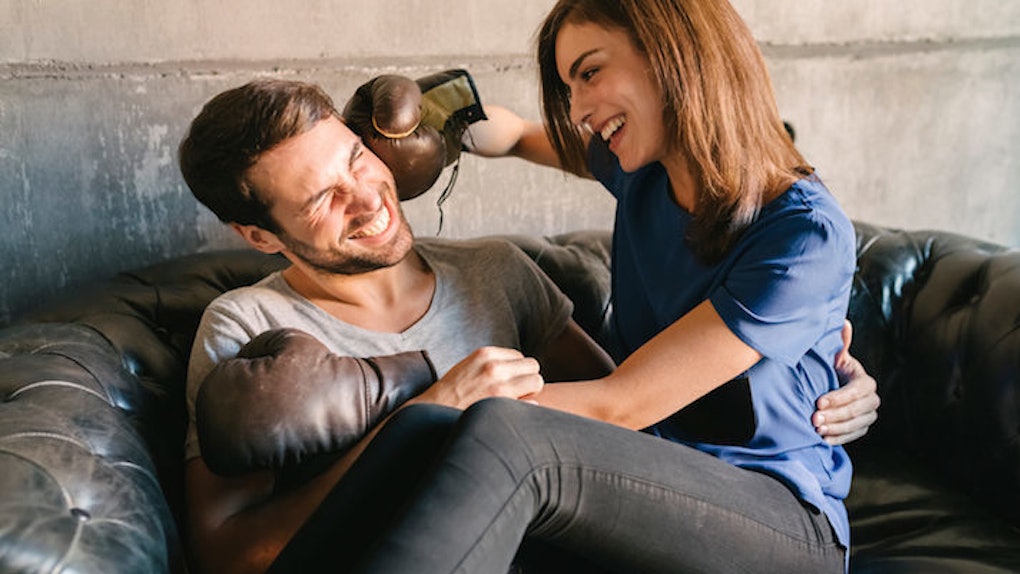 8 Immature Fights Couples Have When They're In Mature Relationships

Being in a mature, adult relationship doesn’t necessarily mean those who are a part of the relationship will act like mature adults.

When emotions are thrown into the mix, things are often said and done that are later regretted -- and could have been avoided.

In reality, there is never cause to fight. You should always discuss, try to understand and then come to a resolution.

Here are some immature fights you might see in a mature relationship:

This becomes an especially big factor when two people start living together -- who takes out the trash?

Whose turn it is to wash the dishes, dust, sweep, mop, finally clean the bathroom that seems to be growing mushrooms?

People have different levels of comfort when it comes to cleanliness and organization. Some are overly OCD while others could live in a pigsty and not care.

You could yell at each other for a few hours, but in the end, nothing will get resolved until you express what it is that’s bothering you. If you’re going to use your words, use your inside voice.

2. Fighting over not getting enough attention/needing too much attention.

I’ve dated needy women, and I’ve dating incredibly independent women -- they come in all shapes and sizes, as do men.

You have to strike a balance, as neither you nor your partner will be happy if you don’t get the attention and independence you need.

The only way to do this is to be mindful of what the both of you need in order to feel emotionally satisfied, and then make compromises when compromises need to be made.

Or you can just yell at each other and hope that your problems solve themselves.

3. Having heated arguments over theories, not facts.

Debates are one thing; heated arguments that turn hateful are another. Life has few certainties -- just about everything can be left up to interpretation.

I understand most people think holding similar, if not identical, beliefs is key to a successful relationship. I disagree.

This may usually be the case, but only because most people aren’t mature enough to accept their beliefs are theories, not facts.

Take religion, for example; the chances of there being some old, bearded dude sitting on a cloud, creating people out of clay to me is laughable; however, I can’t definitively prove otherwise.

You don’t have to agree with your partner, but you ought to respect him or her.

And if you can convince him or her otherwise, then great -- but that shouldn’t be your mission.

4. Fighting because your partner chose to hang out with friends instead of you.

Being in a relationship is difficult. Some will say we aren’t meant to be in monogamous relationships… I think that’s a silly notion.

Seeing the same person day in and day out will inevitably become a little mundane. It’s not his or her fault, and it isn’t yours either -- it’s just the nature of things.

If your boyfriend or girlfriend decides to spend a few nights with his or her friends, there’s no reason for you to get upset.

Even if he or she seems to be doing so more and more often.

Sometimes we just need a little extra space to fully appreciate what we have.

As long as your partner is there for you when you need him or her to be, there’s no reason to cause a fuss.

5. Fighting because your partner didn’t text or call you back in a timely manner.

Sh*t happens. People are busy. They don’t always check their phones in a regular manner.

Or if they do check their phone, see that text or missed call, and then still don’t get back to you, it doesn’t necessarily have anything to do with you.

Maybe your partner is focused on something else. Maybe he or she is dealing with something -- maybe even something he or she doesn’t particularly feel like sharing with you.

Or maybe your partner wants to take time to respond accordingly instead of blurting or texting something he or she will later regret.

If you really don’t trust your partner, then there are bigger issues you need to address.

I can understand why this would bother people, but it’s social media for f*ck’s sake.

If you’re worried because you don’t want him or her being attracted to other individuals, then you need a reality check.

People don’t stop being attracted to other people as soon as they become part of a relationship. All it proves is your partner has a healthy sex drive.

Just be sure it’s you he or she is sexing up and no one else.

7. Fighting over whose turn it is to change the kid’s diaper.

Emotions run high, and stress is certainly put on the relationship. Why would you want to add to it?

If you’re a parent, then accept your reality and do what needs to be done.

Yes, waking up in the middle of the night to change diapers, feed or rock your child back to sleep is nowhere near as appealing as sleeping is, but it comes with the territory.

You and your lover are in this together -- don’t take your frustration out on each other.

Don’t point fingers, and make sure to always do your part -- even picking up the slack from time to time to make it easier for the man or woman you love.

8. Fighting because your relationship isn’t perfect.

What in the world would make you think your relationship ought to be perfect?

You need to be very careful with your expectations and definition of love.

It makes it easier to define love as perfection, purity, this incredibly euphoric experience… but that’s an incorrect definition -- one that can ruin your relationship, ruin the love you share and potentially ruin your life.

Your love for each other will always be flawed. It’s these very flaws that make it so perfect.