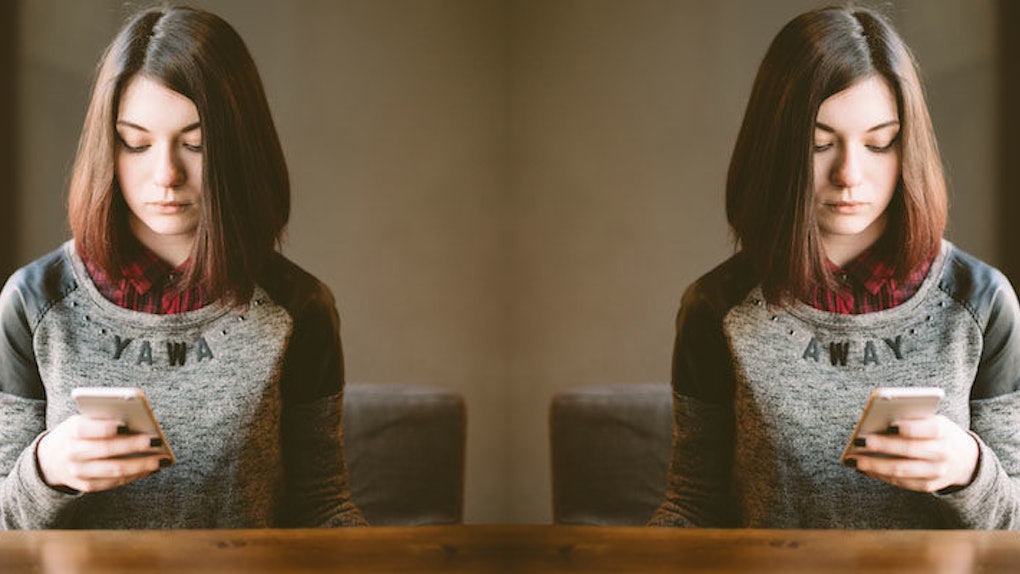 I'm Such A Social Person, So Why Do I Suck On Dating Apps? (Photos)

In a city like New York, though, it's infinitely easier than any other city to meet a man you might hit it off with. The landscape makes it possible to meet a new kind of person around each and every street corner.

But having that slew of options readily available can be stifling, too. Why settle on just one man when there's always someone bigger, better and shinier down the block? It's too fun to pick up men at bars because there are so many bars. And so many men.

The bar is my haven. It's where I'm good -- no, it's where I'm fabulous. It's where I'm inevitably fearless, unquestionably sexy and irrevocably confident. If I see someone I like, I make it my mission to march up to him and get his number. There's something about being in the presence of someone who exudes a contagious energy that makes me not want to miss out on that golden opportunity.

I am a social f*cking butterfly. Like, picture the most flamboyant butterfly you can think of. I am queen of the monarchs.

I've met the only two ex-boyfriends I've ever had at bars.

One ex was a customer who seated himself at my bar during my brief history as a bartender, and to whom I slyly slipped my phone number when he was just a tad too drunk. The other ex was standing in a dark corner of a different bar eye-f*cking me when he decided to walk up to me and comment on my hair accessories.

But alas, those relationships both turned out to be busts. So seeing as I'm currently single (very, very single) and have turned into a bit of a homebody as of late (I credit a carefully groomed cynicism and growing older for this recent transition), I've gone from bar-hopping back to dating apps, with high expectations for my prospects.

But what I've found has contradicted my expectations entirely: as sociable as I am, I absolutely suck on dating apps.

When you think about it, my bad dating app luck kind of makes sense. There are a lot of IRL factors missing in conversations with people on dating apps that are pretty damn significant in determining whether or not you hit it off.

For one thing, there's no chance to interpret body language, because there is none. Tone and inflection is lost in text conversations. When a dude stops responding, I end up taking it personally because I have no information about how to deal with his disappearance.

Like, come on. It's very rare that I actually see myself meeting up with someone, and Bill was one of those people. He had spunk. But then he ghosted me. F*cker.

Now, don't get me wrong. I've ghosted men quite a few times in my day, so it's only natural to be ghosted a few times, too. But when you ghost me after engaging in some witty-as-f*ck banter with me, and we were THIS close to meeting up IRL, why dip out and make me feel like the crazy girl I'm not?

Seriously, what happened here, Bill? Did you die? Did you magically find a new girlfriend in two days? Did you leave your phone in the back of a cab and forget to download the “find my iPhone?” app?

Yeah, I'm going to go with all of those because clearly the reason is not that I'm just not good enough for your Jersey ass.

Sometimes, conversations that were actually good just randomly die. Not via ghosting -- just with a dead end. Check out this one with Jeffrey.

Look, Jeff, I know you live in Connecticut and everything, so you aren't as cool as a New Yorker, but we were having a perfectly nice conversation about baking cookies. You were cute, too -- so why did a conversation that held so much potential turn into a dead-end? Did you really have to succumb to defeat by feeding me a half-assed, one-word answer?

And speaking of New York, I have a tendency to censor all my glorified New York sarcasm for the sake of sustaining a “normal” conversation (I'm defining "normal" here as the vanilla, mentally unchallenging back-and-forth in which a guy asks you what you do, where you're from and what your favorite f*cking color is).

Check out this conversation with Nick. I was practically yawning through it.

"How's your day going?" ranks up there with "hey, what's up?" as one of the most boring questions you can possibly start a conversation off with.

Like, do you really want to know how my day is going? What do you expect me to say to that? I could be brutally honest with you and tell you I cried three times already before talking to you because I'm what my therapist calls "hypersensitive." But ah, that'd scare you away, Nicholas.

More than that, though, I don't want to know about how your apartment search is a pain in the ass; apartment searches are always a pain. I'd much rather you tell me something interesting about yourself.

At least you listened to me, though. Ben over here didn't.

Seriously, Ben? Acknowledge my cute joke, you moron. Something tells me your bedroom personality is the jackrabbit f*cker.

Still, as disappointing as Ben was in all his ignorance, at least he engaged with me somewhat. Luke over here gave me nothing to work with.

I imagine if I asked Luke that question at a bar, the conversation wouldn't go that way. And if it did, you can bet your ass I'd walk the f*ck away.

I've also been ghosted more times than I can count because of what I do for a living. It turns out, though my career may fulfill me in many ways, it pretty much only hinders my love life.

Like, if you were a guy, and you read “Features Writer” in some girl's dating app bio, would you want to date her, keeping in mind the possibility that she'll expose all your dirtiest secrets to the world? Yeah, didn't think so.

I'd show you a conversation in which this happened, but I deleted all of them in a fit of rage.

So what can we conclude from my awesome luck IRL, but horrible luck over the phone?

Not to sound like a tired, man-hating feminist, but men, I'm going to have to place the blame for my inability to slay the dating app game on you. You suck at keeping a woman engaged on this godforsaken, technological road to hell -- er, I mean, romance.

Give me a call when you're ready to have a stimulating conversation. Until then, I will absolutely not be kissing you through the phone.