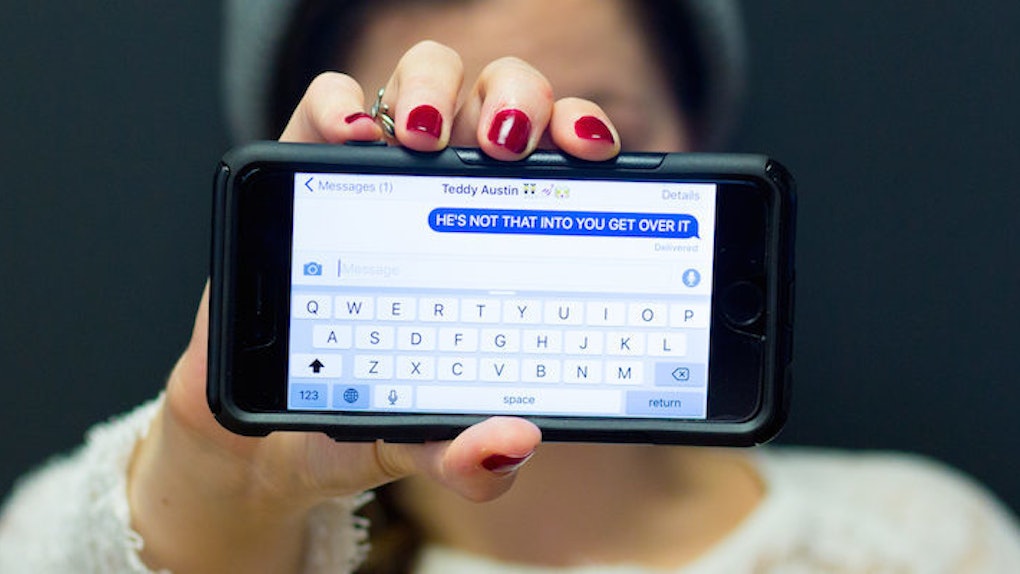 There Is No Gray Area: He Is Either Obsessed With You Or He DGAF

You know that guy you want to date, the one who is sending mixed signals? He's all over you one second, not calling you the next, isn't putting labels on your relationship and keeps making excuses to keep you around?

Yeah, he's not that into you.

I mean, yes, OK, he kind of is a little bit. He probably thinks you're hot and entertaining to some degree. He wants to keep you around. He doesn't like the idea of you moving on. How will he call you up for pussy if you go off and find a boyfriend? But he certainly doesn't want you to be his girlfriend.

If he makes you wonder, "Is he playing games? Is he interested? I don't know what he wants!" then he doesn't want you. He doesn't. HE DOES NOT.

ATTENTION, LADIES: THIS GUY IS A F*CKBOY. STOP MAKING YOURSELF LOOK LIKE A DESPERATE LOSER.

This sucks to hear. It blows. I know that. There have been plenty of times in my sordid past when I have convinced myself that a guy is going to come around, stop treating me like second-class garbage and be a good boyfriend.

In college, I stuck around waiting for my hook-up buddy to wake up and want to be with me, and then I waited for the next guy to want to be my boyfriend even though he just called me for sex. I spent hours and weeks and copious amounts of energy pouring over past conversations and text messages trying to figure out what he wanted. I thought, If I just stick it out, these guys will figure out how great I am.

Unfortunately, this doesn't happen. And it has NOTHING to do with how great you are. Which is awesome and f*cking blows all at once, you know?

Most (not all, but most) guys are perfectly capable of being decent to a woman; they just want to call the shots. It sucks, but c'est la vie. If he's not knocking down the door, stop wasting your time. There is no gray area. Everything is black and white. If he's into you, he will see you. If he wants to make it happen, he will make it happen.

It pains me to write this, but if I don't, who will? This is my social responsibility.

Look, it's hard to believe there are real, decent lovely men out there who want to BE with you without making you feel like sh*t about yourself. But there are. You just have to stop putting up with this BULLSH*T in the meantime. I didn't meet a good guy who loved me until I decided that was the only thing I would take.

Men don't have to play games when it comes to dating. We'll date them no matter how they act, even when they act like douchebags.

They don't sit around plotting every move, every text and everything they say the way we do. They just say it like it is. And if they don't do that, it's because they don't even think you're worth dealing with. They don't even give enough of a f*ck just to be like, "Hey girl, not really interested. Bye."

Yes. You read that right. There are NO MIND GAMES WITH MEN.

What you may perceive as some kind of game, some variety of mixed signals, is not what you think it is. Those confusing signals are actually the CLEAREST signal of all: he's not that into you. He doesn't care. He doesn't. He does not.

Once you get to a certain age, you start to understand that you need to want more for yourself. You want to date your best friend. You want to date a guy who makes you laugh, who you can do silly, ridiculous gross sh*t with and never be self-conscious or insecure.

Wanting more for yourself is the only way to GET more for yourself. So don't settle for something so beneath you. No matter how much you want him to be that guy, he isn't that guy. Move on.

Be with someone who doesn't make you feel like you're unworthy, neglected or pathetic. There are guys out there who will treat you like the princess you are, but this is not that guy.

No matter how much you want him to change, no matter how CLOSE you think he is to being perfect, he isn't. He isn't for you.

Stop making excuses. He isn't worth the tears, the sadness and the uncertainty.

If he's not obsessed with you, he isn't worth your time. If he doesn't make you feel like you are perfect, fantastic, fabulous, sexy and gorgeous no matter what you do or say, HE SUCKS. Ya dig?