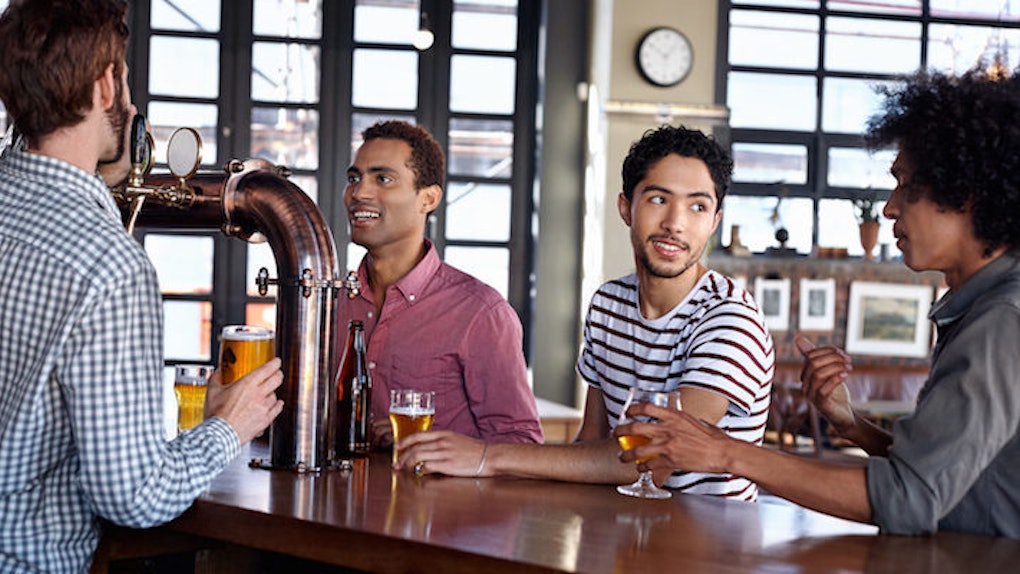 Three years ago, my group of friends were 80 percent single. We were that immature group of regulars you'd see at the popular bars downtown who knew each of the bartenders by name. Awful, I know.

Nearing our mid-20s, we'd spend our weekends getting absolutely smashed and, when lucky enough, we'd get laid. We were in no way looking for anything serious and were just fine repeating this same structure every weekend.

But then two of our buddies got married. We'd lost them to the inevitable lure of love. Unbeknownst to us, these two unions would soon change everything. After we attended these weddings as prestigious members of both wedding parties (which were less than a month apart), our collective immaturity miraculously fled us. Each of us suddenly wanted something serious, something more meaningful.

Just one year after these weddings, every single one of my friends were in a serious relationship. Witnessing two of our closest friends fall in love affected us. We suddenly wanted what they had, and we pursued that. We pursued it relentlessly.

My point is that all guys are immature at some point in our lives, we just don't know that we are. We aren't intentionally being assholes, we just have no clue what we want. Every man has that revolutionary moment when he realizes he wants something more, but the problem is that you, the person who has to spend an evening with the dude, don't know if he's still in his fantastical Peter Pan days or if he's experienced this aforementioned revelation and has decided to grow up.

To assist in determining this trait, I'm going to provide some characteristics of this immature brand of male you can spot from as early as the first date.

A “hangout” is non-committal, whereas a “date” places unwanted pressure and expectations on the evening. Since guys are renowned for our fear of commitment, we tend to favor the hangout because it's casual.

If a guy you're speaking to asks to hang out and speaks to the outing as more of a no-strings occasion, there's a good chance he's not looking to commit. He's looking for something physical.

When a man indulges in a few too many beverages on a date, he's compensating for something: a shitty personality, insecurity, nerves, whatever. By drinking too much, he appears more confident. Conversation will flow more smoothly, and he'll ultimately put his most charming self forward, winning you over. You know, liquid courage.

He could be drinking a tad too much because he likes you a lot and he's shy. But don't discount the likelihood that he's not taking things with you very seriously and doesn't care what you think of him getting drunk. If you're cool with this, go for it. But expect late-night booty calls after he's failed elsewhere.

Does he have a job that pays incredibly well? Have people told him he looks just like Channing Tatum? Is any of this true? Who knows, but he sure as hell wants you to believe they're true.

Guys tend to use bragging as a means of building themselves up. It's a defense mechanism we latch onto when feeling insecure. It's an, “If we don't speak well of ourselves, who will?” kind of thing.

4. He speaks ill of others.

This also is a sign of insecurity. For some reason, insecure dudes mock others as a means of making themselves feel/look better in comparison. It's a bully mentality that could also be an attempt to keep conversation going, to keep that dreaded first date silence at bay.

Since an immature man isn't looking for anything serious, he's going to want to have sex as soon as possible. After he's done that, he'll be onto his next conquest.

An immature dude thinks that by taking you out to dinner, you should repay their monetary contribution with sex. But you are no prostitute; let him know this by slamming the door in his face. Or give him a swift kick in the balls. Totally up to you.

The more you like somebody, the more you try to impress them. This stuff isn't rocket science. Since it really doesn't take much for guys to get ready, there's no excuse.

Examples are: He doesn't do his hair, he opts for a hat, he hasn't groomed his facial hair, he's wearing athletic gear (track pants, basketball shorts, etc.), his clothes are wrinkled, etc. You know where I'm going with this. If you put in the effort to look good on your evening out, you should most definitely expect him to do the same. It's a sign he's investing in the potential of your relationship.

He's not over her, especially if there's an ill will peppered into his remarks.

8. His life seems too spectacular to be real.

You're in heaps of debt from university and he's travelled the world, met Beyoncé and his stories all seem a tad more interesting than yours. While there are certainly a couple of people who live genuinely interesting lives, it's unlikely that your Millennial date who also went to school, is in just as much debt as you are and works part-time at Forever 21 has actually done all of these fantastic things.

He's probably lying. He's a one-upper, and I can guarantee you he's never even met Solange, let alone Beyoncé. He's a pathological liar that's trying hard to impress you by making his life seem more interesting.

9. He pushes the second date too early.

You've just sat down for coffee and started chatting about your careers, and next thing you know, he's got this great place downtown he'd like to take you to ... tomorrow. Sorry to break it to you, but this guy's desperate. By the second date, he'll talk children and have already shopped for a ring.

He's super charming and says all of the trademark things you want to hear. Narcissistic people (read: players) are incredible at the art of being wildly charming; they're almost professionals.

Does he agree with everything you say? Do his interests mirror yours? This could be his attempt to build a connection that simply doesn't exist. It's disingenuous. He's trying to be somebody he's not, and is desperately trying to win you over with a facade.

If you just met this guy and he's late to pick you up or meet at your destination, he could be genuinely running late, or he couldn't give a shit about the date. If he's running late on the first date, it'll only get worse the more comfortable you two get with each other.

His flakiness isn't only limited to in-person discretions, either. If he's tardy when texting, this could mean more of the same. Well, at least it did with me.