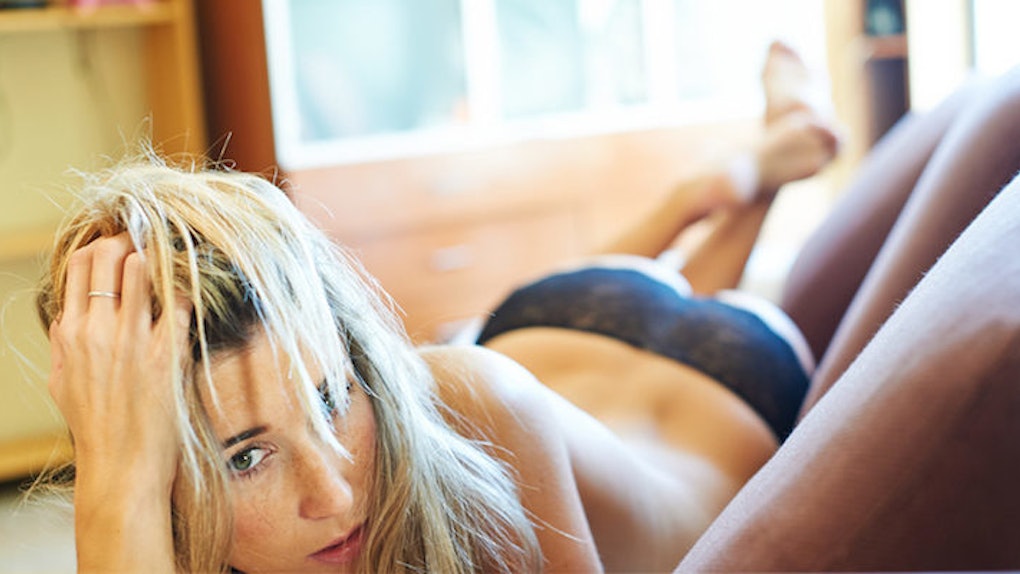 You're Not The Only One In A Rut: How Much Sex Is Gen-Y Actually Having?

We're a generation of dating apps, casual sex and hard-hitting sexual empowerment. We're all about getting pleasure and leaving out drama. We're all about forgetting the stigma of one-night stands. We act on our desires.

But despite this apparent and radical priority shift, we all claim to be looking for love. We're a generation that's also rife with contradiction. Is it sex, or is it love? Is it both?

When we couple up, do we keep f*cking like gorillas, or do the numbers about how much sex couples have (three to four times a week -- more than I'm having, if we're being honest) still hold?

With all of the information out there -- with all of the Tindering, coupling, sexual escapades, pressures and lack of boundaries -- I can't help but wonder:

How much sex is the average millennial couple ACTUALLY having?

In a recent article by Daniel Paquette of The Washington Post, Paquette referenced a survey of 33,000 American adults. According to the findings, millennials are having less sex than generations before them.

We claim to be so out in the open with our sexual habits, and yet we're having less sex. WHAT IS GOING ON?!

To get to the bottom of all of this mystery, Elite Daily surveyed over 150 20-somethings to figure out WTF is happening behind closed doors.

No more water-cooler gossip and exaggerated BS. Let's find out just how f*cking much the average 20-something Millennial couple is actually f*cking. What the survey found were some very interesting, eye-opening insights into the 20-something couple and its mysterious sex habits.

Despite what you may think, Gen-Y didn't kill relationships.

Even with the plethora of "swipe rights," dating horror stories and an encompassing feeling of sexual liberation, 72 percent of the people Elite Daily asked responded are currently in a relationship. Only 9 percent of 20-somethings are not romantically involved in any way.

With that being said, the prevalence of the hookup culture is certainly widely felt, with 14 percent of millennials saying that they were “hooking up” with someone.

Don't do away with the old stats just yet, boys and girls. Of those surveyed, 25.5 percent of couples have sex one to two times per week, while 44.7 percent have sex three to four times per week. That old “three times a week” idea seems to ring true -- even for millennials.

But ... Gigi! What about all the single people who are supposed to be humping like little bunnies?

Sorry to break it to you, folks, but only 10 percent of responders have sex every day. See, you're not the only person not getting the P or V on a daily basis, so stop feeling like a loser.

Here's another shocker and something that was very surprising to me. Eleven percent of millennials are having sex only one or two times a month. Eight percent aren't having it at all. That means that 12 people out of every 150 are not getting it AT ALL. How about them apples?

We all know who's f*cking, but who's getting off?

Getting laid is half the battle. The real question is, how many orgasms are people having?

This goes to show that millennials are in fact having satisfying sex. These findings are particularly heartening, especially considering that one in three women have trouble achieving orgasm. All that sexploration we're doing is paying off!

Everyone is thinking about it.

You're not alone in those fantasies about that hot instructor at the gym or that gorgeous heartthrob from your favorite murder mystery show. We're all in the same boat.

Sexual fantasies are alive and well in millennial life. A whopping 90 percent of survey participants said that they fantasize regularly, and 53 percent said they indulged in a sexual fantasy every single day.

So, the next time you wonder if you're a pervert for thinking about all the sexy things you want to do to your work crush while you're both standing at the copy machine, just remember that you're not the only one with sex on the brain.