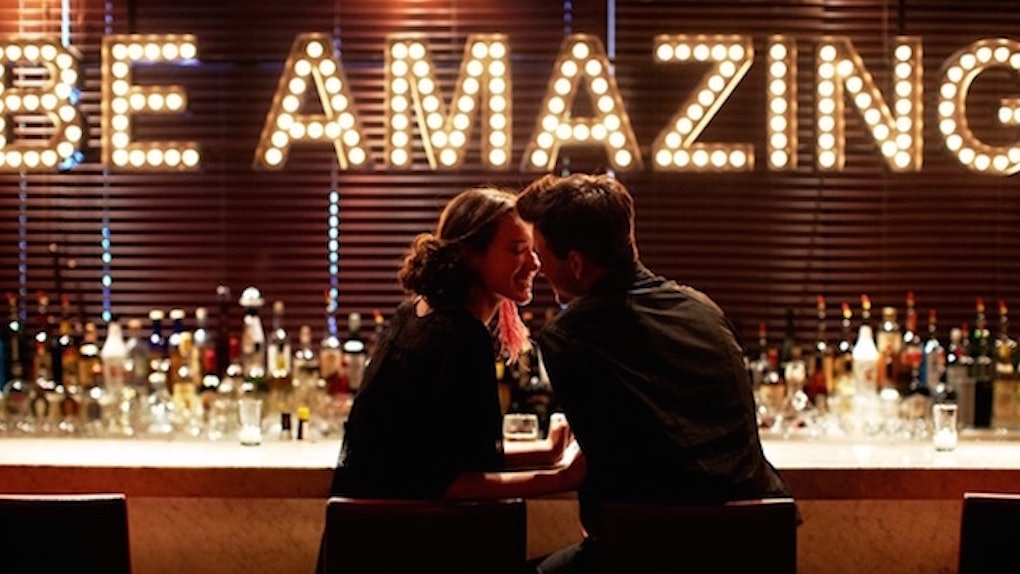 I don’t live under a rock. I know it’s the 21st century, and I know it’s okay for me to go ahead and make the first move.

If I spot a hottie across the bar, I know it’s not his responsibility to walk up to me and get this party started. The idea can be mine.

I know all of this. But what I don’t know is how in the world I’m supposed to go about making this elusive “first move.”

Whenever I consider doing this, my mind is flooded with cringeworthy memories of every random creep who's tried to buy me a drink or start painfully awkward small talk.

I REFUSE to be the random creep of anybody’s night (let alone this super hot guy who could be the potential father of my future children)!

But there's a problem. If I don't sack up and make a move, the odds are that I will never speak to this guy again (let alone have him father my future children).

So I went ahead and asked some great first-move-worthy guys (I promise you I have good taste) how they would like to be approached at bars. Turns out that there are plenty of ways not to come across as a random creep.

“Look at him until he makes eye contact with you, then suddenly look down and smile… instant boner.” — Steve, 21

“Once I had a girl talk to me from across the bar. Like we both were at the bar sitting down and we made eye contact and she mouthed ‘hi’ and then I said, ‘Hi, I miss you,’ and she gave me the finger to come over. That was kinda hot.” — Justin, 24

“With her credit card asking me what I would like to drink. It’s appealing because I like to drink, and who doesn't like a free drink?” — Ed, 24

"Confidence is attractive, and a girl who puts herself out there is going to spark interest. It's as easy as going up to a guy and handing him a drink and saying hi. I guarantee he will do the rest." -- Jake, 21

Walk up and start conversation.

“I’d always rather talk to someone who is excited to see me. So if a girl came up to me, I would be happy to hang out with her.” — Anthony, 21

“I would want her to spot me from across the room and make her way over to me super confidently. There's something special about a girl who knows what she wants.” — Connor, 22

"Honestly, anything short of a girl coming in guns hot and grabbing my cock would be fine by me. Haha, but seriously, just comin' up and sayin' 'hi' is all it takes. Some girls can be intimidating, so mixing in a couple first moves makes them seem much more approachable and friendly." -- Mitch, 21

“Just the other day a girl tapped me on the shoulder while we were both in line for drinks. She said 'hi' and we just started talking from there and hit it off. Literally, all you have to do is come up and introduce yourself, and it works. Every time. No guy is gonna deny at least a conversation!” — Max, 21

Give him your number.

“I was hanging by the bar at a country concert with my friend Ryan, and I had actually just said to him, ‘I’m gonna meet my wife tonight.’ Next thing I know, Kristen [my now-girlfriend] dropped a napkin on my lap with her number on it and said, ‘you dropped this.’ Being the funny guy I am, I texted her like 20 minutes later saying, ‘I didn’t drop anything but thanks for lookin’ out.’ The rest is history.” — Andrew, 25

“I think a lot of the time both guys and girls get kind of intimidated by the thought of the girl making the first move just because it’s so rare. Having the girl asking the questions and being really casual would make the conversation less intense and the light tone would make her easier to just be around. For example, you could talk about anything that’s going on within the bar so you guys can relate to something right off the bat. Otherwise it may get like unorthodox, and a lot of guys can get emasculated easily, so it would be a nice way to keep it casual and un-intimidating.” — James, 23

“If she came over to me while I was at the bar and struck up conversation while she was ordering her own drink, it wouldn't seem overly eager. Working in some jokes but not forcing them would be a plus, and I would hope that maybe her friends were with her so it's not just like she's coming at me to just get in my pants but actually wants to have a conversation.” — Will, 23

“I’ve noticed the most comfortable bar conversations start with a compliment or an observation about something the other person is saying or doing.” — Anthony, 21

“I don’t really care how she goes about starting the conversation as long as she’s fun to talk to. For example, I like a girl who’s either complimenting me or who has a good sense of humor and can tell jokes.” — Michael, 21

Don't be afraid to be aggressive.

“I guess I would say for girls to just go for it and not be afraid of getting turned down. That's basically what happens to guys majority of the time. Also, if girls are aggressive I'm more likely to be interested. One time this summer someone came up to me and said, 'Why haven't you asked for my number yet?’ out of the blue. Kinda cheesy, but I was intrigued.” — Nicholas, 21

“I was at a bar watching a hockey game with a couple friends. During the game, a girl approached me and said how she liked my jersey. Simple. Harmless compliment. She took the initiative to carry on a light-hearted conversation The night progressed and she said, ‘I’m going to be honest with you and let you know how cute I think you are. You're not going to get laid tonight, but you should get to know me.’ We ended up dating. So, here’s the scoop … Guys enjoy honesty.” —Ryan, 25