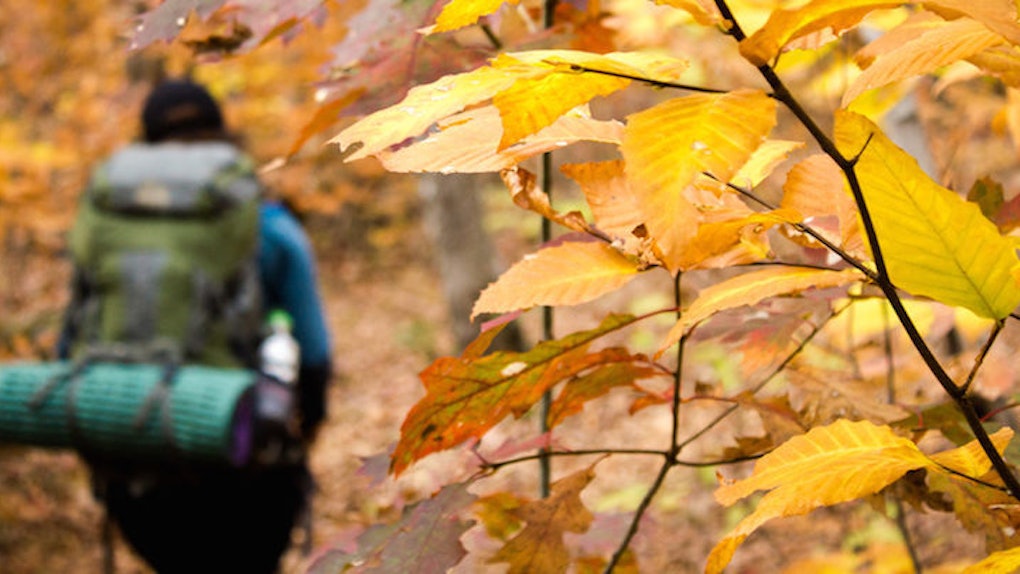 The Appalachian Trail (or, as I prefer to call it, the “trail of anxiety”) is a 2,189-mile trail that stretches across 14 states, from Mt. Katahdin in Maine to Springer Mountain in Georgia.

Every year, thousands of people attempt to hike the entire trail in one long trip, dubbing them “thru-hikers.” Only one in four of these maniacs actually completes the trek, making it a fairly uncommon accomplishment.

So, when my boyfriend informed me he was taking on such a drastic undertaking, all I could muster up was intense nervousness and sheer confusion. There I was, living in a tiny studio apartment with a cat named Stuart, and my boyfriend was about to take off on a dangerous journey down the East Coast.

I couldn’t even come close to fathoming the idea of hiking 20-plus miles every single day, with limited access to food, water and shelter. (Not to mention, there was the impossible task of maintaining decent personal hygiene.)

Sleeping in the dirt? LOL. Rattlesnakes? I'd rather die. Lack of showers? Gross.

He had lost his goddamn mind. There was no way he could be serious, right?

Not only did he complete the entirety of the Appalachian Trail, but he finished in just three and a half months. (Do the math, people. It’s insane.)

Initially, I figured I’d be just fine, since I was pretty used to his job as a contractor, which took him overseas quite a bit. However, there was something about that damn trail that proved to be a strain on both of us.

It was the ultimate test on our relationship, with each day more unpredictable than the last.

The silver lining? It was a learning experience for us, and it really changed my outlook on our relationship for the better. In fact, dating a thru-hiker has made me realize a few things about relationships in general.

1. If you're not happy supporting each other's dreams, you'll never be happy together.

I’ll be honest: I was sort of hoping the whole “hike the trail” idea was just that: an idea. In theory, it sounded pretty cool, but in real life? No way.

Fast-forward to a few months later, and I’m on the couch, eyes swollen from crying, grasping a balled-up tissue and wondering what the hell is going on.

Really think about it: What would you do if your partner set out to conquer a seemingly impossible goal? Would you stick it out? Would you run?

When the time comes, and your SO decides to chase that crazy dream, it’s up to you to decide how supportive you'll be, regardless of how much you dread the idea.

If you find yourself completely miserable when trying to be happy for your SO, odds are, your feelings will snowball into a giant pile of resentment.

You can only fake being excited for so long, until your partner realizes every “supportive” statement you make is complete bullsh*t.

At the end of the day, your partner's happiness should genuinely make you happy, even if that happiness comes from hiking 30 miles a day without showering.

2. Unconventional romance is over looked too often.

Ladies, let’s be honest with ourselves: We usually have very specific expectations in mind about what romance is "supposed" to look and feel like.

What we should remember instead is there isn’t just one definition of romance.

When my boyfriend hiked his way into Virginia, I was finally able to go see him. He took an entire day off to spend it with me, which was the only time during his hike he voluntarily took a break. At the time, it meant to the world to me, after being apart for over two months.

Ultimately, I realized all those "expected" romantic gestures prior to the trail were completely trivial. Who cares about flowers and cards when I can have my dirty, malnourished hiker to myself for the whole day?

My point is to give credit where credit is due. Mistaking movie romance for real life will lead you down a long road to disappointment.

Everyone views romance differently. What’s important is showing you truly care. That’s all that matters, right?

3. How you deal with the unexpected will make or break your relationship.

Allow me to state some completely obvious knowledge: Nothing ever goes as planned.

If you’re a rational human being, you totally get that, and you know how to deal with it. But not everyone else does.

When sh*t hits the fan, it's important to pay attention to how you and your SO conquer the challenge together. Things aren’t always easy, and if the hard times make you want to strangle each other, it's a good indicator your future together is pretty nonexistent.

When my boyfriend was injured during week one of his hike (yes, week one), we were faced with a huge dilemma.

Does he come home? Does he tough it out?

The hike could’ve been over right then and there, and it would've saved me months of sleepless nights and way too many bourbon shots.

Unfortunately, we’re grown ups, which comes with the exhausting requirement of acting like grown ups. I supported and encouraged the remainder of his hike, not only because it was important to him, but because throwing an irrational hissy fit solves pretty much nothing.

Take any uninvited challenge, and turn it into a chance for the two of you to grow stronger as a couple. You'll regret it if you don't try.

4. If you truly love someone, drastic changes won't matter.

On a normal day, my boyfriend probably weighs 160 pounds soaking wet. When I saw him on the trail, however, he was virtually unrecognizable.

He'd lost over 35 pounds, had a long, mangled beard, sunken cheeks and walked with a slow, unbalanced shuffle.

It was shocking. He was essentially a zombie.

But here’s the deal: If you seriously love someone, the emotional aspect of the relationship far outweighs the physical.

The f*cked up thing is that people often "joke" about leaving their partners if they “let themselves go” physically. But what if, in some way, your partner drastically changed his or her appearance?

If you answered yes, long-term relationships probably aren't your thing.

5. Arguing over dumb sh*t is the quickest way to break up.

The reason "pick your battles" is a popular saying is because you seriously need to pick your damn battles.

Couples are going to argue, and it's a totally normal (and healthy) part of a relationship. Where it becomes an issue, however, is when you spend two days ignoring each other because your SO ate the last piece of cheesecake in the fridge.

Don't get me wrong; it's tough to pick those battles sometimes, and I learned that the hard way.

Before my boyfriend left for the trail, I had written him about 150 mini Post-It notes, put them in a Ziploc bag and gave them to him as a "going away gift." That way, he could read a little message from me each day. (So many girlfriend points for that.)

About two weeks into his hike, he informed me he "totally read them all," but then he "used them to start a fire."

No, you read that correctly. He set my love notes on f*cking fire.

Sure, he needed to shed weight from his backpack, whatever. But it was at that point, I realized it was going to be a really long few months if I freaked out every single time he pissed me off.

The same goes for any relationship. Every now and then, it's best to just let it go. You may be spiraling into an uncontrollable rage on the inside, but saving the big arguments for big issues will save your relationship from going down in flames.

What I've learned from all this is the more you trust someone, the more patient you'll be.

The trust I have in my boyfriend is why I remained so patient during his hike. Similarly, his trust that I would wait fueled his patience with me.

This was great because he needed a ton of it on the days he sat there, eating a can of tuna fish, while listening to me complain about the steak I ate for dinner (or how sore I was from running that 11-minute mile).

Separately, trust and patience are incredibly important attributes to any relationship. Typically, trust is the hero, while patience serves as the trusty side-kick. In reality, the two are equally necessary in building a strong foundation for a relationship.

Seriously, be patient. It pays off.

7. If you feel like quitting, even for a second, it's not worth it.

If you sit at home, thinking about all the potential ways your boyfriend could die on an Appalachian Trail hike, you’ll go batsh*t crazy. And it’s not cute.

Nevertheless, there wasn't a single second when I felt like giving up.

To be real, there should never be any doubt in your mind you’d be willing to give everything you have for the person you love. If not, what’s the point of being in a relationship?

More often than not, couples will drag out their relationships long past their expiration dates, and they inevitably end up in a total mess.

It's necessary and smart to end it before it turns into a giant gallon of spoiled milk. No one wants to be around your soured relationship, not even you.

If the two of you are faced with a life-altering situation, ask yourself, is this worth it?

Generally, you won't have to search too hard to find the answer.

When all is said and done, all of the bullsh*t life throws your way will pale in comparison to the love you feel for the right person.

Whether it's a three-and-a-half-month hike or any other unusual circumstance, the experience should bring you closer together, not tear you apart.