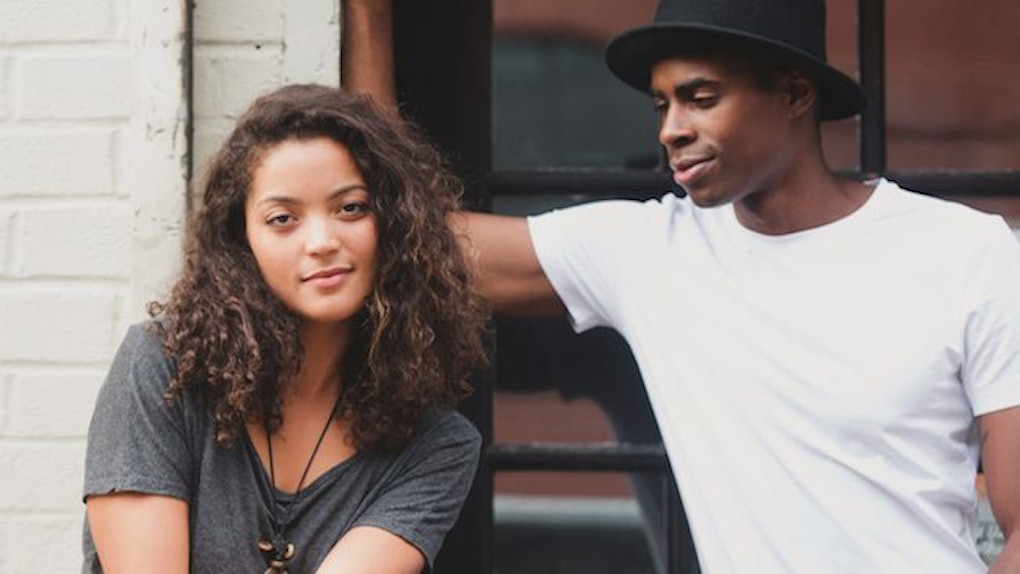 If there's one thing so many people our age have in common, it's the crippling, all-encompassing, heart-stopping fear of GETTING TOO SERIOUS WITH SOMEONE.

The unfortunate byproduct of this is that a very simple, very innocuous "Hey, do you want to hang out this week?" can be interpreted as "Hey, do you want to get married, move to Connecticut and only have sex when I'm ovulating so I increase my chances of bearing the 2.5 children we will inevitably have? Oh, did I mention this needs to start happening right now because my biological clock is ticking???"

Too many women have been in that awkward position of dating or hooking up with a guy who thinks we're in love with him just because we ask if he wants to get drinks on a Friday night.

Seriously bro, in what world does asking you to hang out mean we're now wistfully doodling your name in purple ink all over our notebooks and building an extensively detailed Pinterest board of our summer wedding with you in Rhode Island? None. So chill.

Here, 11 women share stories of a time when a man panicked because she did something that made him think she was trying to lock him down for the rest of his life, effective immediately.

She asked if he wanted to Netflix and chill.

Asked if he wanted a ride to work because his car was busted up, and he had no transportation. Also because I asked if he wanted me to come over one night to Netflix and chill. Clearly, I was looking to get too serious and was summarily ghosted.

She told him he could come with her friends to a dive bar.

I once told a dude I'd met a couple weeks earlier that I was going to the Lansdowne [a dive bar] that night with some friends, and he should come along if he felt up to it. His reply: 'Uhhh, not to be shitty, but I'm really not looking to date.' Yeah, because my idea of a romantic first date is live-band karaoke with a dozen of my closest friends at a dive bar in Fenway...

She wanted to cuddle.

Not something I said but, like, sometimes I think guys get weird about cuddling after sex. Like, I don't want to get married because a warm body feels good, OK?

She asked if he was going to take her number after sex.

After I had sex with this guy, he got dressed but didn't leave for, like, 10 minutes, so I asked if he was gonna take my number. Then, he was like, 'I can't do this. I'm not looking for anything.'

She told him they should go see a show when he visits.

I said to a (super casual) ex-hookup who was going to be visiting NY in a few months, 'There are some good shows here when you're in town. We should catch one if you have time!' 'Uhh, I think we should be keeping things platonic.' (He never spoke to me again AND never visited NY.)

She literally said nothing.

I was having a casual 'hey, what's up, nothing much' conversation with an acquaintance I had hooked up with once in the past. Then, out of NOWHERE, he apologized for not texting me ever because he's 'afraid of getting too close to anyone.' What makes you think I'm so in love with you that I'm just waiting for you to text me?

She referred to him as "my Michael."

She asked a guy to tag along on a work trip.

During the time I was seeing someone, I got a job interview in Los Angeles and asked if they wanted to tag along for the weekend. They said yes, and I even bought the plane ticket. Then, a week before the trip, they said they didn't want to go because that was 'too serious' for them. Who turns down a free trip to L.A.?

She wanted to make a plan "early."

I tried to make plans more than two days in advance.

She asked if he was feeling all right.

One time, after he left my house, I texted a guy I was seeing VERY casually to see if he was feeling all right because he had been acting weird. He called me freaking out and kept telling me to calm down, even though I wasn't saying anything, and rambled on about how we should focus on our futures, and if we get attached we'll only get hurt. And I had just been worried that he was being weird because I was being too cold/distant. We had hooked up maybe a handful of times and didn't talk much outside of that. And after this, I made it clear that I was only looking for sex.

She called him out on being late to a date.

The first guy I dated in college was four to five hours late for a date because he was playing 'Halo' with his roommate, and when I called him out on it, he said, 'Whoa, we were getting too serious.'

Moral of the story? We're not as obsessed with you as you think we are. Sorry.