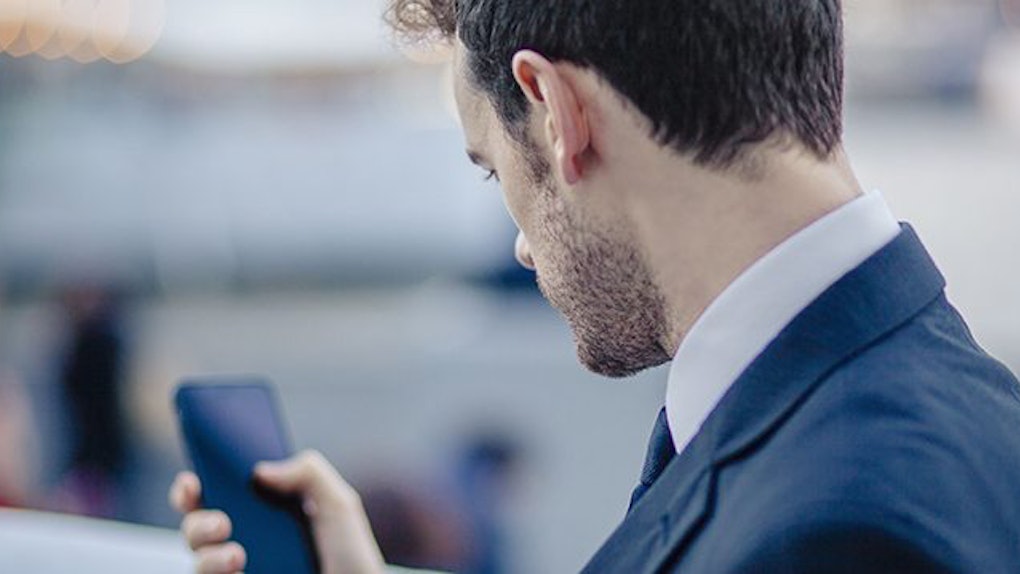 Guys Who Don't Text Back Really Do Like You

I'll admit, I am absolutely terrible at texting.

In fact, it doesn't matter what type of message you send me — text, Snapchat, Twitter, Facebook, email — there's always a chance it could take me days to reply.

That's just the way it is these days. But I know this probably makes me a jerk to anyone who's on the other end of these ignored messages, so I have two things to say about that.

First, my bad, truly. I don't mean to be an asshole with these things.

Second, I'm definitely not an asshole, and there's a perfectly good reason why I can never get back to you.

In fact, I'm willing to bet that most people who don't reply to texts don't do for the same — totally innocent — as me.

What are those reasons, you ask? Well, let's lay 'em out here:

I know the first thing you're thinking when someone doesn't reply your text: This guy doesn't respect or care about me.

Eh, not exactly. It could just be a genuine matter of procrastination. And as someone who suffers from procrastination with every little task, I can tell you it affects response time, too.

I literally think I'm going to reply to every single person who sends me something within five minutes. But then I give myself 10 minutes. And then 10 minutes turns into 10 hours.

Next thing you know, the inbox looks like this. And by that point, you know have to think about both an adequate reply and a good reason for why you're texting back so late.

It just snowballs into an unsolvable problem and next thing you know the inbox is looking like this.

So please, have mercy.

You remember that one counselor who made you feel better about never being able to do your work? You know, the one who convinced you it's because you're a perfectionist, and you'd rather come to class empty handed than produce something sub-standard?

Well I'm here to tell you there's a little truth to that for texting too. I'd love to have a lightning quick reply for everybody, but I'm not just gonna send back any old thing.

Nah, I can't do that. It's gotta be the perfect reply, one that's interesting and one that keeps the conversation going. Here's the downside to that, though. When you can't think of the perfect reply you fall into problem number one.

Then we're right back to the procrastinating. It's not you, it's me. I promise.

When you're in high school and college, you have time to be a phenomenal text-er. Once you become and adult, though? Not so much.

Like, I would love to be as perfect of a communicator as I was a couple years ago, but I have to put so much energy into being an adequate adult (not even great, adequate) that there are some aspects of my social life that have to take a hit.

Devoting the mental energy needed to reply to an ambiguous "how you been?" text is one of those things.

Consider this an extension of the last point I just made. It is really is hard to muster the cognitive strength to reply back to certain texts. That means if you ask me to do anything or think about anything, there's less of a chance I'll reply.

I'll start playing the procrastination game, waiting for free time to ponder an answer to your question (and we all know that free time can never come).

I know, it sounds crazy. But this is the mind of someone who's genuinely terrible at texting. You're much better off sending very direct questions that can be answered easily or giving me a call.

Here's the thing: Because of the pressure that comes with trying to sending a perfect reply and how easy it is to lose track of time while being an adult, the idea of speaking in person becomes way more appealing.

Back-and-forth texts, especially during the day, are just not feasible.

But send one message with "let's meet here," and not only will I make it happen, we'll actually have a healthy exchange that doesn't take two weeks to complete.

So, no, not replying to texting doesn't make someone an asshole. That guy can just be a lazy procrastinator who gets flustered by the simplest of tasks and would rather just set aside time to talk in different ways.