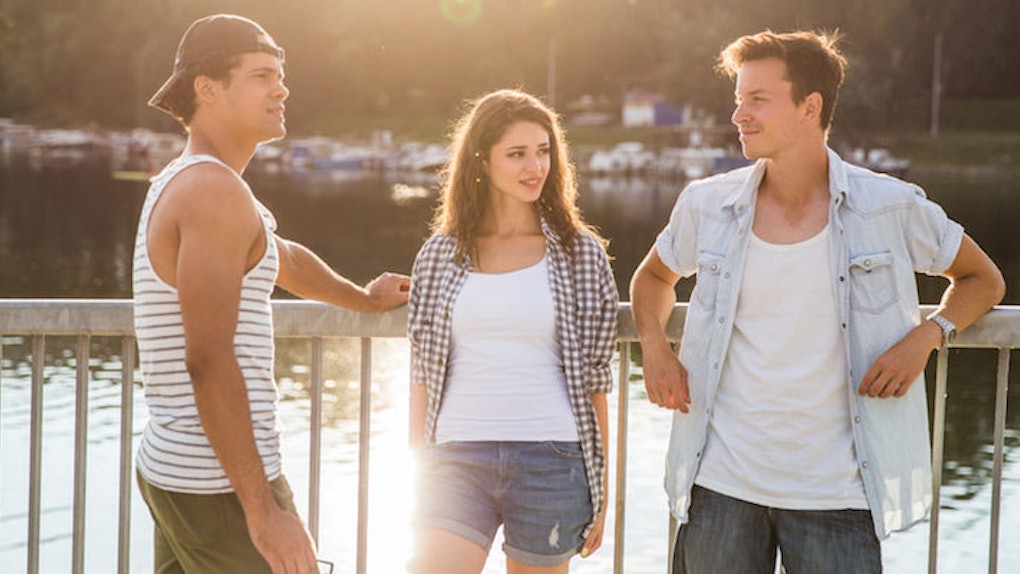 Being the lone sister among brothers is quite the ride. Our brothers made us play with Hot Wheels and GI Joe figurines. We ditched jumpers and hair bows and opted for gym shorts and oversized T-shirts. We were pegged by paintballs and run over by bikes.

As we got older, we learned how to deal with discovering that our friends had kissed our brothers. Our brothers were occasionally thorns in our sides, but they were also our partners in crime. They helped make us into the strong women we are.

Whether we initially realize it or not, being the lone female sibling of the family sneaks into our dating lives. Below, I've listed 10 ways my dating life — and likely the dating lives of other girls with brothers — has been affected by the structure of my family:

1. We often take flattery with a grain of salt.

Guys can't be slick with girls who have brothers. We've seen and heard it all.

We've witnessed our brothers and their friends “spit game” countless times, so we don't fall for much. Unfortunately, this means we are likely to be overly skeptical of kind words, and even genuine compliments. But at least we're less likely to fall prey to a bullsh*tter.

Many of our brothers' happiest, most adventurous and most memorable experiences were made with each other or with guy friends. We know they're making many of the memories that'll be rattled off during toasts at weddings. Girls with brothers know it's important not to impede on “bro time.”

3. Brothers are protective of their sisters.

They'll give us feedback about our date's character. They'll try to steer our heart toward safe waters.

If they don't get a good vibe from a guy, our brothers will drop hints (if they don't outrightly say something about him). My brother once told my date, “If you break her heart, I'll beat your ass.”

Girls with brothers are protected by honest feedback and sometimes even fists.

This means we're likely to enjoy doing some of the same things our guys enjoy. We grew up playing all kinds of sports, including soccer, football and plenty of backyard whiffle ball.

As we got older, we learned to like playing pool and poker. We can't count the number of beers we've downed at bars while watching games on TV with our brothers. Girls with brothers also enjoy doing these traditionally masculine things with their dates and friends.

5. Although not always, a girl with only brothers can be thought of as a "bro."

Throughout our development, we spent a ton of time with males. Our brothers' friends are our friends, too.

We like hanging out with the guys and “bro-ing out.” This can cause some men to think of girls with brothers as “one of the guys,” making it harder to view us in a romantic way. It's easier to friend zone a girl with brothers because she's thought of as a “bro.”

6. Brothers are often naturally competitive with each other, so their lone sister is apt to be as well.

As kids, girls with brothers would never go down without a fight whenever it came to games or competition. This has leaked into aspects of our adult lives.

If you're going to date a girl with brothers, you better enjoy a little healthy competition. Take us bowling or golfing, and be prepared to lose on occasion.

But don't just let us win. We like a challenge.

7. We can't help but compare potential suitors to our brothers, in both the good and bad respects.

He's a baseball player? He'll fit right into our family.

He has an interest in real estate? That'll go over great.

He's a little bit of an assh*le at times? Welcome to the family.

Sometimes, it's hard for a girl with brothers to stop wanting her date to “measure up” to her brothers, or at least have some things in common with them.

8. If our date has a sister, we're interested in how he talks about her.

When he talks about his sister's qualities and quirks, does he sound like he finds them endearing or annoying? Does he have fun stories to share about the two of them?

Is he protective of her? If our dates speak negatively about their sisters or never spend time with them, it's a huge red flag in our minds.

9. We have to date a guy whose good intentions and self-confidence seem to radiate off him.

Meeting your new girlfriend's mom and dad is nerve-racking in and of itself. Additionally, meeting all three of her brothers can be a little overwhelming (if not totally intimidating).

Our dates are guys who could potentially break our hearts, and our families know that. If a guy doesn't have a natural, well-intentioned air about him, he might have a more difficult time around the family of a girl with brothers.

10. Girls with brothers have been around guys their entire lives, so they've grown to have many guy friends.

It's almost more natural and comfortable for us to have male friends instead of female friends. This can prompt suspicion in our significant others.

“Are you sure you've never dated him? Or hooked up with him? Or had a crush on him?” Our love prospects must take our word about our male relationships, be confident in themselves and have confidence in us. Otherwise, they'll have to take their baggage and insecurities, and head for the door.

May God bless our brothers. Cheers to you, and last but not least, thank you.