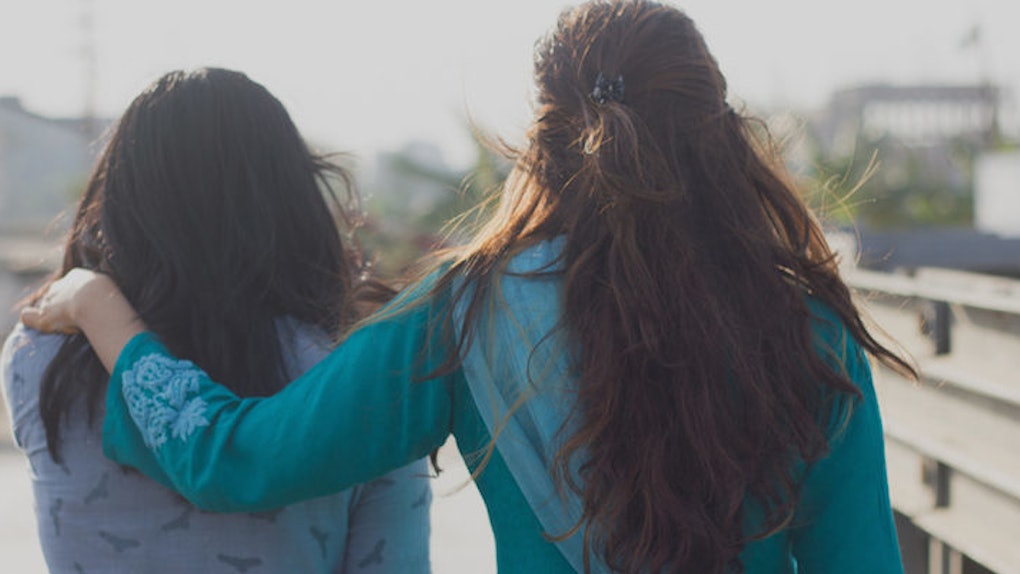 When my sister was 15 years old, she fell in love for the first time. His name was Travis. They dated for almost a year and then broke up, in the same way all 10th grade relationships end.

Since then, my sister has dated other people, but she never got over him. She and Travis were on-again, off-again since they met nearly five years ago.

Just over a month ago, I arrived home, tired from a camping trip with my friends. My sister and parents were at the cottage. Two police officers knocked on the door.

When I opened it, they asked if my parents were home, and they said they needed to talk to them about my sister. Assuming my sister was in trouble (as the wild child of the family), I was confused they weren’t talking directly to her, since she is a legal adult.

They told me they were “trying to soften a blow.” I still didn’t understand, but I told them I’d call my mom at the cottage right away. They left, and I shut the door behind them.

As soon as I closed the door, it clicked, and I thought, “Travis.” I didn’t know what happened, but his name popped into my head.

I called my mom and explained everything. About half an hour later, she called me back with answers. She told me Travis was dead.

His body was found near the train tracks that afternoon. Foul play and suicide were not suspected. It was an accident.

Only an hour later, social media exploded, my sister’s phone with it. Travis’ family told police to contact my sister because she simply could not find out through social media.

I am eternally grateful to Travis’ family for thinking of her during this time. Everyone would have understood if they didn’t think of her, but they did. Their thoughtfulness and kindness in the face of such a terrible tragedy is inspiring.

In the next days, my sister accepted the role of the grieving widow. Travis’ family included her in the visitation service and funeral planning. Their acceptance is something else I’m forever in their debt for.

My sister and Travis were not officially together at the time of his death. But, being accepted by Travis’ family made my sister fully come to terms with her grief. She never doubted if her grief mattered, or if she should be feeling this way.

Grief and confusion make for a deadly mixture, and thanks to Travis’ family, my sister didn’t have to wonder. She knew. She loved Travis and he loved her.

I was in awe of my sister. She is the strongest girl I know. In the face of such calamity, she handled herself with more grace and elegance than could ever be expected.

She spent the week leading up to the funeral taking care of everyone else and making sure everyone was okay. She spent every day with Travis’ family and ran errands for them when they let her.

Throughout any hardship, my father always says we should “adapt and overcome.” My family quickly adopted this as our motto.

She didn’t lie in bed all day, as I surely would have. She got up every morning, visited Travis’ parents, went to work, stopped at Travis’ grave after work, adapted and carried on. I was in awe of her strength.

I was in awe of her charisma.

Old friends she lost touch with reached out to her with condolences. New friends dropped everything to be with her. Neighbors sent flowers and prayers.

The unwavering support she received from the community was astounding. The complete and total acceptance from Travis’ family touched me.

They had always opened their hearts and homes to her, but in the face of tragedy, such acceptance is absolute.

At the end of the burial service, the pastor asked to give the family a moment of privacy. Everyone began to walk away, but Travis’ grandmother grabbed my sister’s arm and said, “You’re part of this family.” It takes a special type of person to inspire such love and devotion.

Travis and my sister had an on-again, off-again relationship for a reason; they were both hot-headed. They fought hard, but they loved harder.

I often look though pictures of her and Trav, and I can easily see how happy he made her. Even if Travis was scowling at the camera (which he often did), you can see my sister’s special smile, the one only he could bring to her face, that made her look even more beautiful.

Even in the midst of tragedy, with tears in her eyes and grief in her heart, her smile still shines. Her smile is healing. I was in awe of her beauty.

In many ways, Trav was my sister’s equal counterpart. He was equally charismatic and special. He inspired the same friendship and devotion.

There were two visitation times, and both had lines out the door and onto the street. During the funeral service the next day, there wasn't an empty seat in the church. During the burial service, the cemetery was just as crowded.

But, it wasn’t just the number of grievers that moved me; it was their pain. Travis had many friends and touched many people. I have never seen so many young adults in so much pain. The amount of tears shed and that continue to fall in mourning is unfathomable.

Grief is infectious. Travis was my friend, and I grieved for my own loss. I also took on the pain of others.

He was 21 years old. Young people are not equipped to understand such loss.

From Travis’ death, I vowed to never judge someone else’s relationship. In the end, all that matters is love.

I vowed to never take love for granted because you can lose it at any moment. Life always has been and always will be more fragile than love. Love is eternal.

Friendship is the same.

I also vowed to never take friendship for granted because death has no prejudice. My sister lost the love of her life at the same time someone lost his best friend.

I was reminded three things: life is short and unfair, true love exists and true friendship is rare. Life is too short to not end every conversation with “I love you to the moon and back.”