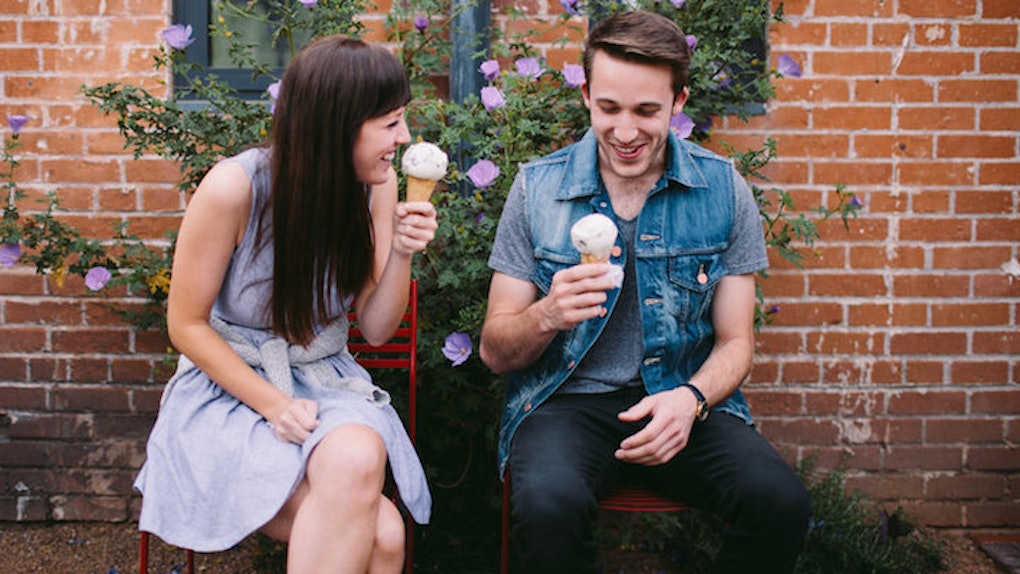 While our society has made strikes to achieve equality between the sexes, it’s impossible to deny that gender roles still exist in 2015 -- especially in the world of dating.

When it comes to dates, regardless of what you believe is fair, there are simply things that are unacceptable for you to do if you're a certain gender. Men do things that women wouldn't be able to get away with on a first date. The same can obviously be said for women.

A lot of "cute" things that women do wouldn't be cute for men. If you’re in need of a few concrete examples, here are 10 things that women can do on first dates that guys could never do -- at least not without a long list of negative repercussions.

I get it. It’s 2015 -- almost 2016 -- and it's time to tear down the walls created by gender roles and social norms. But still -- if you’re a dude out on a date and don’t at least offer to pick up the check, you’re probably not going to be putting yourself in a good position for a second date.

You don’t have to be Warren Buffett or James Bond in order to pay; you just need to be a man.

It’s generally fine for a woman to be a few minutes tardy to a date. I mean, I get it -- ladies tend to put a great amount of effort into getting “ready,” and I surely wouldn’t dare rush the process or hold it against them.

It’s a bit different when you’re trying to prove how much of a gentleman you are and find yourself running 15 minutes late.

3. Disappear to the bathroom for a long time

While out on a date, it’s pretty much a safe assumption that the girl is going to retreat to the bathroom (for 15 or 20 minutes) at least once over the course of dinner. Hey, don’t ask me -- I have no idea what they’re doing in there -- but I do know that it’s perfectly normal for this to happen.

That said, if I ever disappeared for that long, I’m sure the authorities -- and my parents -- will have already been alerted by the time I return.

When women order dainty meals like the salad or a quinoa bowl, it generally sets a pretty good impression. Y'know, yeah, she’s into trends, like fitness and superfoods -- which are both positive things.

However, if a dude were to order the garden with the dressing on the side, I doubt the girl he’s dining with will relay that aspect of the date back to her friends with much confidence.

Women can always overdress, for the most part. I don’t know; I’ve seen women wear jeans to the gym and didn’t bat an eyelash.

Men don’t care about all that. As long as a lady looks presentable and comfortable, we usually won’t start being the fashion police.

That said, if you’re a guy, wear the wrong pair of shoes out on a first date, and you’ll appear to have no sense of style. Which is probably pretty spot-on, actually.

6. Admit you cyberstalked before a first date

Women will always like the guy who plays it cool. That not-giving-a-f*ck mentality has done wonders for mankind (in terms of picking up women, that is) ever since James Dean smoked his first cigarette.

So if a dude were to give the impression that he’s been cyberstalking the girl he's dating, it’s probably not going to look too “cool.” If a woman were to divulge this information, however, she’s just doing her homework, so to speak.

7. Complain about how full you are

Given the archaic gender roles we’ve become subject to over the course of time, if a woman were to say say she’s “stuffed” after a moderately sized meal, she would come off as ladylike and elegant.

On the other hand, if a dude were to whine about how full he was after half a piece of grilled salmon, I’m sure the girl he’s dating would hand him some Tums and bolt.

After a first date, it’s pretty normal to take separate cabs home. You probably want to unwind after a nerve-racking dinner.

Maybe you just both live on opposite sides of town. Whatever the case, woman will -- and should -- always take the first available cab. If a guy were to "upstream" the girl he’s dating, he’ll probably find himself swimming alone for a good while.

9. Talk excessively about themselves

The first rule of dating is to never talk too much about yourself... if you’re a dude, that is.

When out to dinner with a lady, you’re going to want to focus discussion on her. Because you’re a gentleman, and that’s how the f*ck we do sh*t.

If a guy were to spend the majority of the date talking to himself, I doubt she’s going to want to sign up for a second round.

While I don’t think that all girls should let out a burp after a nice first date, I don't think a man would be too bothered by this. In fact, he would probably see this sort of thing as cute -- strange as it may sound.

It would be nice to know that ladies find this equally as cute. They don't, though.