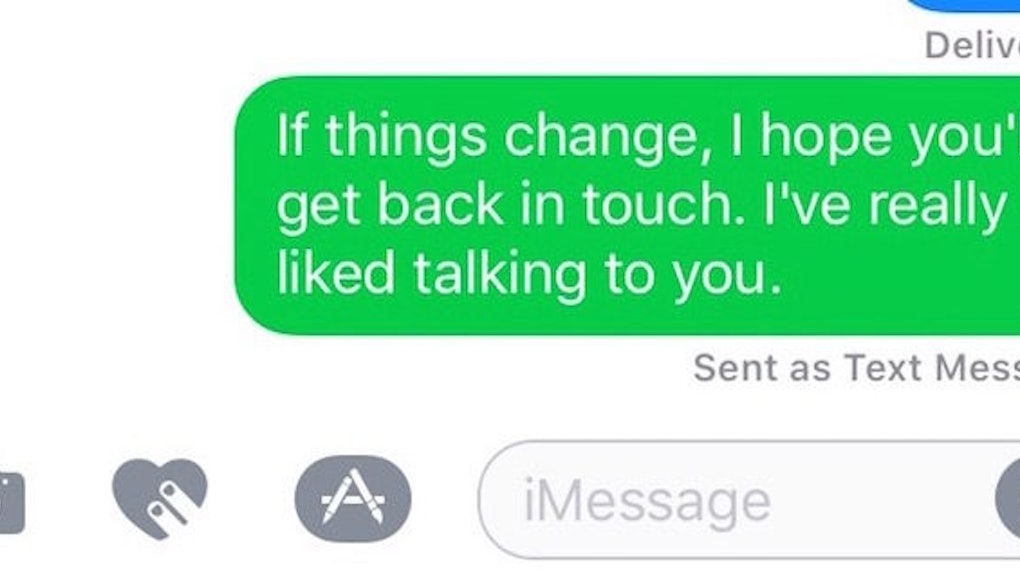 Girl Ghosted Mid-Convo By Guy She Talked To For Weeks

This week, we have Alicia* who was suddenly ghosted by a Bumble match she'd been talking to for weeks on every form of social media:

Thinking back, I realized I had actually been talking to him (we'll call him Peter) for about a week. We probably matched and started chatting on Bumble around January 8 or 9. Although I can't find any date/time stamps on the Bumble messages, I know we were chatting the day of the Clemson/Alabama game (January 9). That was a big topic of conversation for everyone here in the south, but I remember the day because he was at a gathering watching the game with a man I work with. (My co-worker is friends with Peter's father.) Peter told me the next day that he told my co-worker we had been chatting, and the co-worker said I was awesome.

I'm including this part in the story because I think it should be noted that he was talking about using a dating app and chatting with a particular girl at a party where his family was present. This would make you think he does not have a girlfriend if he was talking about it so openly. We continued to talk throughout the week, both of us equally participating in the conversation. It really ramped up on Saturday, January 14. We both invited each other to the bars we were at, but I was at a birthday party that I couldn't leave, and he was hanging with a friend who had just gotten back from Iraq. Sunday (while attending a bridal show with my best friend — salt in the wound), Peter and I texted throughout the day, even getting into a serious conversation about whether or not we wanted children. (He doesn't; I do. We decided to actually hang out before we break up over it.) He was super funny and sweet and seemed totally normal.

He was super funny and sweet and seemed totally normal.

We talked about getting dinner this week. And sometime during the day, we added each other on Snapchat and followed each other on Instagram in the evening. I liked one of his pics, we texted back and forth, and then, he liked five of my pics.

I sent a couple texts teasing him about the pictures he chose to like. Then, nothing. No response.

It was only about 7 pm, but I thought, hey, maybe we was lying on the couch and fell asleep — no big deal. Abrupt for sure, but I wasn't going to read too much into it. The next day, I notice he is no longer following me on Instagram. I think I checked because after not hearing from him again all night or the next morning, I sort of had a gut feeling there was something strange going on. Around noon, I sent him a GIF referencing a joke we had made several times before. I received the texts in the attached screenshot in response:

Around the same time, I see that he deleted me on Snapchat, and now, I know that he full-on blocked me on Instagram. (He didn't simply unfollow me, as I previously thought.) Given that my last text would only go through as a text message and not an iMessage, I'm wondering if he also blocked my phone number, but I'm not sure if that's what that means.

As of this moment, he has neither unmatched me on Bumble nor deleted his profile.

As of this moment, he has neither unmatched me on Bumble nor deleted his profile.

I sent the message you see in the Bumble screenshot yesterday afternoon (January 16). He has not responded.

So that was that. Dumbfounded doesn't really cover how I feel right now. Is he in the CIA? (I checked with my co-worker — he doesn't think so.) Did his friend who just came back from Iraq recruit him for some black ops mission? Is he about to go to jail? If it was really not about me, and it was something else that is somehow stopping him from dating me (illness, family drama, etc.), what would be the harm in still following each other on Instagram or Snapchat? Why go so far as to block me? And if it was about me, why not just totally ghost me instead of sending those cryptic messages?

I feel like it must have something to do with another girl.

I feel like it must have something to do with another girl — someone looking at or knowing who he's following on IG or Snapchat. But like I said earlier, I didn't think he had a girlfriend. Was an ex watching his Instagram activity so closely that she saw the moment he liked some of my pictures and immediately begged for him back? Or threatened to kill me? Is he protecting me in some way? He made reference to a few ex-girlfriends in our conversations, but it was nothing negative and nothing that made it sound like there was one still in the picture. And if it was an ex, I don't know why he wouldn't just say that. Everyone has exes. Whatever it is, that handful of texts is probably the most dramatic one I've ever received in my life. I want to be clear that I am not heartbroken, upset or crying into my wine over this.

I want to be clear that I am not heartbroken, upset or crying into my wine over this.

Like I said, I would be totally open to talking with him again. (Although, after this is published, that point could be moot.) I'm not angry, hurt or otherwise overreacting, considering we've never even met in person. I'm just baffled.

I get that you don't really owe too much to someone you've never even met in real life. And based on the vibe I'm getting from Alicia, she understands that, too.

What's stunning and honestly almost comical about this whole thing is what a giant freaking DRAMA QUEEN this guy is.

Like, was deleting her on every social media outlet really necessary? She didn't cheat on you with your best friend after 13 years together. She actually didn't even do anything.

She's some random girl you were causally talking to for a couple of weeks. Going out of your way to block her on everything seems a bit excessive.

I mean, I guess as far as I'm concerned, blocking someone is reserved for people who have REALLY done you wrong: people who are either way too creepy and dangerous or people who have hurt you so badly, you can't bare to see they're alive and well.

But that's just me. What do you guys think? Was his reaction as dramatic as I think it is? Do you see a possible reason for him ghosting her?

Have you had an experience similar to this? I always want to hear all about it!