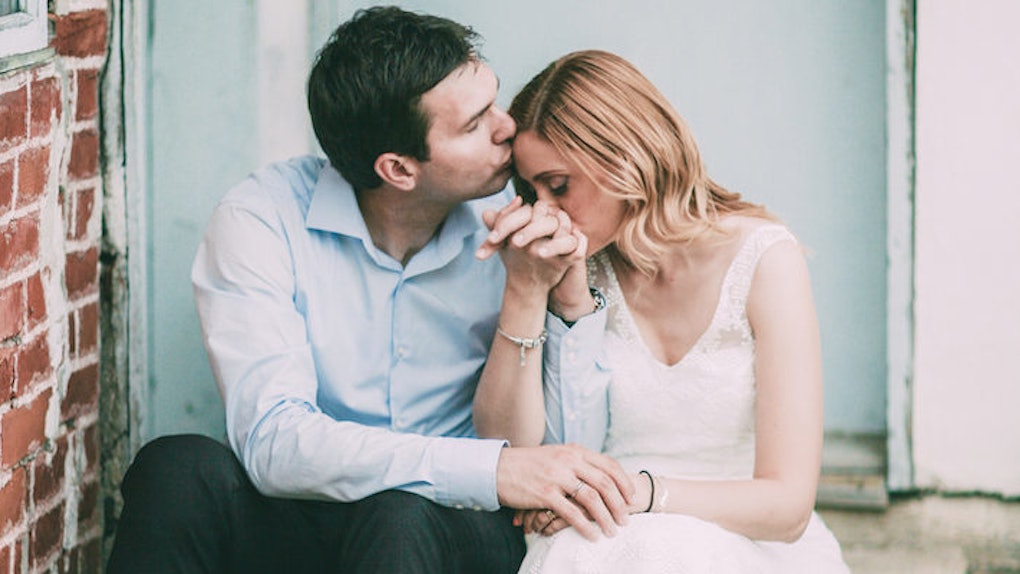 Feminism nurtures an equal relationship where the tasks are split evenly between the man and the woman.

A 50/50 romantic partnership is formed, making questions such as, “Who wears the pants in your relationship?” outdated because both partners wear the pants.

In fact, let’s put aside the “stigma” that feminism may entail for some and accept the following: True feminists do not want to dominate their partners; they want an equal relationship.

What does an “equal relationship” mean? It means societally-constructed gender roles, as well as the traditional dynamics of power, are now gone.

The result is the following: "You picked out the restaurant? Great. I’ll pick out what to order." "You paid for the movie? Great. I’ll pay for the refreshments." "You drove down all the way to visit me? You’re wonderful. Why don’t you pick out dinner? My treat."

It’s also not about “keeping score,” but making sure both parties are happy and able to have their own preferences fulfilled. Both parties can shine and become better versions of themselves.

Now, I need to address the concern of how both partners are fulfilled.

To people who have a more traditional view of gender dynamics, this concept is blasphemous: the idea of the man not always paying and both the woman and the man sharing the responsibilities right down the middle.

But, taking a look back at history, I’ll explain why the 50/50 relationship makes sense.

See, the public sphere (of work and politics) used to be solely occupied by men, and the private sphere (of home and family) used to solely be the woman’s responsibility. Men were the only breadwinners, and as a result, they paid for dates and provided for women.

But with the rise of women entering the work sector, along with the feminist movement, men are no longer the only moneymakers.

This leads to our society today: Men and women work side-by-side in their careers and in school; they also share the same social setting. Everyone makes money and wants to have nurturing and fulfilling relationships.

It only makes sense that feminism, or advocating for equality among sexes, nurtures these relationships, creating a balance between the male’s role and the female’s role — aka, a 50/50 partnership.

1. Does he pay for everything? No. We both pay.

This is always a big one. It’s the age-old concept of whoever holds the money has the power, and it stems from the old courtesy of the man coming to the rescue.

In the dating context, it’s translated to the man coming to the rescue…at dinner.

Furthermore, a healthy, balanced relationship is one where no one owes the other person. It is also one where both parties show they can provide for their partner (equal reliability).

And I need to clarify that in feminism, there’s nothing wrong with the man paying, but there is something wrong if the man pays the majority of (or all) the time.

Guys, I think you’ll appreciate fewer dents in your wallets. And no, not paying for dinner doesn’t compromise your manhood.

And girls, don’t feel shy to take the check. If you were so confident during the work meeting, let that confidence translate to the date. Let him know you’re thriving as well.

2. Does he hold the door open for you? No, that’s really not necessary.

Here’s another big one; it goes back to the "men come to the rescue" concept.

Old social courtesy dictates men do things such as holding the door, paying the bill and ordering for the woman. It supposedly makes the woman feel like a “woman,” protected, taken care of and loved. The man feels like a “man,” protective, strong and dominant.

Guys, rather than worrying about getting the door to feel like a “man,” how about actually being a man and being reliable (picking up the phone, reassuring her you’ll be there for her in an emergency, helping her through a crisis by being a problem-solver, etc.)?

To make this fair, guys, I promise she’ll do the same for you.

3. Does he make all the decisions? No, we both do.

Feminism empowers women to become stronger, and part of becoming stronger is making decisions. However, feminism doesn’t disempower or emasculate men; it simply brings on women as their equals.

Men can continue on with their roles, but they must include women. So when it comes to making decisions in the relationship (what movie to see, where to eat, who to hang out with, who to double date with, etc.), all decisions will be made 50/50.

By doing so, both parties feel enough “breathing room” in the relationship. No one is overwhelmed by tasks since they are evenly split.

A good example of how to manage decisions is the compartmentalized method. If the woman is in charge of the schedule (who to see, where to go when, etc.), then the man can be in charge of picking out lunch and dinner. This becomes a clear breakdown of tasks within the relationship.

4. His friends or your friends? Both. We’ve got a great dynamic going on.

In many cases, the female love interest will join the male lead’s friend group willingly and without question. It’s like she left all her other friends behind.

In real-life feminism, we don’t do that. In fact, time is split between friend groups. (I’ll admit that, sometimes, this is really done out of social courtesy.)

So a word to the wise: Know when you’ve had enough of each other’s friends, and know when to attend things solo. More importantly, in a feminist relationship, both partners also shine socially (regardless of who they’re hanging out with).

If your relationship is nurturing and you promote open communication as well as the philosophy of “it’s okay to disagree,” I promise you that as a couple, you’ll exude great energy in social settings.

You’ll make for the dynamic pairing.

5. Is he the one who shines professionally? Yes, but I shine too, and he’s supportive.

Perhaps, the biggest outcome of feminism is the breeding of strong women in the professional and academic setting.

Both partners need to be supportive of each other, even if they are in the same industry.

As far as work and academic events go, when it’s one partner’s night to shine, the other should be standing there proudly.

I know this may be hard for some men to do, but let’s logically think about it. If she’s always there hearing you complaining your work, helping you revise your documents and showing up to your work functions, isn’t it only fair to give the same amount of support?

Wouldn’t you rather have a partner who is talented and who you can brag about for brains as much as beauty?

There you have it: five ways feminism actually nurtures relationships.

When couples welcome feminist philosophies into their lives, the relationship is taken to a whole new level. It is no longer only one person guiding the relationship, but both people embarking on an equal partnership.

Let’s store the sexist notions in the past and allow couples to move on as society has.