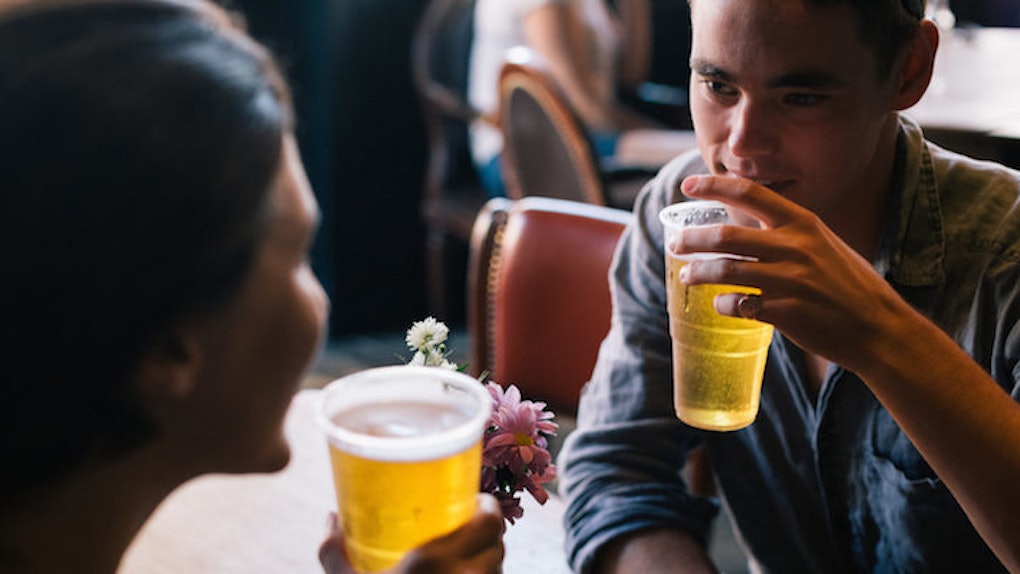 Faucet Feelings: How To Identify And Avoid This Classic F*ckboy Move

I’m standing in line outside of the trashy college bar my friends and I end our nights out at, despite the fact we’ve been out of college for years.

That’s how I meet him.

He (who looks similar to Brad Pitt after the number of drinks I’d had) and his best bud start talking to me.

He's painfully cute, like an eager puppy with brown eyes and wavy hair.

His lips are what get to me. They're so sensual.

Inside the bar, the guys buy a pitcher of beer and give me a cup. He stands close to my side, laughing at all the dumb sh*t I say.

When he kisses me, leaning over sideways to brush those lips of his against mine, I fall for him.

I stick a Jolly Rancher in my mouth. He kisses me again, and he stops and traps the watermelon candy between his teeth.

Jolly Ranchers will never be the same for me.

Our bar romance quickly flourished into daily texting — sending each other silly pictures and selfies during our workdays — and multiple weeknight hangouts.

He would show up at my apartment wearing this floppy-looking grin, looking cuter than the most adorable member of One Direction in his business casual after work.

It surprised me how quickly we fell into the early roles of dating.

It only took a few weeks until he started “we-ing” things.

You know how it is.

I smiled when he said things like that —“We are going to do this,” and “When we do that...” — thinking it was cute.

But I sure as hell wasn’t we-ing him back. I’d dated too long to know that a handful of weeks was still too early for “we” talk.

But that didn’t stop me from liking it or liking him.

I told my girlfriends I thought this guy was actually someone I could see myself dating. We were heading in that direction, you know?

His friends would see us together and say things like, “Man, I wish I had a girl like that.”

He would call me on Saturday nights when he was going out with his bros and tell me where my friends and I should meet them.

And when he would spot me at the bar?

His eyes would light up. He'd follow me until he stood next to me, putting his arms around me and claiming me.

An innocent Monday after we’d been steadily seeing each other, a wheel slipped off the track we’d been riding on.

I felt the first bump of derailment on what had been such a smooth trip so far.

By the middle of the next week, I knew something was up.

He was MIA in my inbox. No plans had been made. I was giving him space (he'd said he had a cold), but I was still a little confused.

A week later, and I still hadn’t heard a peep from him.

He had officially ghosted me. He pulled a classic Houdini, f*ckboy move and dropped me just when things were starting to progress in a relationsh*t.

When I saw him a few weeks later out at the bar, I cornered his dumb ass (while realizing his puppy-like cute face more closely resembled a drunk, confused dog who should be forced to sleep outside).

“What the hell happened to you?” I said.

“What do you mean?” he said, stupidly. I was so furious, and I didn't know if I could stop myself from physically lashing out.

“You know what I mean. You just disappeared. What the f*ck?”

“Oh, well…” he started, again, stupidly. “Things just started getting so serious between us. I wasn't ready for that.”

There was a long pause while I mentally reviewed every conversation we'd ever had.

I remembered all of the times he brought up meeting his parents, how we'd go boating together in the summer or just hang out at his place where he'd BBQ something for us.

“So, you just stopped talking to me?!” I shouted.

I’d drank enough to kill a small animal at that point, and I was barely containing my frustration with him. He looked bewildered and cornered.

It’s not even important to recount what sputtered out of his (okay, still cute) lips. It was all f*ckboy nonsense.

Later, much later, when I’d sobered up and gotten over how annoyed I was, I realized he had “faucet feelings” for me.

It’s when people turn on their feelings — pouring out warm goodness and “we” promises — and then they cut that sh*t off and hit you with the icy coldness of their absence.

Faucet feelings are a real thing, and only f*ckboys are capable of executing them.

It’s hard to see the signs of faucet feelings because they happen so quickly. There’s no consistent pattern.

But for every nine people who pull faucet feelings on a person, there’s that one person who actually follows through on his or her “we” promises and pursues a relationship.

Of course, all of this heartache and frustration could be avoided if men and women were mature, communicative and clear about their feelings and intentions with one another.

But until that happens, we’re f*cked.