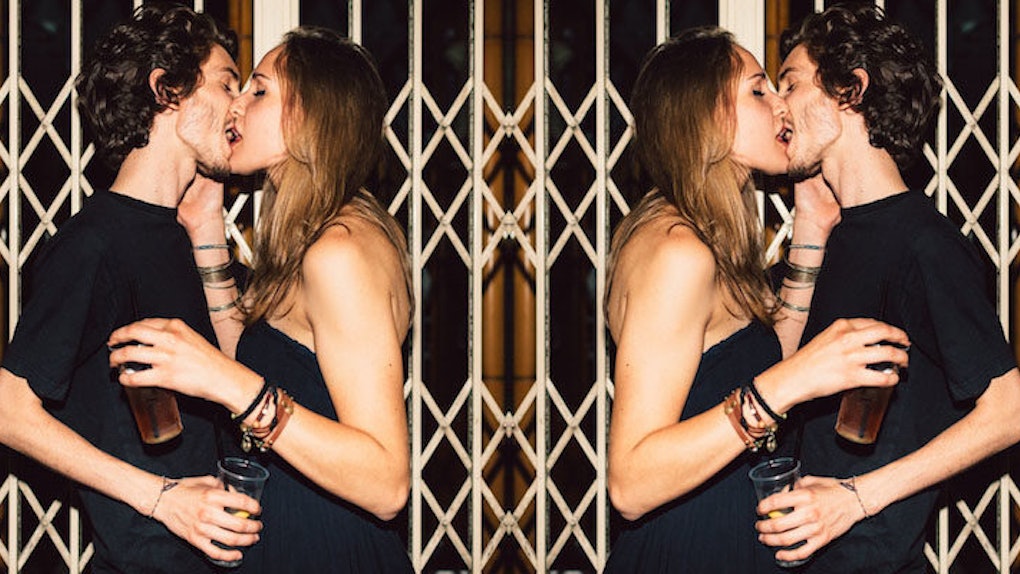 Drunk In Love: What It's Like To 'Fall In Love' Just For The Night

Like most epic love stories, mine started with me and a friend roaming the streets of Manhattan, slightly buzzed and not-so-slightly lost.

I saw a cute guy in the distance and made a very pitiful attempt at smoldering eye contact. Much to my surprise, he smiled and approached us.

“Hey, so, if you guys are actually as lost as you look like you are, you should come with my friends and me to this karaoke bar down the street,” he said.

We had nothing better to do, and he didn't seem like an axe murderer, so we decided to tag along. As we walked there, he told me all about himself.

Well, he told me his name (let's call him Jack) and that he played basketball in college (at a small school in the Northeast that I'd never heard of).

I told him where I went to school in California; he assumed I said Santa Barbara, and I didn't bother correcting him (it's Santa Clara). Really deep stuff.

We walked in, and he immediately grabbed my hand and led me to the bar. While I waited for him to order our drinks, I got to chatting with two nice, older women.

They had come to this sh*tty karaoke bar for their twentieth best-friend anniversary. Eventually, Karen, my favorite of the two ladies, leaned in close and asked me how long my boyfriend and I had been together for.

“Oh I don't have a boyfriend.”

“Well, then, who's that lovely boy you walked in with?”

Before I could respond to my girl Karen, Jack stepped in. “Oh we aren't dating — we've just been best friends since the third grade.”

He put his arm around me and looked into my eyes in an adorable "I've seen you fart multiple times and I STILL love you" sort of way.

Karen was floored. “You two seriously have never even considered anything more!? I mean, the chemistry between you two is just so palpable. And you are clearly so comfortable with each other. Why not?”

He let out a deep sigh. “It's not for a lack of effort on my part, Karen. Zoe" -- I'm still not sure if he was making up a name to keep up with this lie or just literally did not know my name -- "here is convinced that it would ruin our friendship.”

This is where I stepped in.

“He's just more like a brother to me," I said. Our families are best friends. I haven't been on a vacation without him since I was eight. Can you imagine if things didn't work out? It would be devastating.”

So here's the deal with Karen. She was in love with her male best friend growing up and is now happily married to him.

Karen saw a lot of her relationship in me and Jack, and she made it her mission that night to make us go home together and realize that we can be more than friends.

How was she going to go about her mission, you ask? By buying us enough tequila shots to get us absolutely SLOSHED.

Now, I don't know much about the real Jack. But I do know two things: He played basketball in college and he, much like me, is not one to refuse a free tequila shot. So we milked it.

The rest of the night was spent swing dancing as we gazed lovingly into each other's eyes, belting “I've Got You, Babe” on the karaoke machine and having 'secret' heart-to-hearts with Karen about our deeply-rooted feelings for each other.

A couple of hours and eight tequila shots later, Karen dared us to "just kiss already!" I said I would kiss him only if he promised not to break my heart.

He looked me in the eyes and promised he would never. We shared what really was our first kiss, and Karen just about shat herself with joy.

I need to make it clear here that I don't normally go home with random guys I just met. To be honest, this is the only time I have ever gone home with a random guy.

But there was something about this very weird very fake love affair that felt oddly real in my drunken haze. I felt safe.

So I went home with him. We went back to his apartment, and I'm pretty sure we fooled around for about four minutes before we both fell into a deep, tequila-induced sleep.

I woke up the next morning hyper-aware of the fact that this guy was not only not my best friend since third grade, he was also a total stranger.

So, like any sane person waking up in a stranger's bed, I pried myself out of his nice, chiseled, basketball-playing arms and snuck out of his room as quietly as physically possible.

I had fallen in love for the night, and it was over. Now, my story is unique in that we were both sociopathic liars who were bound together by our attempt to swindle free tequila shots from a perfectly nice middle-aged woman.

But this phenomenon of drunkenly confusing our late night rendezvous with STRANGERS for real bonafide LOVE isn't just my story.

People have a million chances every night to create their own faux, short-lived romances. But the morning sun the next day reveals the truth: It wasn't love; you were just drunk.

The high I felt as Jack spun me around on the dance floor wasn't brought about by a pure and undying love; it was a high from a massive amount of tequila shots.

Because who even is he?

You don't take his name; you forget it.

You guys aren't one step closer to marriage; you guys are strangers. Dare you to tell me his full name tomorrow morning. Without looking at your phone.

You're not opening up to him; you're oversharing to a stranger.

You're drunk. You're drunk, and you're divulging way too much information.

You're not feeling the heat; it was just a shot.

What you're experiencing isn't the same as the fire of a passionate love affair. It is the alcohol literally burning your insides.

You don't have the butterflies; you just need to throw up.

This is not the same cute anxiety you had as you waited for your high school sweetheart to pick up you up for your first date.

This is not the "Oh, f*ck" you said before you yacked all over that frat basement freshman year of college.

He's not “the one”; he's actually just a soft five.

Beer goggles are strong. Let me be the first to tell you he is not that hot, and honestly nobody is that funny.

Tell me that the 10 you drunkenly scored last night was still a 10 the next morning, and I'll give you one million dollars on the spot.

You're not on cloud nine; your vision is just clouded.

Your drunken dyslexia is mistaking “lust” for “love.”