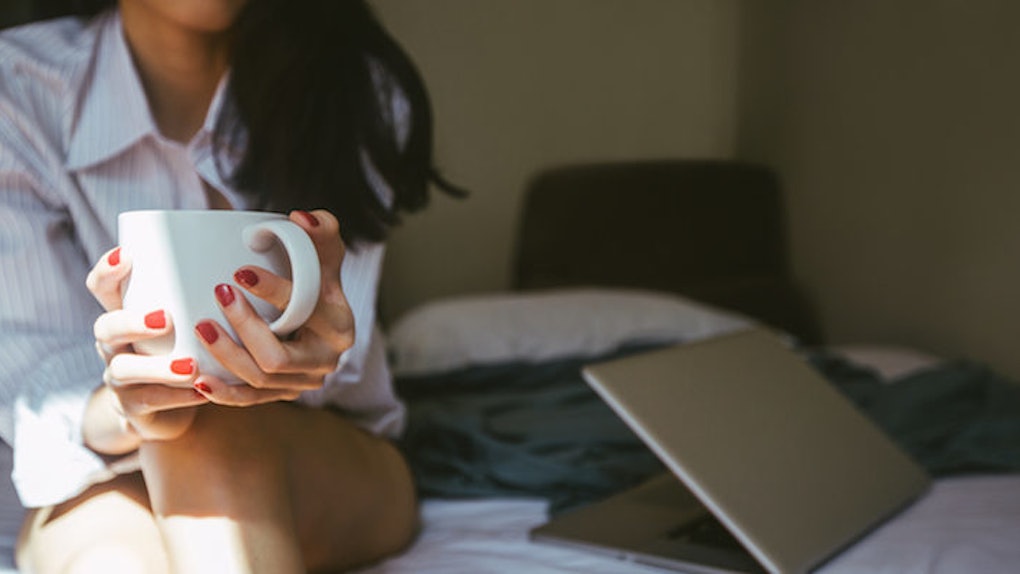 It was freshman year of high school, and I was not quite over my middle school crush. Let’s call him John.

I'd had crushes before, but John was different. He was the first boy I ever really like-liked. The first boy I had real bonafide FEELINGS for (I get those sometimes, I swear).

John and I went to different high schools, and, like most middle school crushes, we grew apart. The only remaining thread holding us together was our Facebook friendship. So, obviously, I stalked him. I stalked and stalked and got sad every time I saw his pictures with other cute 14-year-old girls who were NOT ME.

Worst of all, every picture was a reminder that he was still very much alive and well and just simply not interested in hanging out with me.

Finally, it hit me: Why the f*ck was I torturing myself like this?!?! So I went ahead and blocked him from my news feed.

And BOY, OH BOY DID I FEEL LIBERATED. "Out of sight, out of mind" really did wonders for my young adolescent self. No more stalking him and the girls in his pictures (and possibly even those girls' mothers) and oh, look, there goes an entire night of my LIFE.

I am 22 years old and very much over my ginormous crush on John, but I still stand by my decision to never stalk a boy I like on the Internet. I like that feeling of freedom. I don’t want to sacrifice it -- ever. I already devote so many of my waking thoughts to analyzing all of the information that a boy has given me, himself, so why the f*ck would I go out of my way to find a whole slew of NEW information to spiral over?! No, thank you.

I know my decision is not a popular one. It seems like every girl I know is intent on finding anything and everything there is to know about a guy online before she even goes on a first date with him.

A few months ago, my co-worker, Alexia, got herself into trouble on a first date, when the guy called her out for having viewed his LinkedIn profile. And give my best friend Charlotte a guy’s first name and hometown, and she’ll get you pictures of every single one of his ex-girlfriends, his alma mater, a detailed copy of his professional resume and maybe his Social Security number.

My cousin Caroline genuinely finds it UNSAFE that I not only don't Google my dates, but also keep our social media lives entirely separate if the relationship progresses.

To a certain extent, my cousin is right. I have gotten myself into some awkward romantic situations that could have been EASILY avoided by a simple scroll through his profile. My refusal to stalk boys on the Internet has caused me to unknowingly wind up as the other woman on more than one occasion. But, to be honest, other than missing out on that kind of huge factoid, there have been no real drawbacks.

Every boy I see is a fresh start. I am getting to know him on our own timeline. I’m not sitting around waiting for him to mention the ex I’ve already seen a million pictures of. I’m not trying my very best not to awkwardly blurt out the name of the company he works for before he even tells me what his field is.

This is probably why I have such an aversion to dating apps. I just really don’t want to see a bunch of pictures of you (on another note, has anyone else noticed guys are never as hot in their pictures as they are IRL?) and know how many random friends we have in common and how many miles you are away from me at THIS VERY MOMENT before we’ve ever even met.

And, honestly, stalking is a two-way street. I don’t want to be hyper-aware of every photo that’s uploaded to any one of my social media accounts just because some guy might be stalking me and reading WAY too deeply into a drunk picture of me and my best guy friend.