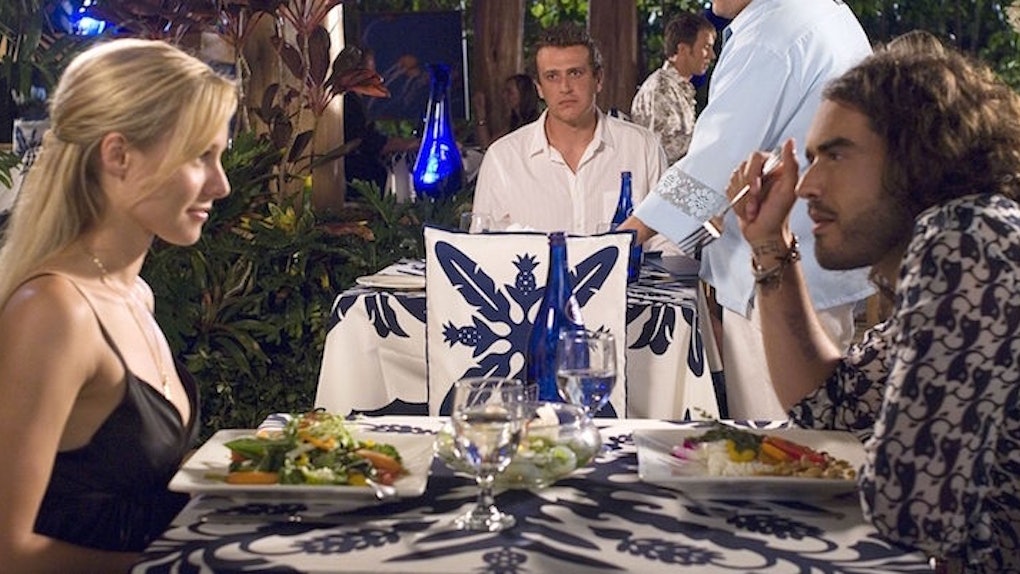 There is nothing in the world worse than running into an ex. But unless you've immigrated to Australia, it's probably going to happen, babes.

Especially if you're a lesbian. Being a lesbian is like living in a small town where everyone goes to the same four bars night after night. Awkward run-ins are inevitable, no matter how big of a city you live in. That's because our community is small and extremely incestuous.

Whenever I hear a straight girl wail, "I don't want to go to the party because I might run into MY EX," I get super condescending in my head and wickedly chuckle to myself and her easy life.

If was afraid I was going to run into an ex at a party, I would never go to another party. Because the hard truth is, exes are going to be at almost every party, bar or event I'll attend for the rest of my life.

Not only have I experienced ex run-ins a thousand and some times, but I've also been through it gazillion times when I'm with a new girlfriend.

And if you think handling these kind of awkward situations is tough when you're straight, it's even more drama when you're lez.

We gays were suppressed for so long that we're wildly outspoken now. When everyone already disapproves of your lifestyle, it becomes pretty easy to recklessly voice your opinion, even when it's inappropriate timing.

I've been cursed out by new girlfriend's exes, I've had my ex be rude to a new girlfriend and I, myself, have recklessly acted like the crazy ex-girlfriend when an old bae came to the bar with a new bae.

It's a hot mess. And you wonder why I have such stubborn dark circles beneath my mascara-laden eyes.

But you know what, sweet kittens? I've completely gotten over the fear of running into an ex because I've been there and done that so many damn times. I've survived every awkward ex run-in possible. And I've come out the other side a strong, strong woman.

So today, I'm going to act as your lesbian tour guide. I'm going to gracefully teach you how to seamlessly navigate the dark and stormy waters of running into an ex when you're with a new bae.

Because there is a specific etiquette you must follow in order to maintain your class, be respectful to both vulnerable parties and not make a huge fucking fool out of yourself:

Be honest with your new bae.

Listen up, kittens: The worst thing you can do is try and pull a fast one on your new bae. Do not — I repeat, DO NOT — try and keep it a secret that your ex is sitting pretty at the bar.

Do not — I repeat, DO NOT — try and keep it a secret that your ex is sitting pretty at the bar.

Your new bae will sense that you're feeling uptight, and that kind of uptight energy will rub off on them. They will start to feel strange, and probably blame themselves for your bizarre, dark mood.

"Shit, do they not like me anymore?" is what your boo will think with a furrowed, worried brow.

They'll think this because they will inherently sense that something is off, but they won't be able to place it. And we humans tend to blame ourselves for everything because we're self-obsessed and think everything is ABOUT US.

It's not fair to your new significant other to fib. In fact, you must always start a relationship with total honesty because the habit of lying — even if it's to save your partner's feelings — always backfires. Lying is like casting a death wish on a relationship.

So, just let them know quickly that your ex is on the premises. I promise you an awkward, five-minute conversation about how your ex is in the vicinity is a lot better than a night full of secrets and lies.

Plus, they will find out. And then you'll really be in the dog house.

Be extra affectionate with your new bae.

We're all human. Exes are a scary thing to anyone in the throes of a new relationship, and rightfully so.

So, it's natural that the new bae is going to be feeling a little vulnerable in front of your ex, even if they're like me and refuse to show it and act all aloof and cool.

Trust me when I say it's all an act. Even the baddest of babes are feeling super jealous and threatened inside.

The best thing you can do to show allegiance to your new bae is putting your arm around them. Remember, your ex is your ex. There is no need to be worried about hurting their feelings.

Remember, your ex is your ex. There is no need to be worried about hurting their feelings.

Bottom line is, no matter how you feel about your ex, you once loved them. And it's disrespectful to the love you once shared to all of sudden ignore and alienate them.

Say hi, even if you hate their guts. Acting like they aren't there is not classy, and we always want to be classy broads. Take the effing high road.

However, it's totally NOT necessary to rub the fact that you're soooo happy in your new partnership in their face by boldly strutting up to them with your hot new SO in tow.

Plus, it's not really nice to your new SO, either. You're going to put two undeserving people in an awkward situation that could've been avoided had it not been for your ego-stroking behavior.

If it happens by the will of the universe and you run smack into each when your arm is wrapped around the waist of new bae, don't be a dick and not introduce the two of them. But don't force a weird trio greeting.

If you all serendipitously meet up, or if your new partner insists on meeting your ex, fine. But don't play with fate, twist things around and introduce two people who don't want to look at each other, let alone be introduced.

If there is drama, leave the scene.

If, all of a sudden, your ex starts acting like a maniac, loudly talking shit and throwing back shots of tequila, now is not the time to be proud. Leave your ego at the door, and quickly leave the scene.

I don't care if the bar is your territory, if it's a really fun party or if the host was your friend first, the best thing to do is to not engage with crazy.

Crazy is a desperate bitch, pushing your buttons, begging for you to pay attention to them. And if you stay at the party, you will get sucked into the dark rabbit hole with your crazy ex.

My therapist used to tell me it's not a tug of war competition if you just put down the rope and refuse to participate in the game. So, just don't participate. Remove yourself from the situation.

Trust me, I know all too well.