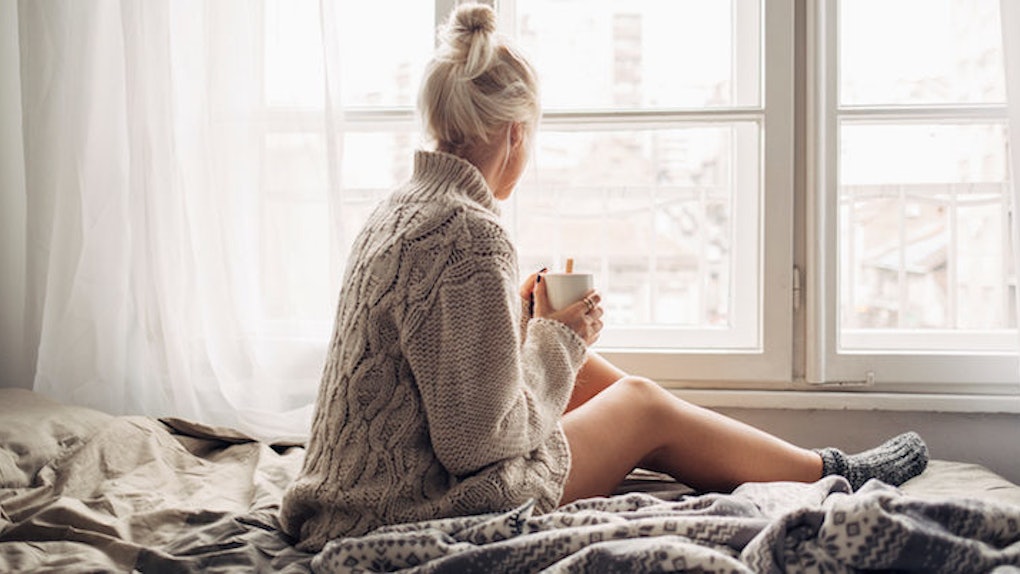 Listen up, ladies, I've been broken up with before, so I know what that pain feels like.

But no matter how many times I've been stung by the poignant pain of heartbreak, I can't seem to quite brace myself for how it makes me feel every damn time. And the worst part is, it feels the same way every damn time.

You'd think, by now, my heart has gone through enough training and trial-and-error phases to prepare itself for being rejected, abandoned and torn apart. But it hasn't, and it won't.

Nothing can make the absence of someone who's been in your life 24/7 for a year any easier, especially when they've left abruptly without providing any real closure.

I've done everything you're “supposed” to do after being broken up with as a shitty means of coping. I've spent a lot more time FaceTiming my friends, I've called my mom approximately 74 times a day (every day) and I've consumed copious glasses of wine.

Whoever “they” are, they're dirty, rotten liars.

The fact of the matter is, your mind will be stuck on this for a while, no matter what you do.

You'll pull apart every last detail of your last relationship wondering where you went wrong, why you're being cut off so suddenly and (*gasp*) if there's another girl in the picture.

This is not a “how to” article on how to cope with heartbreak, so if you're waiting for a pleasant turnaround, I suggest you continue looking for a different, more uplifting piece.

I'm going to give it to you straight, and while it may seem like tough love, I'm really just trying to be realistic with you.

No matter how many boyfriend you've had or will have, it will always hurt just the same.

Your heart is big and loving and capable of repairing itself, hence why it hurts so badly when it is constantly being split.

The second you get over your last relationship and begin to feel whole again, your heart is going to split the same way it did with the last guy.

It's normal to have a whirlwind of emotions every single time. I have, quite literally, felt like Jeckyl and Hyde post-breakup.

At first, I was pissed. Then I was consumed with overwhelming sadness, which was followed by an everlasting state of denial because I convinced myself he'd come back (he didn't). And then, I started to accept things.

Was this the guy I wanted in my life, anyway? If he doesn't want to be in my life, then why should I want to keep him in it? Right? Yeah!

This mindset is what helped me start to feel super empowered, which quickly spiraled back down to that sadness phase when I started to think about starting over with someone else and opening up to someone new all over again.

(Oh, then you have to worry about comparing them to your ex, too... but that's a different article.)

So, yeah. Needless to say my mind has been occupied with varying thoughts, all of which make me feel several different emotions.

You will feel all of these things for every single breakup.

Just because you've been hurt before doesn't mean you'll be braced for impact for your next breakup.

Just because you've been hurt before doesn't mean you'll be braced for impact for your next breakup.

Do you understand how fragile your heart is? You've just poured your entire heart just to give the person you love your all.

You've bent over backwards and would've crossed oceans for this person. Nothing can prepare you for their decision to leave your life.

You'll have so many questions, and quite frankly, you should. I don't understand, nor will I ever understand, why people have such a hard time seeing what they have right there in front of them.

I wish this is the part where I could tell you to stop dwelling on it, but that's always much easier said than done.

The best advice I can give you is to feel. Feel every emotion you're going to feel, and feel them powerfully.

Feel every emotion you're going to feel, and feel them powerfully.

Embrace the anger, sadness, acceptance and rejection. We're only human, after all. We're meant to emote and express and have feelings, so do just that.

And hey, look forward to the pint of Ben and Jerry's that will inevitably come during the sadness phase.