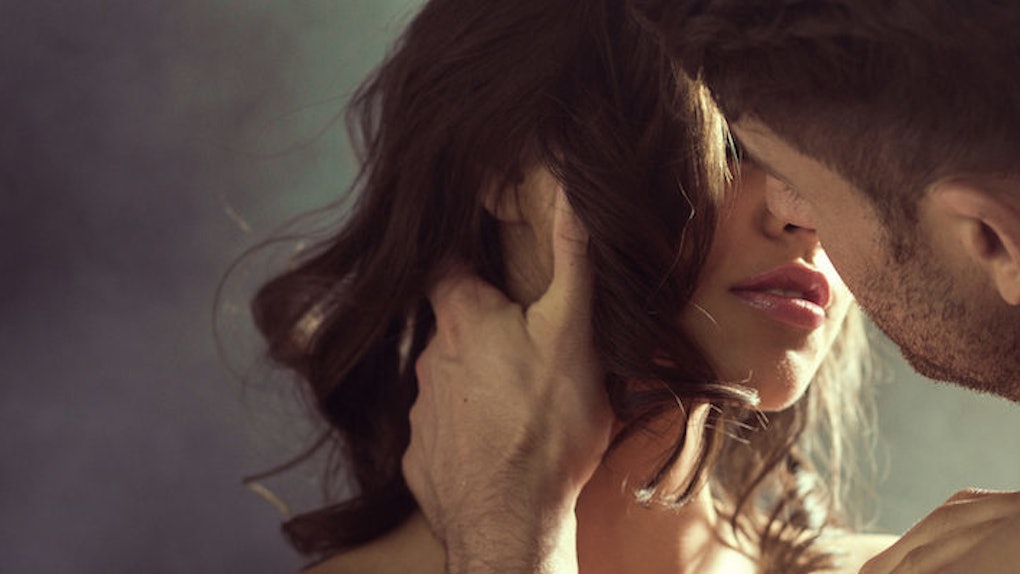 Not too long ago, I was hooking up with a guy when he suddenly grabbed my AA boobs and told me he loved my "huge tits." Then he started laughing hysterically.

And there it is -- my story. The thing is, for every straight woman, there’s at least one story about what some dipsh*t thought it would be okay to say to her in bed.

But sometimes these stories are so awkward and weird that we don’t feel comfortable talking about them with our friends. So I thought I’d create a space where girls could share their stories. And share they did.

Do yourself a favor. Take a look at these douchebag stories and remember that you aren't alone. And let's hope every single one of these idiot's contracts a disgusting (but maybe not life-threatening) STD.

When he made a weird comment about your body…

"You have huge arms."

"This would be so much easier if you were taller."

"I'm so glad you are thin. It makes everything...easier."

When you didn’t want to have sex with him…

He told me that if we didn't have sex, he would leave. We didn’t have sex. He left. At least he’s a man of his word?

He asked if the reason I wasn’t having sex with him was that I’m super religious.

When I said I don't want to have sex: "I'll just throw a condom on, and we'll see what happens."

I once trusted a guy enough to tell him I was a virgin, and he responded saying that means I'm going to be really sh*tty in bed when I do decide to have sex because I'm so inexperienced.

When he was just a giant d*ck…

"You're gonna hate me for this," -- right before he came all over my chest.

"That was the third best blow job I've ever received."

Went to a bar and got drunk with some friends. Brought a mutual friend home, and we started hooking up. After I finished him off, he put his hands over his eyes and let out the most stressed-sounding sigh I've ever heard and said, "My girlfriend can't find out about this." Ummm, I'm sorry. Have we been hooking up for the last three hours, and you failed to mention your girlfriend until just now?! He proceeded to lament the whole thing for about 15 minutes while I told him it would be okay, and we'd figure it out. Drunk enough to cheat, but sober enough to remember your girlfriend right after you finish? He wouldn't shut up, so I finally told him to shut up and get the hell out of my house. F*ck him for making me "the other girl."

This wasn’t something he said. But let’s just give a shoutout to every guy who casually (read: forcefully) pushed my head down mid-hookup so I would give him head.

When he was just kind of weird…

"Ok time to plug in!" Right as we were about to have sex.

I hooked up with a guy who told me his name was Robert. I later found out his name is Matt. And no, "Robert" is not a nickname he just goes by occasionally.

We were sitting on his bed, and a hookup was in the near future. He was talking to me about whether or not I considered myself to be a feminist. Then, without much warning, he started kissing my thighs. He looked up and said, "Oh, that wasn't very feminist of me." What?

When you guys were done having sex…

He suggested we go to a party after we had hooked up, and then he went to the party and left me.

"You're welcome." And it wasn't even good.

“That was the best sex I've ever had! I should have sex on acid more often!" Didn’t know he was on acid.

"That was pretty good."

A guy took something I said the wrong way, and he replied with, "Ya, well I had sex with another girl 12 hours ago."

I squirted for the first time ever while hooking up with a guy I was super into, and after we finished, he told me it was gross that I did that and that I was "cleaning up the mess!"

I once slept with the super-ripped guy who could have been a male stripper (well...maybe he was a male stripper). After we banged, he apologized for sweating on me. He then excused himself by saying, "Well... I did all the work anyway, so." What is there really left to say after that, except "Bye, bye!"?

As I was laying there naked next to my good friend (who recently turned into more than just a good friend), he asked me when I was going to get with his buddy Bryson. Bryson is his teammate on the basketball team. I asked him if it was a serious question, and he said, "Yes... Why, are you mad?" I got up, put all of my clothes back on, and walked out of the room without saying another word to him.

When he spit some mad game on you…

"I have my G-wagon in town." Not IN bed, but definitely his attempt to get me there.