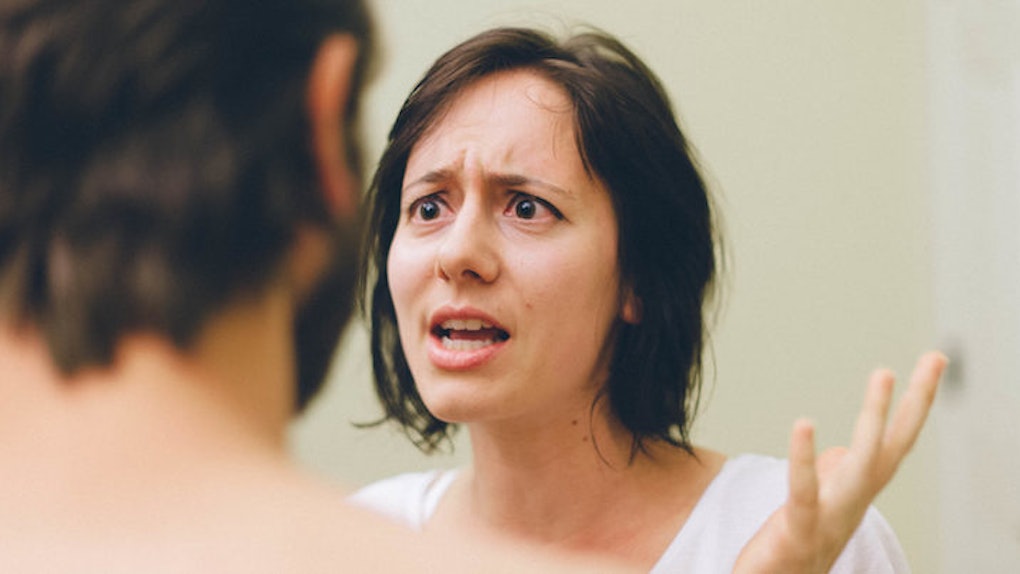 Don't Throw Cheese, And Other Tips On How To Fight Fairly With Your SO

I once saw my mother throw a piece of cheese at my father in an argument.

Flash forward to myself as a 28-year-old woman, and I threw a sandwich at the man I loved more than anyone.

Why? Because I'm a brat.

But also because I believe many of us millennials were raised to either yell and curse, or brush our problems under the rug.

We're missing skills in being an adult in adult relationships. Specifically, we don't know how to fight. Whether it be good, bad, ugly or fair, we've all had relationships in which we didn't, errr... fight the most maturely.

I'm not saying not to fight. You need to fight with your SO. Just fight fairly.

Here are five rules you should follow if you want to fix this problem.

Obviously, nobody wants to be called an arrogant asshole or a stuck-up bitch.

And if you meant it, you wouldn't be so in love with this arrogant asshole or that stick-up bitch anyway, right?

The blame game is for cowards and doesn't solve anything.

3. Apologize, but only if you mean it.

If you know you are in the wrong, apologize.

However, don't over-apologize. It takes two people to say you're sorry: One to say it, and one to accept it. If your lover cannot accept it, they may need more time, or they may not be ready to address the situation. It's ok to allow for time to feel the anger or sadness.

Take a deep breath and re-evaluate the fight.

Identify what the real issue is. There may be an underlying issue that you really need to step back and look for.

5. DON'T THROW A DAMN SANDWICH. OR CHEESE. OR GLASS. OR ANYTHING.

Learn from my lessons, babes. Just don't do it.

I recently discussed the topic of fighting with a close friend. Her parents' relationship was a fairy tale, whereas mine screamed at each other. While I learned to only fight dirty, she learned to only idealized her lovers. We're both single 29-year-old women.

I'm beginning to realize this lack of knowledge in being able to fight maturely has been a common flaw in every relationship I've had.

I'm beginning to understand that many of my relationships have been negatively effected by my inability to act and express my emotions calmly and respectfully. I'm also slowly teaching myself how to be a responsible lover (and fighter).

These simple steps seem like common sense, but in the heat of the moment can seem harder than putting a fitted sheet on your mattress.