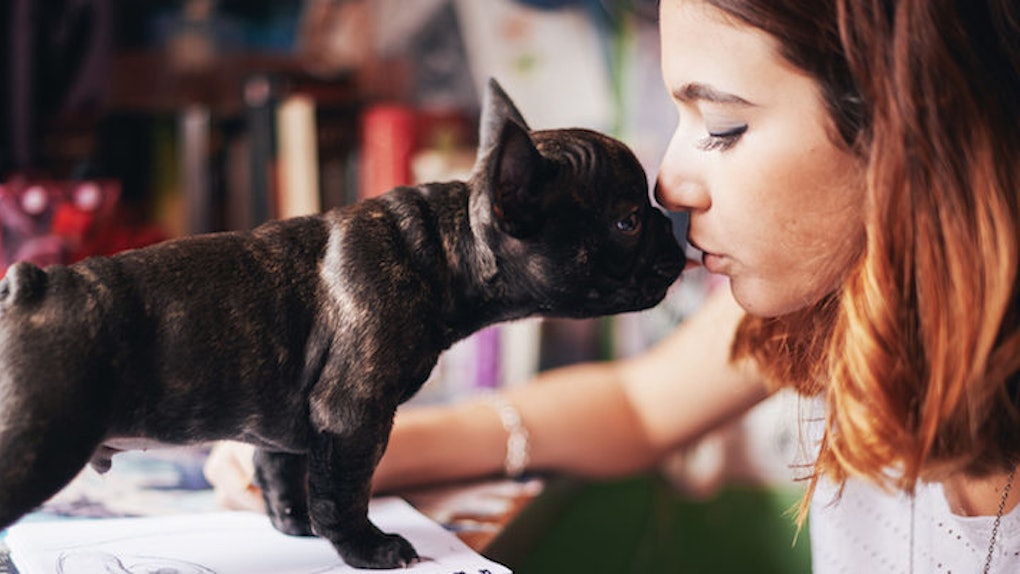 Why My First And Probably Best Boyfriend Was My Childhood Dog

When I was three, my mother got my sister and me a pup Maltese. She was fluffy, and white, and had a loving energy about her. When I pressed my hand up against her cage, she smushed her nose into my hand and pawed at me until I told the shop owner to open the door and let me hold her.

She and I immediately connected. It was love at first sniff. And she was so sweet that it only made sense to name her "Daisy."

Daisy and I watched each other grow.

My teen years proved to be incredibly difficult. My family moved around a lot, from one town to another, without considering my feelings on these life-altering decisions. I was also a drama geek whose school life was spent being shoved into lockers and having already-chewed food or paper airplanes thrown at me during lunch. The combination of those two hurdles made it practically impossible to make friends and keep them.

Oh, and the same went for boyfriends. I didn't have my first real boyfriend until well into my college years.

It took about 12 of the 15 years Daisy was alive to realize something: My dog was my surrogate boyfriend.

Yep. I'm not ashamed to admit it. We shared some good times, she and I, but it's more than that: She was always there for me, through thick and through thin. She knew me better than my friends, my therapist, hell, even my family. She was there when I needed a hug more than anything, and we loved each other unconditionally.

When Daisy saw me cry (which was a weekly occurrence, because of my aforementioned social outcast status), she'd walk over to the corner I was curled up in and lick the tears off my face.

Growing up, Daisy was the only constant force in my life, aside from my mother and sister. But as much as I loved my family, they didn't seem to understand me. I was the problem child; the artistic black sheep in a sea of straight-laced, post-graduate degree people whose idea of fun was stuffy dinner table talk about medicine.

I was the real-life version of Helga Pataki in "Hey Arnold." My closets were full of collages dedicated to the boys with whom I was in helpless, unrequited love. Yet boys were repulsed by my heinous braces and equally heinous frizzy hair. It was clear there'd be no love life in store for young Sheena. At least not with a human.

It's never been easy for me to open up to people, especially romantically. I suppose my misgivings might have something to do with the fact that my father abandoned my family and me when I was just a baby (well, that's what my therapist would say anyway).

With Daisy, though, it was different. I could open up to her knowing she'd have nothing but comfort and sweet nuzzles for me, and I'd reciprocate the feeling by sneaking her human food underneath the dinner table. I even talked to her in that annoyingly endearing baby voice, the way I'd see girls talk to their boyfriends on TV and in movies.

My relationship with my dog was the kind of relationship I always dreamed of having with a person. Instead of hitting up the football team's parties on Saturday nights, I'd curl up on the couch with Daisy and watch a never-ending stream of '90s rom-coms. It was the perfect modern fairytale.

Daisy couldn't abandon me. And even if she could, she wouldn't. She never judged me after a long, hard day of being at school. She never held a grudge against me for going too many hours without walking her. Our relationship was simple but meaningful, and I wouldn't have had it any other way.

Dogs can't hurt you. Their hearts are too full to do such a thing. And when the inevitable but horrible day came on which Daisy died, I cried, and I continued to cry for weeks. Part of my soul died, too.

My rock, my steady boyfriend, the one creature in the world who really saw me for me was suddenly gone forever. And somehow, I'd have to find a way to freely be myself with someone else, the same way I had been with Daisy.

I don't know if I'll never find someone who will understand me like Daisy did. The thought that I might not scares the sh*t out of me. It literally wakes me up in the middle of the night sometimes, and I have to cradle my teddy bear (another thing that can never abandon me), before I can get back to sleep. I know, I know. Issues, right? Hey, I warned you before.

At least I have the memory of my dog who loved me at the worst of my worst. And even though I'm only just beginning to finally have human boyfriends of my own (yes, real life ones), something tells me Daisy paved the way for me. She was the one helped me come into my own.