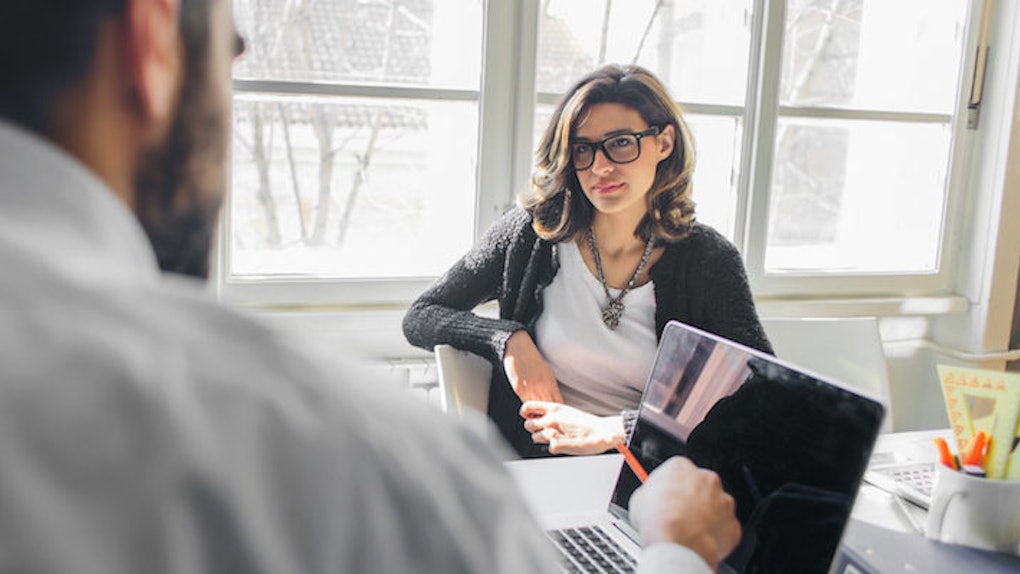 I'm A Woman And I Feel Judged By Female Therapists

“I just don’t know what he wants from me,” I said about the guy I was seeing, staring at my shoes. I found myself in the cold, dimly lit office of my psychologist at the time who, as much as I could tell she was trying her best not to, sounded nothing short of patronizing.

“Why are you doing this to yourself?” she sighed, answering not out of genuine concern, but seemingly out of frustration. Opening up to her felt like talking to my best girlfriend who figuratively slaps my hand every time I reach for the bad guy.

Seven years later, I arrived at the doorstep of a middle-aged, male therapist with the same crisis (yeah, I hadn't learned much in nearly a decade). His advice to me was simple, succinct and spot-on: "He doesn't like you."

Damn. Why hadn't I thought of that myself? Maybe I had or maybe friends had told me the same thing (OK, fine, they definitely had). The reality of it, though, was the same advice just never spoken to me in such a...blunt way.

I’ve been in therapy ever since I was an adolescent. Bullies put me through hell in middle school and high school, and intensive therapy was the only way to get through days of being called “Lenny Kravitz.” (I looked like Lenny Kravitz.)

But within the past 10 years, I’ve outgrown therapists as quickly as I outgrew my taste for kale (I can’t stress how quickly that happened). And all of those therapists I outgrew just so happened to be women.

For some reason, it’s always been easier for me to tell my problems to men. I suppose it’s because I feel like they sugarcoat things less. In my experience, they take declarations at face-value and don't skew them to mean something else entirely.

My first therapist was a woman in her mid-30s. Stationed on the Upper East Side of Manhattan, she was a hoity-toity kind of person who I could feel looking down on me from her pedestal of discretion and good choices.

My second therapist was also a woman, but she was a bit older. When I tried describing my love life to her -- a life ridden with flings, thanks to this generation's hook-up culture -- she didn't understand why I "settled" for casual sex instead of relationships.

My third therapist was so intimidating that I'd hide raunchy but significant details of my sex life from her so as not be judged in the same way therapists one and two judged me.

You'd think as a woman I'd have an easier time speaking with women. Men are seen as the more, er, detached gender. In my therapeutic experience, that means they come off as more objective.

They have a mathematical and calculative way about them, in which they can look at a problem and take the most cohesive steps to reaching the solution -- steps led by the head, not the heart. And they don't compare the trials and tribulations of their own lives to those of yours because they're incomparable.

It’s more than that, though. See, I had subconsciously hoped to foster a sort of mother-daughter relationship with one of my many female therapists. (My own mother was born in India, and there’s a huge generational and cultural gap between us.) I signed up for maternal vibes, and instead, I got silent stares, judge-y vibes and heads cocked to the side.

Look, I’m no mindreader, but I could have sworn these women were looking at me that way because the thoughts running through their minds were something like “That slut” or “That idiot” or “Does she not hear herself, or does she hear, but just not listen?”

Of course, the male tendency to stick to steadfast logic can definitely suck when it comes to open-ended, philosophical conversations about life and love. The thing about men is they tend to see the world in black and white, which is of no help to me when I'm casually looking to hash out my feelings about something.

But when I need a cut-and-dry fix for a crisis that can be averted, I prefer a man's input.