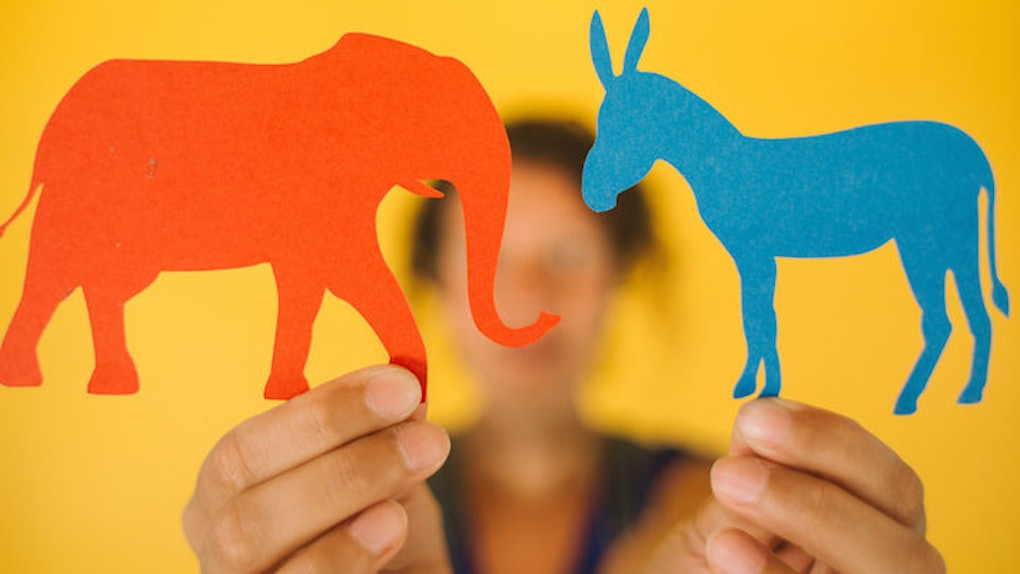 How To Avoid Resenting Your BF's Different Political Views

You and your boyfriend were snuggling on the couch with your eyes glued to the TV on election night.

But as it became more and more evident who was going to win, the two of you started moving farther and farther away from each other.

And then it happened. She lost, and your heart shattered.

Meanwhile, he was over the moon about the whole thing, Snapchatting all of his buddies in his "Make America Great Again" hat.

You always knew the two of you had some political differences, but now more than ever, it's starting to get pretty difficult to look past them.

How do you deal? How do you get through this? How do you stop resenting your boyfriend for his political beliefs? According to Dr. Michele Kerulis over at Counseling@Northwestern, it can be done. Here's how.

"Resentment is something that can build over time and can be diffused through open conversation," Dr. Kerulis says.

Resentment is something that can build over time and can be diffused through open conversation.

Personally, my MO in a tense situation like this would just be to avoid the topic all together (really healthy communication skills, I KNOW).

But you need to have a have a healthy, patient, honest dialogue with your partner. If you don't, you'll end up bottling up negative feelings that will turn into resentment toward them.

She says, "Try initiating a conversation with your partner by explaining why you were uncomfortable with the interaction and how it impacted you."

Let me put it this way: If resentment is a really bad rash, open conversation is Benadryl. And if you don't take the Benadryl ASAP, the rash is only going to get worse.

"Failure to communicate openly about the issue can lead to even deeper resentment," she warns.

Dr. Kerulis says there's a healthy way to have this very important conversation:

You can have a dialogue by listening to your partner's point of view without interrupting or judging. After each of you have had the opportunity to share your opinions, you can begin to work on understanding the rationale behind the other person's political positions.

Work on understanding the rationale behind the other person's political positions.

This is obviously easier said than done.

Any human being with opinions and feelings has been in a conversation where the other person's opinions were just so incredibly offensive and wrong, they couldn't help but burst into a blind rage.

And suddenly, your casual "healthy" conversation about your political views has turned into WWIII and you can't even look at each other.

Dr. Kerulis acknowledges this is normal, saying, "casual disagreements can escalate quickly when two people are passionate about their own points of view."

But there's a way to stop things from getting totally out of hand when you see this starting to happen.

She says, "If you feel as if a casual disagreement is escalating, take time to acknowledge that the conversation is getting out of hand and refocus on respectful communication."

If you don't want every little fight to turn into the end of the world, this is probably a good skill to get practicing ASAP.

How to know it's time to let go of a relationship

Now we have all these great communication skills and tricks, but is there a certain point where it just gets to be too much?

Like, is there ever a time when walking away from the relationship is just a better option than sitting down for another exhausting conversation?

According to Dr. Kerulis, there is. She says,

When conversations become disrespectful, one-sided or lack empathy it is time to reevaluate the match with your partner. It is possible that your views are so different that continuing a relationship could become very difficult.

When conversations become disrespectful, one-sided or lack empathy it is time to reevaluate.

Obviously, before you rush to end things, give talking things out another shot.

Dr. Kerulis encourages you to "talk with your partner about your differences" if your disagreements about political views seem to be escalating.

But, if your conversations are consistently starting to feel more toxic and less healthy, it could just be time to call it quits.

Sometimes the fight just isn't worth it.