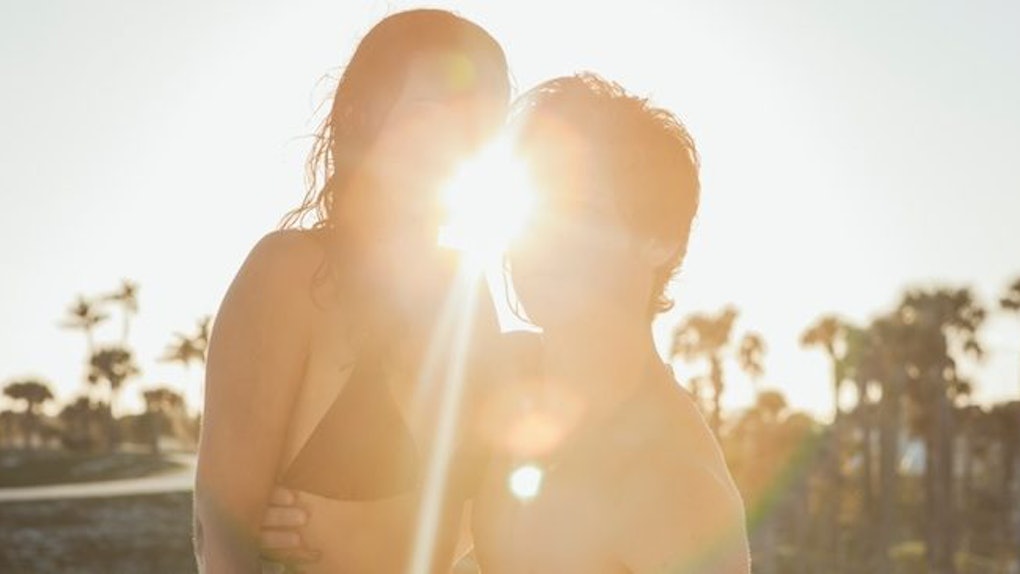 Why Date Someone You're Not Going To Marry? 3 Reasons It's Totally OK

Years ago, when I was still in a relationship with a man, I went to visit one of my cousins. She is older, married, and has lots of babies. I remember sitting in her backyard, talking to her about my relationship, and telling her that I didn't think I wanted to marry my boyfriend. "Why date someone if you're not going to get married?" she asked me. "Might as well break up now." At the time, I gave her words way too much weight. If I could give my younger self a piece of advice, I'd say that it's fine to be dating someone you're not going to marry.

Even if you totally subscribe to heteronormativity and believe that marriage is the ultimate judgment of whether or not a relationship is successful, it's OK to date people knowing that's not where you are headed. Relationships of all kinds are legitimate, whether or not you've got a license for it and whether or not you plan on being together forever. Plenty of marriages exist between people who don't love one another, who violate the terms of their agreement, or who even abuse one another. Whether or not you're married proves nothing about the health of your relationship. Here are some other reasons why it's totally OK to date someone you're not going to marry, and thinking otherwise is pretty much ridiculous:

1. Dating Teaches You What You Actually Want In A Relationship

My first two relationships were total screwups, and I was never going to marry either of them. If I had dated them with that intention, I might have talked myself into doing something that wouldn't have actually been what I wanted.

Presumably, if you are looking to get married, then you specifically want to get married to someone you are compatible with. The only way you figure out whom you are compatible with is to try out different people. Don't underestimate the power of having some experimental relationships to figure out what is most important to you in a relationship. It probably won't be what you expected.

I used to think that I would end up with another writer. After dating two of them, I realize this is not a prerequisite. I've been way happier with creative people who aren't in the same discipline I am. We give each other ideas, but I'm not in competition with them, and they're not giving me any advice I wouldn't take without a grain of salt.

That's just one example of something I thought I wanted, but actually didn't work for me. If you enter a relationship thinking that marriage is the only possible good thing you might get out of it, then you are limiting your options and missing out on all the beautiful and important lessons that love can leave you, even if a relationship isn't built to last.

2. Marriage Is About Property, Not Love

Marriage is more about property, alliances, and money than it is about love. Need proof? Think about the history of fathers selling off their daughters in exchange for livestock — which, by the way, still happens. Marriage began as a way to strengthen family bonds and political alliances and acquire more property. That's more or less what it still is. It's easier to apply for a loan if you are married and have two sources of income. It's easier to adopt a child or have a baby in the hospital if you can put your spouse as "next of kin" on the paperwork. When you're married, you can file a joint income tax, which frees you up to put away thousands of dollars for retirement.

The fact that marriage gives you, as a couple, more respect in society is entirely arbitrary. It has nothing to do with you finding love, and everything to do with money. Families also treat married partners with more respect, while simultaneously and subtly shaming single or queer folks. I'm unmarried and get treated completely differently than my married sister. To add insult to injury, my family doesn't recognize my queer relationships. My brother-in-law is invited to every gathering and vacation. The difference is that he and my sister live together and have a piece of paper. It's not about love.

If I dream about getting married, it's basically because of the tax purposes and multiple incomes. Honestly, I'll have a hard time choosing to benefit from that privilege, having known the discrimination that unmarried people face from their own families.

Every time one of my friends tells me that their partner has proposed, that they have talked about when they are going to propose, or that they are thinking of proposing to their partner, I gently ask them whether they really want to get married. If marriage is your ultimate reason for being in a relationship, you may be rushing into something that you're not ready for.

I didn't used to worry. I trusted that my friends knew what they wanted. But after seeing friends get depressed after getting married, and especially after dating a few different divorced folks, anytime I hear that someone is planning on getting hitched before turning 30, I raise an eyebrow.

Basically, in my experience, I witnessed young divorcees either throw themselves at new, toxic relationships out of a sense of codependency, or eschew love altogether and be extremely withholding with people they were dating. Obviously, there are no binaries in life, and not everybody fits into these two categories. But I do have serious concerns that my friends who get married young will end up in the same boat. These divorcees loved their partners, were stable in their relationships, and the reason the marriage ended was that they simply drifted apart. Both were as clean of an ending to a marriage as could be anticipated, and they both had serious repercussions.

And although they said that getting divorced was just like a breakup with more paperwork, it really wasn't. Marriage is afforded a different, more privileged place in society than a couple who is simply living together. It's a contract that holds weight, no matter how much you want to minimize it. And when that contract is broken, there are serious emotional repercussions.