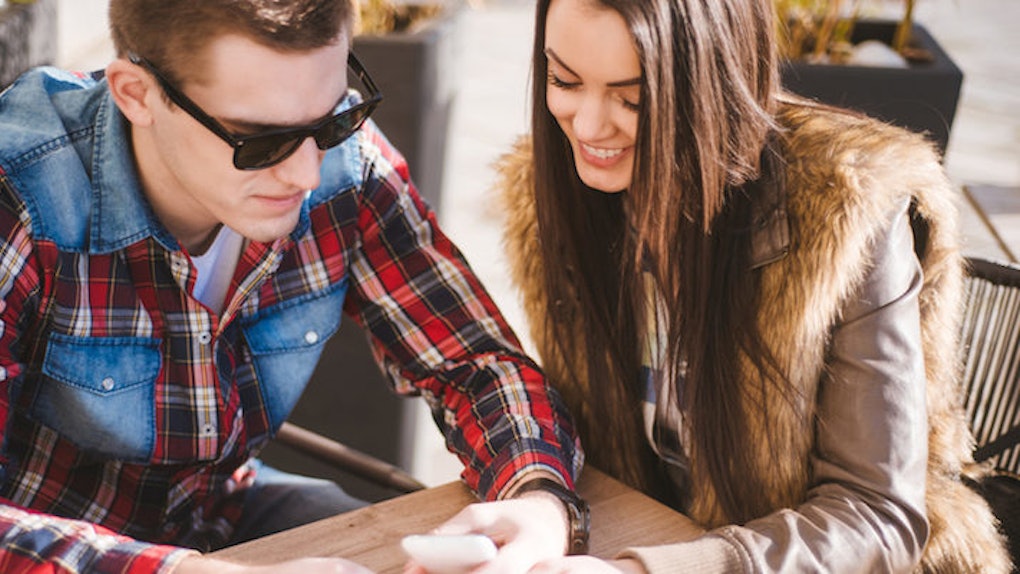 Dating App Swap: I Swiped For Him, He Swiped For Me, And It Was Horrible

Have I ever mentioned how much I hate those three little words? No? Well, I despise them with every fiber of my being.

Don't get me wrong: If they're said with a hint of spunk IRL, they're not completely hopeless. But if they're used as a conversation starter over a dating app, you can bet I'm going to swipe the f*ck left and unapologetically ghost that person.

Ah, dating apps. They're hardly anything more than a clusterf*ck of poorly worded responses and badly taken photos, of socially inept weirdos and ill-intentioned f*ckboys.

If I haven't made it clear yet, I'm not a fan of swiping on that sh*t.

Our results were interesting. And unfortunately for both of us, it wasn't exactly love at first swipe.

Pretending to be a guy made me feel proud to be a girl.

Girls on dating apps are colorful, quirky and active listeners. They are genuinely interested in talking to you and hearing about things like what you like to do for fun and what got you to what you do professionally.

At the end of the day, it was definitely easier to pretend to be a guy than it was to be myself. Wooing a girl is simple: just be sensitive, smart and personalized with your message, and you've got a guaranteed in.

The guys Kevin swiped for me were sexy, but moronic.

After I was done swiping for Kevin, I was eager to see who Kevin chose for me. When I perused the matched profiles, Kevin seemed to know what to say to impress the men; he utilized a sort of immature, boyish, light-hearted humor to appeal to their pea-sized brains. And he landed me some hot, stupid men.

Look, none of them were Brad Pitt, but they were pretty high up there on the scale of “I'd only bang you if I was plastered” to "You're so hot that I'd bang you even if you had Lupus.”

Take this professional soccer coach, for example, whose flawless body you can use your imagination picturing from the colorful message Kevin sent him:

But he gave Kevin nothing to work with. He had the personality of a doorknob.

Unfortunately, for me -- and for these men -- what they possessed in the looks department, they severely lacked in the personality department.

When I read Kevin's conversations with them, they were void of wit, sense of humor and general self-awareness. They all seemed to be reincarnations of the same archetype: the boring-as-f*ck finance bro whose most enlightening experience to-date was a night out doing high-end cocaine in a bathroom with his fellow bros.

The men weren't receptive to the articulate (and comical, if you ask me) messages Kevin sent them. Take Whopper, for example:

Whopper here doesn't quite swallow sarcasm the way he does his steroid pills. He could have just as easily gone along with my joke, but instead, he corked Kevin's humor faster than one corks an expensive bottle of red wine after popping it open. Whopper, you bastard.

Then, there was Dan, who left Kevin with a non-open-ended response. The man worked for the Hilary campaign, and yet he couldn't figure out how to keep a conversational flow.

Plus, as meatless and un-profound as the messages were, they were also apparently on the last bus out of Penn Station. While reading Kevin's messages with these guys, I saw they took forever to respond.

You'd think the fact that they weren't modern-day Hemingways would, at the very least, warrant quick response times. But no. I saw that they kept Kevin waiting a solid day, on average, for lackluster messages. Go figure.

I wouldn't date any of the boys Kevin chose for me.

When it comes down to it, I wouldn't go on a date with any of the men Kevin picked for me.

I could barely tell one apart from the other, and though they were juicy packages of man-meat to stare at, I would probably have run out of things to say to them within the first 30 seconds of meeting them.

They were more, er, one-night-stand material, if you know what I mean. Just ask Cody, who not only led on he was interested in more than sex, but was also phenomenal at keeping Kevin stimulated with conversation:

Upon closer inspection of these guys' bios and after reading Kevin's conversations with them, I realized just how sucky they were at life.

But I can't blame Kevin. When he picks up women for himself, he weighs a girl's physical appearance much more than her personality, and that ultimately affected the way that he swiped for me: He chose men who he thought were good looking, but perhaps lacked in the interesting or personality department.

I, on the other hand, take a guy's personality much more into account than I do his looks. So when I was swiping for Kevin, I spent a lot of time looking at a girl's profile and picking things to talk about that were specific to her.

I was excited about the girls I swiped for Kevin. I genuinely could see myself being friends with these girls, which is why I chose them. And I could see them clicking with Kevin on an intellectual level.

Pretending to be a girl chasing guys was exhausting.

First off, if I have to swipe right on one more carbon copy, finance-job-having f*ckboy, I'm going to lose it. All the former frat boys I swiped for my dear friend and co-worker, Sheena (who's single, by the way! Very, very single) quickly blurred into one, boring, average-minded mega f*ckboy in my mind.

For the sake of all women, I hope guys are more interesting IRL than the conversationally impaired men I had the misfortune of swiping right for Sheena.

On the upside, however, after having conversations with men for Sheena, my self-esteem got a nice boost. I at least try to be a little clever and funny on and off Tinder, and I must be a catch for anyone who swipes me, seeing as how I'm competing with men whose best shots at conversation range from “Hey, what's up?” to “When we meetin'?”

The girls Sheena swiped for me were interesting, but I didn't find them attractive.

I was excited to see who Sheena had swiped for me. I knew she had a bit of a learning curve to navigate at first when it came to hitting on her fellow females, but she promptly figured out what worked and what didn't.

And once she did, she scored me some super interesting, artsy, unique chicks… if only I found them physically attractive.

I love me a girl with a little edge, a little attitude, a little something that makes her HER. No two girls were the same. I could decipher between each one clearly -- and so could Sheena.

Look how hilarious Rachel was. This girl knew how to carry a convo, despite poor Sheena's complete and utter lack of game:

But she, and most of the others, didn't do it for me physically.

Rebecca's* profile, for example, said she had an adorable affinity for prime cuts of meat, but I wouldn't let her go anywhere near MY (Sheena's) prime cut of meat.

I also saw that all the women were prompt responders and happy to carry the conversation.

In some instances, when I was talking to guys for Sheena, I had to wait a day or two to carry out a full conversation with a guy. Many men sent me one, maybe two messages a day.

Sheena, on the other hand, was typing away on my phone, talking to women multiple times a day. Most of them were happy to “double text” if it meant keeping the conversation with Sheena going.

Even when, at one point, fellow female co-worker/hilarious person, Candice, got a hold of my phone and opened with an…interesting…line, the woman still responded.

In Candice's defense, Heather* DID say she was an artist in her bio…

I have to give a hard “no” to dating any of the girls Sheena picked for me -- except maybe Emma because she was British.

All in all, the experiment was a double-sided failure. Personality wise, these women foot the bill, but how could a potential romance blossom without sexual attraction?

No matter how hard we tried to guess what the other would want, we couldn't separate ourselves from our gender differences when swiping right. And as a result, I got a bunch of great women who I wasn't physically attracted to, and Sheena got a bunch of dimwitted f*ckboys void of a personality.

What did I learn? Guys are boring as f*ck. And if you are a guy, and you see a girl walking into a bar or sitting pretty on Tinder and think “Wow, she can get a guy who is way hotter than me,” think again -- because she's probably sitting there dying for someone to talk to.