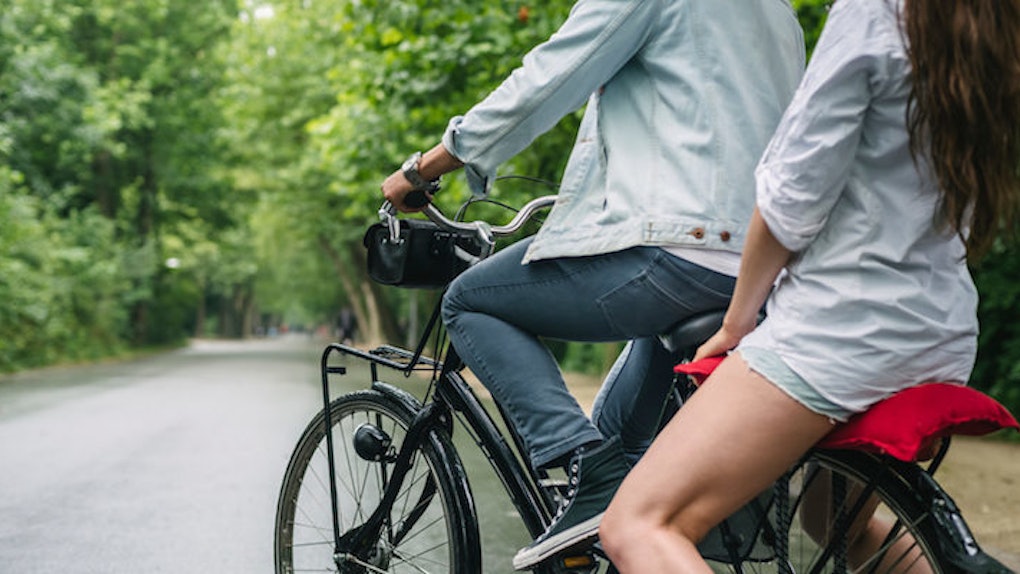 5 Dating Anxieties You Have When You Don't Date Much

It's no secret that dating can be tough, especially if you've never dated before… like me.

So I'm going through the things that riddle me with anxiety and keep me up at night about dating. Won't you join me?

Seriously, that's like DEFCON 5! I know how the game is played. I saw "Meet the Parents." One minute I'm fine, and the next, I'm being interrogated by my girlfriend's FBI agent dad… or was he in the CIA? Whatever, he could be in the NBA for all I care, it's still stressful!

The closest thing I've come to meeting parents was back when I taught history and did parent-teacher conferences. Unless my boo bear has reading comprehension problems, those skills are not transferable.

When you spend as much time alone as I do, you realize you're not used to doing things with an audience -- like sneezing, laughing and eating.

Now I'm no slob, but I have left the occasional stain or two. Eating in front of a potential love interest might prove problematic. What if I drop something? What if I spill something?

That's why I've devised a plan to combat this. I will only take dates out for spill friendly food alternatives, like pizza. Pizza is great; it's hard to spill that. But what if she doesn't like pizza??? Then she wasn't the girl for me.

I have few dating preferences, but a love of pizza is one. Because as we all know, pizza is love.

It's no secret that dating often leads to relationships, and relationships definitely lead to social media. Despite my perpetual solitude, I'm a romantic.

In fact, I'm too much of a romantic. You would think three decades of being single would have calcified my heart, but the truth is, I have so much love give. I'm afraid I'll forget to pace myself and let it all hang out.

I might become that mushy over sharing boyfriend we all know and hate. The ones who start every post with, “I normally don't get mushy...” Yes you do! That's the sole purpose! To get mushy! And that's exactly what I'd do.

I'd compare her hair to the golden rays of sunshine — even if she isn't blonde. Why? because I'm dramatic, that's why. And that's social media's cardinal sin against humanity: giving dramatic people a platform.

But, such is life.

Taking pictures is the bane of my existence. And despite our selfie-obsessed culture, I'm sure many of you feel the same way. I'm not the most photogenic of guys, so the possibility of having to take a picture during a date sends chills down my spine.

Do I smile or do I just smirk? Do I put my hand over her shoulder? How do I tilt my head? Does my head look fat? What do I do? Answer me!

There are just so many variables… too many. I think I was meant to date before the camera's invention. When it comes to taking pictures, I'm just not about that life.

As we've seen, dating can lead to relationships, food stains and selfies.

But there's one thing that we all hope it leads to: sex. That's right, at the heart of nearly ever date invitation and acceptance is the hope that carnal relations might ensue.

The prospect of sex would delight most, but if any of my articles show… I'm not like most. Not to get too graphic, but I'm in what you call a dry spell.

It's been so long since I've gotten down and dirty, I forget the year. It was either during President Obama's first term or President Bush's last… (not kidding). The bottom line is this: I'm rusty.

There's no substitute for experience… and that's my biggest fear. Let's say I'm on a date, and with luck and gumption, I'm smoother than pressed silk. I get invited up to her place and BAM! Whack sex! I know it's not the end of the world, but to guys, it's the end of the world.

So those are just five things that worry me about dating. I know it may seem like these concerns of mine are a bit out there, but like Eminem told us long ago, I'm sure there's a million of us just like me.

And if you're one, know this: It's going to be alright.