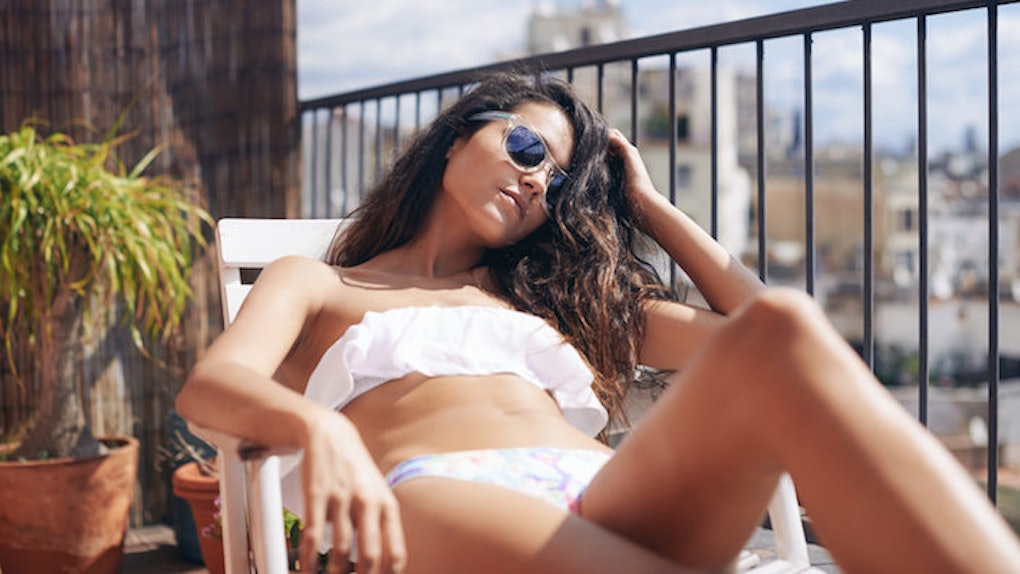 No Chill: Why Being 'Chill' For The Guys Isn't What Every Girl Wants

Whether you specifically have been deemed the elusive title of "chill," wished you could some how posses the persona or have just heard the phrase “she’s so chill” tossed around as a complimentary description, we all know who the chill girl is.

Let’s call her Lady Chill or LC. LC is the girl who shows up late to a pregame, looks the best but clearly wasn’t taking the extra time primping.

She wears jeans that hug her ass criminally well and a perfectly faded ripped crew neck T-shirt (either from too many stints in the laundry or, more likely, from effortlessly cool T-shirt heaven).

LC has many friends, or rather, many people who want her around.

She can sit on the couch with a bunch of guys, smoke hooka wearing a sweatshirt and talk about podcasts or how she really doesn’t think its necessary to be clean-shaven “down there.”

The guys love her because she’s an open book of funny anecdotes and laid-back sass. She’s pretty to look at, and she exudes an aura of subtle sexuality.

As a lady who has been called chill too many times to count, let me tell you, the title isn’t as great as it has been chalked up to be.

LC is comfortable with her sexuality, and she isn't fazed by compliments. Her candor in conversations surrounding hook-up culture are often misconstrued as being open to the sexual whims of her male friends.

There is a negative domino effect of being chill that most people are unaware of.

LC will stay an extra night in Fire Island and end up sharing a bed with a guy, all while being able to maintain a normal heart rate. The bed is small, and the empty beds are limited. The guy insists they should spoon in order to preserve space.

One thing leads to another, and spooning inevitably transitions into lying face-to-face with legs intertwined. The two lie awake stealing kisses while friends sleep just a few feet away.

LC lives for the experience and because of this, she winds up with an exorbitant amount of kisses under her belt that don't amount to anything at all. Stereotypically, the chill girl shouldn’t care, but deep down, she does.

A friend of mine (also an LC) was telling me about a guy she has been hooking up with for the past few months.

“Why are you guys messaging through Snapchat?” I asked. She explained to me they don’t text. To clarify, he doesn’t text her. The last text he had sent her using iMessage was two weeks ago, with many sleepovers in-between.

She voiced her frustration over his utter lack of normalcy. They had never been out on a date, she explained. Though formal dates between hook-up buddies might not be common practice, I was still surprised.

Slightly worried about the response, I asked, “You guys have gotten breakfast together though, right?” She laughed and confessed they had never done anything together aside from spend nights at his apartment.

I was enraged by the way my beloved LC friend was being treated. Granted, this guy is off. He’s 25 and had confessed he hadn’t had a sober hookup in three years. He genuinely might not know the minimal amount of etiquette casual hookups require.

I hate to say it, but the perpetuation of his bad behavior laid on the shoulders of my LC friend. She was allowing it to happen.

She answered his 4 am "come over" texts. She’d slip on her high-top Adidas sneakers, do a quick nether region shave and shell out the $9 for a cab ride to his apartment.

I asked her why she even bothered with this guy. She told me she really doesn’t care because she isn’t looking for anything serious right now.

Having been fortunate enough to experience various relationships, casual and serious, I have come to a conclusion on how to appropriately be the LC in a group.

Saying no despite your chillness is of prime importance. But, it can be hard.

Who doesn’t want to be kissed under the blankets during a weekend getaway with friends? Any girl would love that, but not so many girls would let it happen without the affirmation there are also feelings involved.

What the LC doesn’t realize is she is screwing herself. She thinks she doesn’t care, until all of a sudden, she does.

By then, it is already too late. She’s been categorized as the girl who is okay with spontaneous fun, but she is not the girl for a date of stomach-butterfly-inducing moments.

The worst fear for an LC is losing her title. For some reason, being an LC has become synonymous with being down for casual hookups, too.

“You’re the chillest,” my Fire Island bedmate said from the window of his car as he drove away. He might as well have said, “Don’t expect me to text you.” We both were well aware of that.

As I walked into my house, I felt an unfamiliar feeling in my chest, a pain that was self-inflicted and absolutely avoidable.