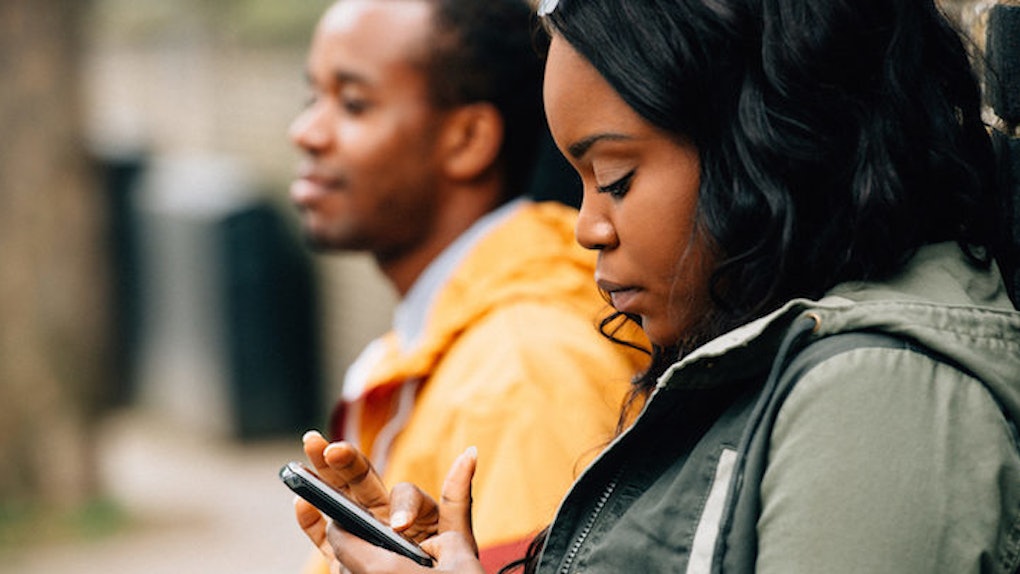 11 Reasons He's Not Calling Back, And Why It's Not The End Of The World

Ladies, have you ever been out on a first date with a guy and thought you had such a nice time together?

You felt the conversation was easy. You both laughed and got on really well together.

Sure, it was just the beginning. But what a great start.

But then, he just never calls.

Although you may never understand what was actually going on in his head, here are 11 reasons he didn't call:

1. Something or someone else is going on in his life.

Maybe this guy has not been totally upfront with you.

Maybe he has been on a few dates this week, and has met someone else in the meantime.

Maybe he has something else going on in his life with work or family, and it's just not allowing him to make room for dating right now.

We all know how distracting life can be.

We all get busy, and sometimes, your date gets caught up in his own life and forgets to call you back.

Advice: Don't take it personally. Chances are, he's not messing with you.

Try to accept that he has too much going on in his life right now, and it's stopping him from dating.

Don't allow it to dent your self-confidence and make you fearful of going on future dates.

Don't allow your mindset to believe all guys are players.

Simply ask your next date if he's seeing anyone else at the moment, or if he has room in his life for dating.

If a guy thinks you're not interested in him, he will be reluctant to call you back for fear of you rejecting him.

However, he may call you eventually, once he has plucked up the courage to do so. Advice: If you like this guy, don't be afraid to show it.

Maybe this guy is just looking for a fun time, but you have given him signals that you want something more.

This guy has already moved on.

Advice: He is of no worth to you right now. He's moved on, so let him go.

4. He didn't feel the mystery or challenge.

Did you spend the evening telling him your life story?

No guy wants to know everything about you on the first date.

He doesn't need to know your mom has been divorced three times, that your dog has a personality disorder and so on.

Keep the first date to talk about your interests in life, your passions and your hobbies.

For example, if you love music, talk about it. Mention the last concert you went to.

Whatever it is, keep it fun and light.

We all love to laugh.

We all love to escape the humdrum of life, so make yourself your date's escapism for the evening.

Make him want that second date.

If you tell him your life story, then where's the element of mystery? Where's the challenge of getting to know you more?

You also don't have to agree with everything he says. Challenge his viewpoints every now and again, in a friendly, non-confrontational way.

Nothing will make him run faster than constantly picking a fight.

Advice: Be playful, fun and interesting. Don't be afraid to disagree with him every now and then.

Be a challenge, but charming at the same time.

5. He was just being polite.

It's hard to tell someone at the end of a nice evening that you enjoyed his or her company, but you don't feel a romantic connection.

So you exchange numbers with no intention of making contact again because you feel it's easier than being totally honest.

You don't really want to hurt that person's feelings.

While it would be nice to just say, "I have enjoyed your company, but don't think I want to take it any further," we often don't.

Men are no different.

Advice: That's life sometimes. Just move on and find "the one."

6. He thinks you're just not for him.

Maybe he felt you came across a little needy or too eager for him.

Advice: Try not to make too much of him getting in touch with you again.

Try and have the mindset that if he gets back in touch again, great. But if not, that's fine too.

At least you got to spend the evening with someone really nice.

Neediness is really scary for men.

But hey, it's really scary for women, too.

No one wants to feel like he or she is on a date with a potential stalker.

So don't say things at the end of the evening like, "When can I expect your call?"

Think about how you would feel if you went on a first date with a guy and he called you constantly afterward, telling you you are too good for him and he can't believe his luck that he got to go on a date with you.

You have no respect for him, right?

So don't be that person either. It's an instant attraction killer.

Keep the conversation light and fun. Remember your body language, and use it to the max.

Use plenty of eye contact and plenty of laughter, and make him your focus for the evening.

This is a tricky one.

Should you sleep with him right away? Look, this is the day and age for equal rights for women.

Women can have no-strings-attached sex, and I am so glad for that.

If you want to sleep with this guy on your first date, then go for it, girl.

Advice: I think the decision to sleep with him should come with some provisos as follows:

You are completely sure it is you who wants to sleep with him, and you don't feel coerced to somehow cement the relationship quickly. You are totally OK with the fact that if you sleep with him tonight, you may not see him again because the cold, hard truth here is he now doesn't have to do anything further. If you answer a resounding "yes" to both, then go for it.

In short, there is no right or wrong answer to this one. You are going to have to trust your own feelings here.

8. He forgot or lost your number.

Men are human, and can be careless sometimes.

Maybe the true reason he has not called you back is the fact that he has simply lost or forgotten your number.

Advice: Like in point number five, that's life sometimes. Just move on and find "the one."

9. Did you disrespect him?

This is an important one. Just because men are less forward in expressing their emotions than women, it doesn't mean their feelings can't get hurt as easily.

Try to avoid making personal, unfavorable comments about what your date is wearing, his haircut or his chosen lifestyle.

Lets face it: That would be rude, and you are a lady.

Advice: Men -- just like women -- want to be shown respect and a certain amount of admiration.

So don't give him hurtful personal comments at this stage, and don't try to change him into the fashion icon you want him to become.

He may have terrible taste in shirts, but for all you know, he may have scaled Everest five times. Show him the respect he deserves.

I don't mean this disrespectfully, but guys are simple creatures.

They are wonderfully simple. They're so simple, it's adorable. I, for one, am delighted about that.

But some of the little things us girls do can be a red light for them.

When you're on a date with a guy, be attentive. Use your body language to its fullest to show him you're totally engaged with him.

Also don't text your friends every second of the date. Save that for after the date.

Do not be unkind or sarcastic to waitresses, bar staff or even your date.

It's not good manners.

Advice: Give him your full attention, and make him feel like he's the only guy in the world. Show him how elegant and classy you really are.

11. I know you're nervous, but watch your Dutch courage.

We all get nervous on the first date.

So you can expect that he will be, and of course, you will be too.

Don't be tempted to weaken your nerves with a drink.

What could be more off-putting on a first date than being in the company of someone who is slumped down on his or her chair, slurring words?

It's not likely this behavior will land you a second date.

Believe me: Your date will be after a mature and sensible woman who can handle her drink. If she can't, she would be wise enough to stick to club soda.

Advice: If you are quickly affected by alcoholic drinks, save them for a raucous night out with the girls.

If he doesn't call you back, chances are, it's not all about you.

Reassess your dating personality and tweak these traits according to these golden rules if you feel it's necessary.

Don't ever be needy, and always, always be powerful.

Compatibility is very important. Your relationship success with a guy depends on this one sole factor.

If you're compatible, he could be your soulmate. If you're not, forget him.

He just made room for the right guy.