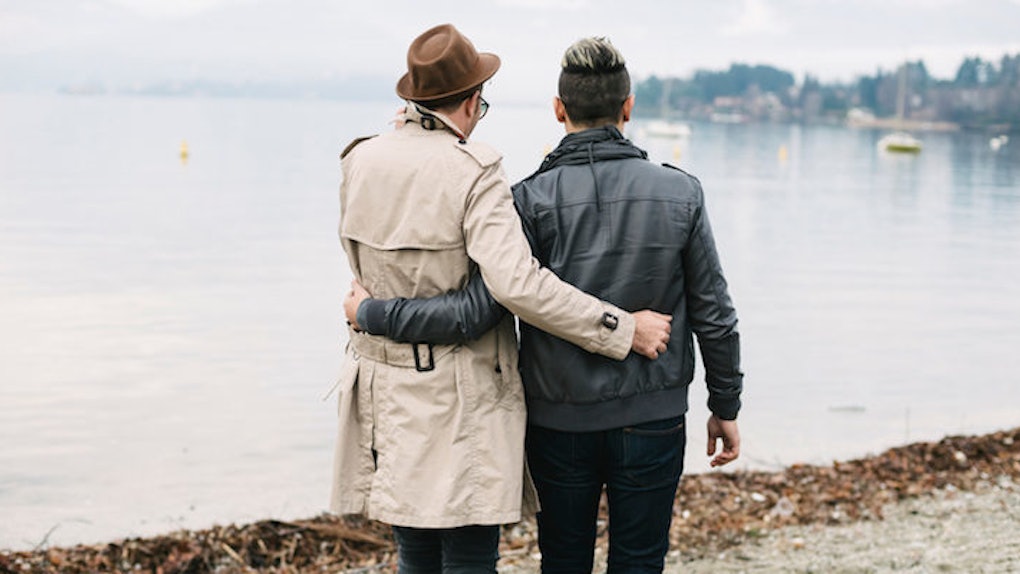 I'm sure all of us have thought about our boyfriend's previous sex partners at one time or another. The curiosity is normal. Are we satisfying him the same way that X or Y did? And how about Z? Did they sleep together or was it just a few dates? Our minds can go on and on, especially if we tend to be insecure about ourselves.

But it's certainly one thing for a boyfriend to have a past that's actually left in the past and another for that past to be forever loitering in the wings. What I am referring to is when one-night stands and former flings become friends, purely just friends, but the past and how they met is still firmly etched in the history books.

If I discovered early on or even later in to the relationship that my boyfriend once had sexual relations with a friend, one whom he still speaks to and socializes with on a regular basis, then I would not put myself and my emotions through that tangled and complex scenario.

How do you operate daily life knowing full well that someone your boyfriend has slept with in the past is a contact on WhatsApp, a Facebook friend and someone they go out drinking and socializing with? No, not on my watch, not while you are my boyfriend.

So what is acceptable and what is not when it comes to the boundaries of a past "intimate" relationship? Well for me, all kinds of physical interactions are a no, even if it was simply just a one-off drunken kiss. My boyfriend should not have had any touchy-feely moments with any of his friends, let alone dated or been in a relationship with them. This is simply not acceptable.

History or not, I don't want to be in a relationship with someone who still sees people he has slept with in the past, regardless if they are just friends or not.

Imagine having a casual coffee with your boyfriend and his "friend" knowing full well that once upon a time they were in the throes of sexual ecstasy. How am I supposed to drink my coffee in peace as I sit here awkwardly knowing that the friend, currently touching my boyfriend's shoulder as they recall a joke, has actually seen and touched his private parts?

This friend has seen my boyfriend naked, he has shared the same bed as him, they have shared saliva and a whole host of other things, they have been intimate, they have been closely acquainted and even if it was just sex, the fact of the matter remains, this "friend" has had my boyfriend inside of him. It's a thought that makes me want to spit out my coffee in a jealous and insecure rage.

Why does the thought of a boyfriend's past life keep you up at night, anxiously tossing and turning in bed? Insecurity is no fun. It's that nagging feeling of angst and anxiety, of being unsettled and worried. You feel helpless and that you don't measure up to a person or situation or in this case, the people he has previously been with. Whatever it was just sex or a passionate relationship, either way they were intimate and that makes your skin crawl with jealously.

It's that feeling of inadequacy, left to feel insufficient as the constant reminder of what once made your boyfriend aroused lingers in the shadows, like a ghost of your boyfriend's past but refusing to die and go away in peace.

Why are they still hanging around? Yes, they may have had a fling in the past and decided they were better off as friends, but does that mean I need to condone this kind of friendship? Absolutely not, and I won't. Friends are just friends for a reason. I do not sleep with my friends because they are merely just that -- friends.

If I had slept with someone in the past and discovered we were better off as friends and a boyfriend was unhappy with the situation, then that friendship would have to end, because I respect my boyfriend's feelings and value our relationship more than a friendship with a one night stand that occurred years ago.

So I hope when I finally do meet Mr. Right, I hope he has no complex intimate friendships of past sexual encounters. I want to have dinner and socialize with his circle of friends and not worry when I look around the table that they have slept with my boyfriend, as they give each other that knowing eye.