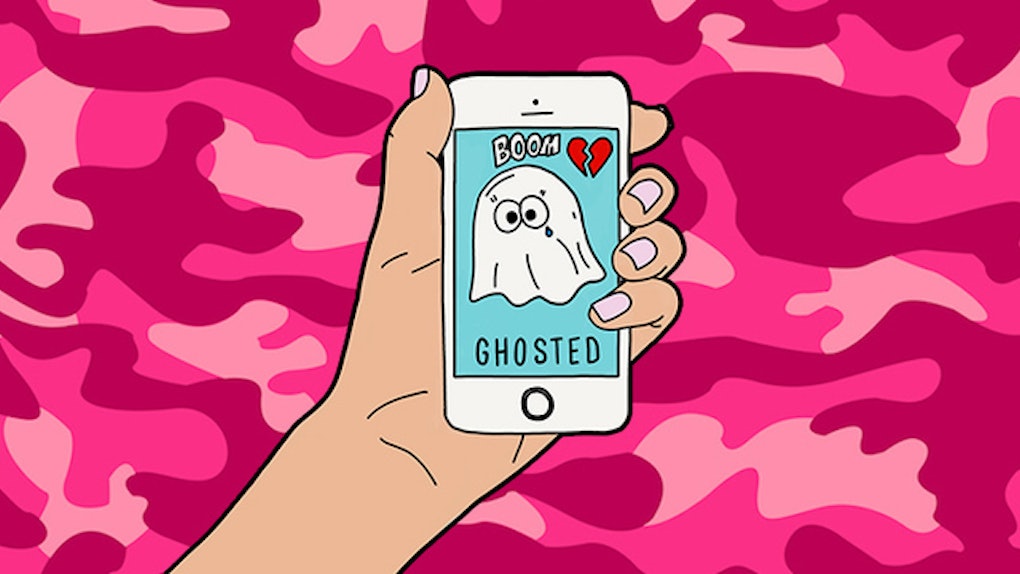 This Soldier Was Ghosted After Coming Home From Deployment

This week we have Jackie*, a soldier who was ghosted by the guy she loved. Read her story for yourself here:

I am in the military. And from the beginning of my military schooling, I knew I was going to be deployed. But I met this guy, and we hit it off. I should have realized the small red flags, but after a battle of back and forth, we finally found ourselves together and saying 'I love you.' That is a huge step for me. I've only said that once before, and that was in an abusive relationship. We were long distance, but I was already planning on moving out to the east coast to be closer to him. Everything was going great. We messaged every night, and talked all the time either via FaceTime or a phone call. He had me out to visit, and he even cancelled plans with his friends last-minute to fly out to see me for a week before I left for overseas. We played around with the idea of me moving out, and he had me convinced I was important to him. Even when I was in the pre-deployment phase, my fellow soldiers loved to see how cute we were when sneaking in late-night calls. His texts were 'I can't wait to make more memories with you,' and 'you make me the happiest person.' Looking back now, I feel like I was so stupid to believe it. Then, all of the sudden, everything changed. I landed and reported to my new home for the next nine months, and I could barely get a response from him. I finally convinced myself that I couldn't sit there and pull myself apart because of him. It was barely two months in, and I had to be fully functioning. I called him out.

Then we continued our conversation on FaceTime. I told him all I was asking was for one day of the week to talk to him. He couldn't give me that. He literally sat on FaceTime and stared at me with a blank face. I remember him saying, 'Why aren't you yelling at me?' I told him I respected him too much to yell; I was trying to find a solution to this. He said he needed time to think. In anger, I sent him a letter telling him to grow up. Then I messaged him trying to pull more out, figuring out why he could go from 'I love you' to nothing. Again, he said he needed more time… a month later, I reached out. I called him out for being cowardly and told him I loved him, but I just wished he could have given me a reason. He never responded. I ended up getting hurt on the job and came home early… I thought maybe now that I was back, I would hear something. I sent him one last text, and of course, nothing.

Sad thing is, he was my friend before he was anything else. So, although I don't think I could ever go back to him, I would have liked to know that we could be friendly to each other one day... And then, just the other day, I get a text from a mutual friend. He is 'Facebook official' with someone… something I never got. Made a lot of sense now… he must have hit it off with someone and was too scared to say something to me. I had respect for him, but now I can't even look at him. I wrote him letters for every month I was gone, bought him surprise gifts to make up for my absence… but all I got from him was ghosting.

For the first time ever, I think I can say I sort of understand where the guy who ghosted her was coming from. I don't excuse his actions AT ALL, but I understand them.

He met someone. Because of that, he was too big of a coward to bring himself to end things with her when he knew how much she meant to him. Again, I don't condone his actions at all. But I think I understand where he was coming from.

That being said, I think the amount of heartbreak she felt after he ghosted her is probably a million times worse than what she would have felt had he just ripped the Band-Aid and told her he met someone else while she was deployed.

Furthermore, I see literally no excuse for just completely ignoring her text saying she was back home. She says it herself, they were friends first. How could you treat your friend like that?

What do you guys think? Comment any and all of your thoughts below.

If you have your own submission for “Boom, Ghosted,” please submit them to me at boomghosted@elitedaily.com!