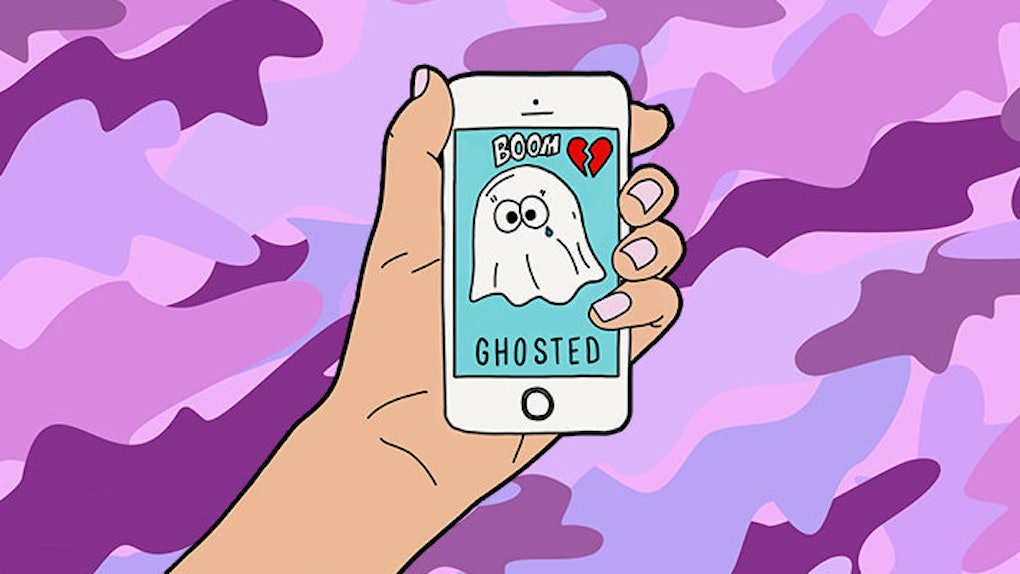 This week we have Allison*, who warned the guy she was seeing that the only thing that really sets her off when it comes to dating is being ghosted. Of course, he then proceeded to ghost her.

Read the story from her point of view:

I met Jared* on Tinder. To most, it would not be shocking that he ghosted me, but the story moves forward in a very interesting way. He came on very strong, sent me witty messages at work (the same day I was planning on deleting Tinder, mind you) and followed up that evening with an offer for drinks and a walk in Rock Creek Park with his dog (but joked that was fourth date material). Since I had plans every day and a friend in town, we texted for a week and weren't able to meet until the following Thursday. During that time, he mentioned dating is a game of “who will show their crazy first.” I told him the only time I get “crazy” is if I am fully ignored or ghosted. He promised to respect that, and silly me, I trusted him. I had a 'Christmas in July' party at work that day — costume contest and all — so he requested I wear the outfit [to our date]. He was completely goofy and into it[.] It turned into the never-ending date. We talked about life, family traditions, love, school, secrets and best friends. It was almost as if we had know each other for years. He was so confident in how compatible we were that he planned out the next four dates. We made out on a street corner like teenagers, and he sent me home in an Uber at 2:15 am. The next date was just as funny, but it seemed a little different. There was the same amazing conversation, walking around, cuddling in the Uber, etc. After dinner, I said I wouldnt go home with him, so he told me it was time to go home and sent me on my way. We didn't talk as much for a few days, but got back into the swing of things. Our next date was cancelled. He had a work event to attend, which he was texting me about the entire time. Every day after that, we talked from when we woke up to when we went to bed. In my mind, I thought, 'He couldn't be seeing anyone else. Shit, I don't even have time to talk to anyone else.' So, I didn't and logged off my Tinder (like an idiot). The following Saturday was our next date, right before he left for a work trip. We went on that long hike through Rock Creek Park to find the Capitol Stones. We got lost. We sat for a while in his favorite place in the park and exchanged kisses. We talked about how we would want our future weddings to be (he brought it up), and he made jokes that if it was me, he wanted Vineyard Vines cumberbuns, no compromise. We finished our walk, and he cancelled his plans that evening to spend more time with me. So, we go back to his apartment to watch a movie, and here's where it starts getting interesting. He charges his phone, and immediately, it's blowing up. I make a joke with him and said, 'It's all your other Tinder dates booty-calling you.' He brushed it off, saying, 'How would I have time to date others, and why would I? I have you.' We end up hooking up. (I usually hold out longer, but honestly, this guy and I really clicked and were making future plans for the fall.) He cuddled me, saying how this must be destiny and how happy he was that I was there. I am usually terribly skeptical about this stuff, but I have never known a player in all my years to be that ballsy with the cutesy stuff. Everything went on as expected. We woke up, got bagels, walked his dog and talked for a few hours. He went to Reno that night for work, texted me good morning when he got up, and sent me videos and pictures from the event his PR firm was hosting. It was totally normal, and to me, pretty perfect. He kept apologizing for not being able to talk to me more since we had a three-hour time difference. It was definitely genuine stuff. Then, I left to go out of town for a bachelorette party right after he got back. Things seemed normal. He said he was excited to see me and was texting me about our future road trip.

A little later, he said this:

We talked the whole time when I was the passenger on the trip until the time he got off work. At 5 pm, he disappeared.  I assumed he was going out, but he normally would mention it if he was. I let it be and continued with my trip. I checked in the next day when I didn't get the usual “good morning”:

There was no response to the picture I sent him later of a house on our trip or any of the random texts after. I followed up (side note, he was never quiet):

And then Sunday rolls around. (He loves shrimp and grits):

I assumed he was working or sleeping, but then again, he usually tells me. Also, we had talked about playing racquetball when I got back, so I asked when I was seeing him. Nothing. So, I reached out again Sunday right before I got home from the beach and again on Monday morning, but there was nothing.

So, I logged back into Tinder because I am suspicious AF. This was all too weird. He updated his profile completely with pictures I told him were cuter (ones he sent me over the past month). So, my crazy girl did come out just a smidgen, but why wouldn't it at that point? I was being ghosted by a guy who was claiming I was perfect less than a week prior.

And this was my final crazy girl moment (I warned him the only thing that gets to me is ghosting):

Needless to say, I came across as *slightly* crazy (I hate calling myself that), but the greater point to be made is how disrespectful people have become when it comes to dating. My friends ghost, and I have now been ghosted twice in my 27 years. This brings out the ugliest side of people you can imagine. Every nasty insecurity a person can have suddenly boils up inside of them. I certainly have blamed myself for this in the past few days. I am sure he had his reasons. Maybe he wanted a hot hookup in Reno (that's when he changed, along with his pictures on his Tinder profile). Maybe he didn't like that I wasn't giving him space when I was on a trip. (We weren't doing anything when I texted him.) Maybe he is just an insecure prick. Maybe we were both too attached after a month of dating (unlikely). Whatever the reason, the moral of the story is, men and women alike should not use words like “destiny” and create a false sense of security when inevitably, those things are not true.

I don't know about you, but I think this guy is a very, very special kind of evil. She TOLD him the one thing that would make her go full crazy. And what did he do with that information?

Well, first he promised her he would never do that one thing, and then he went ahead and did it. Like I said, EVIL.

What do you guys think? Do you somehow see where he was coming from? Is there another way to interpret this whole situation?

If so, ENLIGHTEN ME.

Again, as always, if you have your own story you'd like to submit to "Boom, Ghosted," feel free to privately message me here.