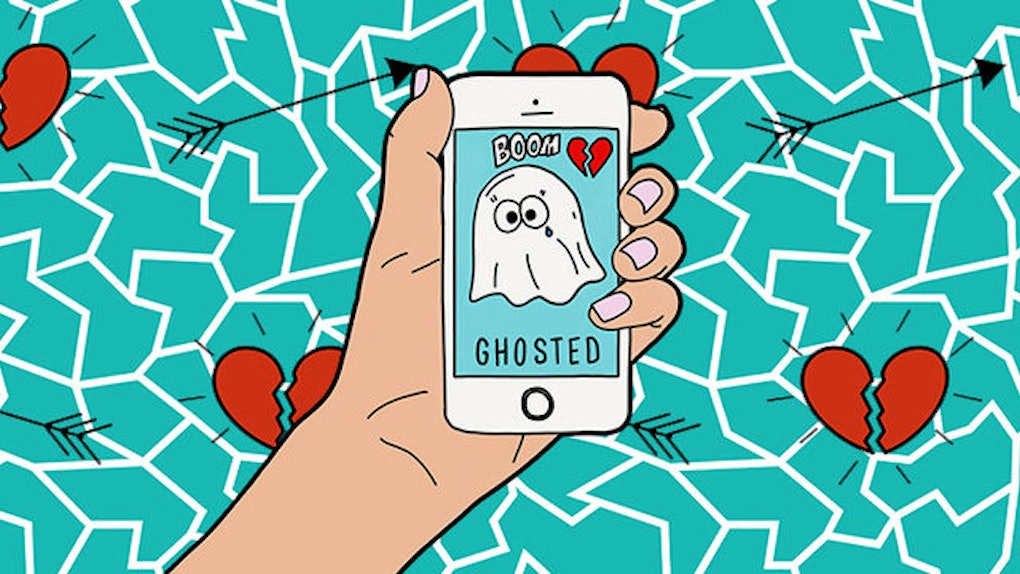 This week we have Jared* who was ghosted by his friend after he finally mustered up the strength to admit his feelings for her. I'm pretty excited about this submission because it's our FIRST MALE RESPONDENT:

A few years ago, Facebook suggested a girl I knew in college in its 'People You Might Know' section. I remembered her, so I added her. We spent months catching up on Facebook Messenger and exchanged phone numbers. Our conversation stayed pretty casual for a while, talking about college sports, jobs and other things like that. But over the course of a year, our texts started getting more serious. She still lived far away, but we texted good morning/good night texts and asked about each others' day almost every day. Meanwhile, she dated a few guys, and I dated a few girls, but nothing stuck for either of us. After over a year of texting, she invited me to visit her and spend a weekend at her place. So I did, and I brought condoms just in case. But I flew home disappointed, not because there was no sex, but because she seemed distant in person. A bit after that, she posted on Facebook that she found a job an hour away from me, which is also where her parents live. After a few more months of texting, we agreed to meet up again for a weekend downtown in a city close to me. I got a hotel room (two beds) for one night, and she suggested getting it for a second night as well. We spent the entire first day together, drank a lot, ate a lot, laughed and even completed each other's sentences. Overall, we had a great time, and we made plans to get together again. At our final stop, however, everything fell apart. We were both drunk, and she yelled “Fuck you” to me. I responded, “Fuck you, too.” Unsurprisingly, she ignored me after that. A friend of mine asked me if I liked her. I said, “Yeah, I have for years."

A friend of mine asked me if I liked her. I said, “Yeah, I have for years."

After the bar closed, we walked back to the hotel, and she continued ignoring me. Oh, and while she walked, she texted her boyfriend. (Did I forget to mention she had a long-distance boyfriend? She failed to tell me as well until two weeks before her visit. She also admitted to dating him while I flew to visit her months earlier.) When we got back to the room, I was supremely annoyed and still drunk. I called her boyfriend an asshole and called her immature. She woke up early the next morning and wanted to leave, so I walked her to her car. But before she left, I told her I still thought there was potential between us. Not the best timing – OK, horrible timing – but I was still buzzed. She reminded me she was dating someone, gave me a hug and half the money for the hotel, got in her car and drove off.

That was a year ago. I haven't heard from her since.

I have to say, because this is a guy who was ghosted, my analysis of the whole situation is a little different than usual.

How so? Well, I'm embarrassed to say I think I've been the girl in this catastrophe before. I just never took into consideration how much simply ignoring someone after an awkward encounter like that could hurt a guy's feelings.

So, for me at least, this story provided some perspective.

As always, if you have your own submission for “Boom, Ghosted,” please feel free to send it over to me at boomghosted@elitedaily.com.