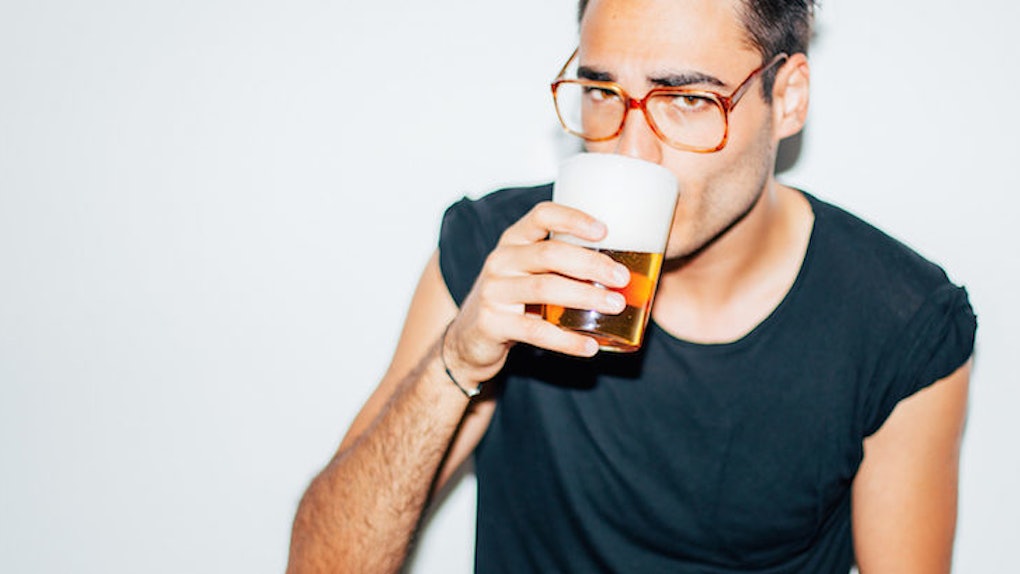 There are numerous theories about how to tell whether or not your new potential partner will be a good lover.

While "How I Met Your Mother" boasted most women decide within the first eight seconds whether or not they'd sleep with a man (and it's true things like looks, sense of humor and wallet size all come into account), you should take a deep breath, ladies, and follow these rules.

If you really want to know if your new potential beau is worth a tango in the sack, look no further than this "Sex and Suds" list.

Before we get started, let's just group this whole first category together.

Culture evolves based on trends, and the people who remain relevant are those who can keep up with these trends and stay ahead of the curve. All others will be left in the dust, and they are definitely are not worthy of seeing the family jewels.

With this in mind, we can pretty much assume that people who still heavily consume big brand beers are pretty lame in bed.

Don't get me wrong; most of us who are in tune with the industry have our "shame beers." This is a beer you don't drink regularly, but when the time is right, and the beer is ice cold, it's perfectly acceptable to crack a Budlight Lime or a Corona.

However, if your new love interest seems enamored with big brand names (i.e. Bud, Coors, Miller and all their affiliates), then you most likely have a sexual dud on your hands.

Now, if you enjoy completely vanilla sex with no foreplay, no inventive bedroom ideas and a lot of I-don't-know-what's-wrong-this-never-happens, then feel free to scope out the frat guys at the bar.

If you're ready for a real man, a real Don Juan de Cerveza, then skip the big brands and find your dream guy in the rest of this list.

Now, you may be thinking to yourself, "But Lager? Isn't that what Budweiser and most light beer is?"

The answer is yes, but mostly no! Big brand lagers are nothing but watered-down garbage malt. A true lager is a thing of beauty, and it should not be shunned simply because of the bad name bestowed to it by larger brands.

The Lager Guy is not simply drinking Bud heavy. He is an astute observer of all lagers and the varieties they encompass.

Though it's more complicated than my definition, for the sake of simplicity, we will classify "lagers" as anything crisp, clean and refreshing. Just like his beer of choice, the Lager Guy is not a complicated creature.

He works hard and he plays harder. He understands that though other varieties may offer more complexity, he can drink 12 of his brews, while other craft beer drinkers may only drink five or six.

That's why the Lager Guy is the marathon man in the bedroom. He may not always hit it out of the park, but you can be sure within five minutes, he's back and ready for round two, three and four.

It's true that in recent years, just like any other trend, craft beer has garnered its fair share of beer snobs, or as they're affectionately called, "Hop Heads."

IPAs are arguably the most complex and largest ranging style of beer right now in America. It seems every new brewery that pops up is required to have an IPA as part of its flagship lineup. And while many do a good job, some simply fall short.

An experienced Hop Head knows exactly what he wants in his IPA, whether it's subtle hop notes and a light, balanced body, or a dark, hoppy, malt monster.

This is why Hop Heads are great lovers; they know exactly what they want, and they are willing to give you exactly what you need.

Does a choke and a hair pull get your blood pumping? Just ask, and you shall receive. Maybe you're more into whips and handcuffs. Don't be shy; ask for it.

Just be careful with these guys. They are expecting exactly the same in return, so before you let your freak flag fly, make sure your sexual values are lined up. You don't want to be trading a slight ass slap for a ball gag and nipple clamps. (Or maybe you do?)

Great stouts, just like great lovers, are a truly rare find. If you find yourself on your next Tinder date, and Prince Charming orders something akin to motor oil for his glass, don't fret. You will soon come to realize that this gentleman enjoys his beer the same way he enjoys his women.

If he knows what he's doing, you will see him warm the glass with his hands. This is essentially "beer foreplay." He knows that in order to get the most from his beer, just like to get the most out of sex, he needs to warm it up before he just starts going to town.

With a stout drinker, you can expect a man who will take his time with you. As with beer, sex gets better with time. Even though it may seem like it's going on for too long at times, he knows it's all about enjoying the moment (and the flavors), rather than getting it over quickly.

If you're not a fan of "two-pump chumps" and gentlemen who don't return the favor, find yourself a man who enjoys himself something dark and luxurious.

(Beers to keep an eye out for: North Coast Old Rasputin, Oskar Blues Ten Fidy and Lagunitas Cappuccino Stout. If you want a man who will take you on a sexual journey of tantric proportions, look for Dogfish Head World Wide Stout.)

There is a sect of craft beer drinkers that is compulsively obsessed with any and all styles of sour beers. Traditionally a Belgian and Flemish style, this once-rare commodity in the states has made a huge surge in recent years, with massive festivals taking place exclusively focused on this style of beer.

If you've never had a sour, you will most assuredly not like it upon your first taste. This is not to say sours are bad; in fact, some of the best beers I've ever had have been sours. However, our pallets are simply not used to this style when we first try them.

Many times, these styles use wild yeast strains, and the resulting odor produced can be somewhat off-putting at first (many people associate it with vinegar). But once you've let your palette adjust, you will find that you crave this style more than you ever thought you would.

That's why the Sour Snobs are basically the "Christian Greys" of the craft beer world. Most of us will admit we like the idea of something a little kinky now and again, but Sour Snobs make this a part of their everyday lives. They search for the weirdest, craziest, most insane sh*t they can get their hands on, and their sex lives are much the same.

If you find yourself with someone ordering drinks that come in fancy glasses with names you need a bachelor's degree to pronounce, tread lightly. You have found someone who doesn't know the definition of the missionary position.

Beers to keep an eye out for: Duchesse de Bourgogne, Petrus Aged Red, Cuvée Des Jacobins Rouge and basically anything from Jolly Pumpkin.

These lords of the brown town love nothing more than the sweet, nutty goodness of a toasty brown. Look for the guys in the bar who are wearing something with tweed patches on it. They are the kinds of guys who will talk to you all night about the real philosophical construct behind the great works of Shakespeare.

Is iambic pentameter really that important? I don't know, is a hazelnut better than a peanut? Of course it is!

You can assume this gentlemen is studying something like philosophy or creative writing of early Mesopotamia, and you won't have to wait long for him to tell you all about it. While he's not for everyone, this lover of all browns will be the perfect fit for the occasional few.

Well, now you know what's in the glass is more important than what may appear in front of you. Next time you're out trying to find "Mr. Right," make sure you discover the type of beer man you've come across. You can save yourself a lot of time if you're looking for a "Hop Head," and you come across a "Sour Snob."

This is not to say everyone falls perfectly within these categories, but more often than not, I think you will find this list rings true.

Just be sure, as with anything, too much of a good thing (in this case, beer) can turn even the most perfect man into a bumbling fool. So drink up, ladies.