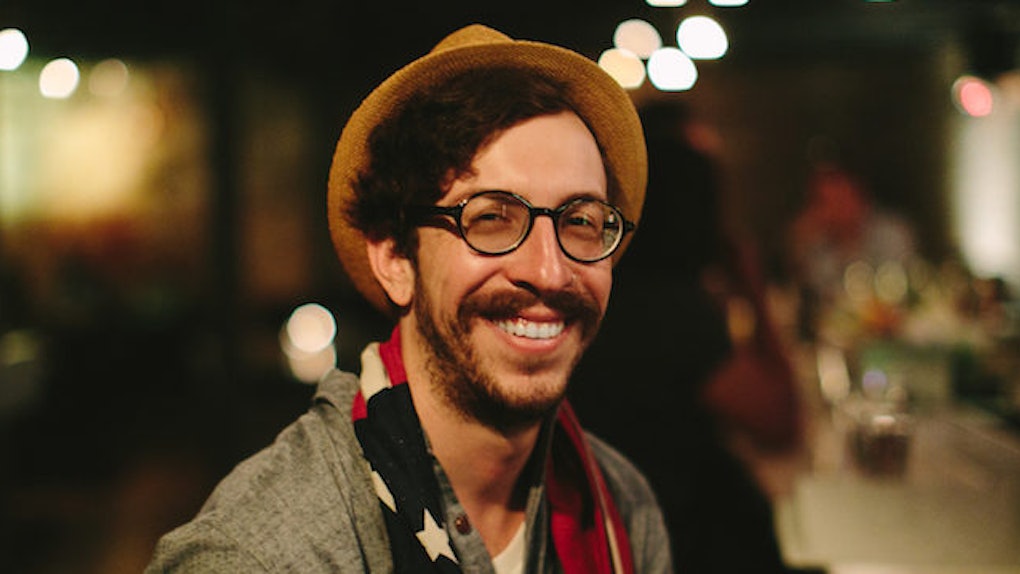 Here's How To Deal If You Hate Your Boyfriend's Clothes

Ahh, men. I want to say something about how we can't live with them and can't live without them, but it's 2017 and I'm officially retiring all dating cliches that pre-date 2009.

Women are known to be a bit judgmental about what their partners wear.

Traditional family-inclusive sitcom banter loves parading women as the intelligent one keeping the family together, while the oafish dad gets by with cheap jokes highlighting how clueless he is about everything. ("Everyone Loves Raymond," anyone?)

In these shows, women are often seen making sure their husbands look "presentable" and prohibiting them from doing basic, everyday things like shopping for themselves.

I've been guilty of this before as well. I remember cringing in high school, as my then-BF wore t-shirts way too big for him, jeans that sagged to the ground and to top it all off, FLIP FLOPS.

As I've gotten older, I've discovered that when you truly like someone, they could wear a burlap sack and you'd still want to be seen in public with them.

To celebrate this coming of age revelation I've had, I wanted to take the time to discuss all the "embarrassing" things guys wear, and why they can actually be pretty damn cute sometimes.

Luke Danes had a huge hand in making this look sexy. Justin Bieber, not so much.

Flat brim hats have somewhat eliminated the backwards hat look, but guys who still wear them can emulate a number of looks -- from schleppy slacker to hip-hop genius.

The backwards hat look is cute regardless because, sometimes, guys just need a "look" to cling on to. In "Gilmore Girls," Lorelai recognized this when she gave Luke a replacement hat for the beat up one he wore, and he actually started wearing the one she chose.

If you think about the fact that something as simple as a cap can provide comfort to your guy every day, you'll be much more accepting of any look he tries out.

OK, I'm weirdly a sucker for a good chain necklace, even though it can make guys look like they're in third grade again and just saw an Eminem music video for the first time.

If that's the case, then he's probably just rocking a simple thin chain, and pairs it with t-shirts and his everyday apparel. This look can sort of throw people off, but if you think about the fact that it's probably hidden or lost under the clothes he's wearing, it becomes less aggressive.

Then there's the rap star chain -- aka complete with medallion. This look is meant to show how many diamonds you can afford, and therefore, is still hot.

Although this look is more acceptable when celebs are donning it, if your BF is rocking a chain necklace, he's probably just trying to copy his idols he sees on TV. And you know what? That's pretty darn cute.

People's obsession with sports is very LOL. Sports fans are extremely passionate and can even get into fights with other fans over their team -- all because they happened to be born in the city the team represents.

Anyway, if guys are allowed to have the high school cheerleader fantasy, we're allowed to have the sports hero fantasy. Of course your guy isn't a member of the NHL or NBA, but that doesn't mean he should be excluded from appearing totally coordinated and spirited by wearing his team's favorite jersey.

Give your guy a break when he rocks a sports jersey; he probably doesn't have a lot of interests he can publicly represent without getting made fun of, but this is one of them.

OK, if girls didn't like cargo shorts, they'd literally be forced to be single for the rest of their lives -- or at least move to New York City, where cargo shorts are code for "my life is a mess, don't talk to me."

But you know, states like Kentucky and Alabama are definitely keeping these shorts in business, so you can't be too hard on a guy who still thinks cargo shorts are acceptable past age 10.

Does that sound like I'm hating on them? I'm not! I mean, cargo shorts dudes definitely never lose their phones or their wallet, and that can be a huge feat for some people. Who doesn't want a man who doesn't lose his belongings every five seconds?

There's something charming about a guy thinking he's found the perfect suit, and yet somehow he still looks like a cartoon head sticking out of a shrunken body. OK, not convinced?

Think about it this way: This is probably the easiest thing to help him fix -- not that you're in the business of "fixing" him. After the emo days of the early '00s, it's somewhat refreshing that guys have gone back to a more natural fit of jeans. Though skinny "jorts" will always be hot no matter what, so STFU.

Not now or will there ever be a legit excuse to wear a fedora. Just don't do it.

People beyond your SO are probably making fun of you if you sport one of these in public. And let it stand on the record here that fedoras are not lovable or quirky. So don't even try.

If you still don't love your guy's questionable clothing habits after reading this list, it may be time to examine if you really like him for him, or if you're just in the relationship for how it appears to look in front of other people.

Of course everyone is insecure in high school, but if you're already out of college and still harshly judging your guy's taste, it may be time to stop busting his balls for his hobbies, and get one of your own.

Or, you know, in other words, treat people how you want to be treated -- yes, especially the ones you love the most.