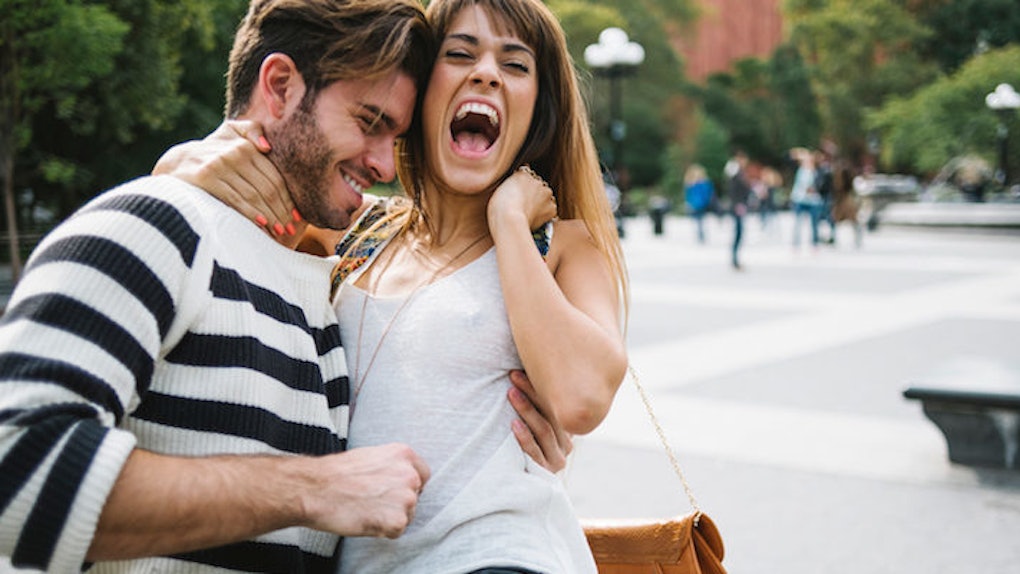 I like to be foul and real and completely uninhibited.

I like to live and joke in a way that makes me happy. And if you don't like my humor, then you can f*ck off.

There's something to be said about a woman who doesn't censor herself, a woman who keeps it real and crosses that proverbial line.

There's something to say about a woman who has a “man's sense of humor."

Of course, the whole idea of a sense of humor that revolves around taboo subjects and scathing remarks being limited to the male personality is offensive in itself.

But like most things, women are always receiving the sh*t end of the stick.

Being a woman who “jokes like a man” is a tough humor to carry. Because, unlike men, we're not praised for our witty remarks and line-crossing antics -- we're scorned for them.

But the thing about women with a vulgar sense of humor is they don't give a f*ck. People can take it or leave it, but you're not changing.

This is who you are, for better or worse, and you'll be damned if you ever have to start “acting like a lady.”

According to your mother, for every f*ck dropped, another year is added to your single life.

Every vulgar girl has heard “you'll never get a boyfriend if you keep talking like that” more times than she can use “f*ck” in a sentence.

She's used to it though, and if anything, it just motivates her to step it up a notch and find a man who will blow her, and her mother, out of the vulgar waters.

A woman with a vulgar sense of humor is always second-guessing that first impression. Oh sh*t, did she take it too far? Did she step on too many toes? Did she embarrass herself?

She wouldn't normally doubt herself this much, but it's hard to keep your sanity when everyone around you makes you feel insane and completely inappropriate.

No matter how much fun your boyfriend is having with you, he doesn't want to take you home.

He loves you, and he loves your mind. He finds your jokes and your vulgar charm completely addictive. His mother, however, isn't going to love you the same way.

He's nervous about bringing you around his parents, no matter how well you can switch the charm on.

People think you're way more secure than you are.

No matter how strong your mouth is, your insides are always going to be a little weaker.

Vulgar women may give off a tough exterior, but like any comedian, they are fighting through some demons and insecurities.

Just because they act tough doesn't mean they're ready to have every insult, remark and condemnation thrown back at them.

You're deemed controversial, yet men are just funny.

Women who are funny and edgy are considered “wild cards.” They call us loose cannons and unpredictable, yet when men are that way, they're just a good time.

They are funny and wild and the best guy to bring around. Just goes to show people condemn what they can't understand, and a lady with a man's humor is a goddamn anomaly.

People tell you to act like a lady, yet get upset when you're not acting like yourself.

You just can't win. You're either too vulgar or too shut off. When you act like yourself, you're scorned for it.

When you're reigning it in, you're told to stop acting so different. When you're doing one thing, it's always the wrong thing.

You're constantly being told to tone it down.

Like Joan Rivers, Amy Schumer and Sarah Silverman, all vulgar women have all had to fight for their right to joke like a man.

You get along with anyone who has a sense of humor.

One of the great advantages of having a specific type of humor is you get along with anyone who also has his or her own branded type of humor.

You make friends easily and can weed out the lame with just one joke.

You click easily with people who are worth clicking with.

You're always apologizing for it.

Unlike your male counterparts, you're forced to defend your humor.

You have to constantly apologize and feel sorry about “the way you acted,” when all you're doing is being yourself.

You're the only one with any real self-worth.

Any woman who can stand in a crowd and speak the way she wants to speak, say the things she wants to say and make jokes without worrying about the repercussions or judgments of her humor is a woman who has pride and self-respect.

She'd rather stay true to her vulgar self than conform to anything else. That's more than most people can say.

People who get your humor are the best people; no one else matters.

It's easier to find your friends when you're not trying to appease anyone and instead, allow those who understand and appreciate your humor to find their way to you.

Because the only thing better than a vulgar joke is a vulgar audience.