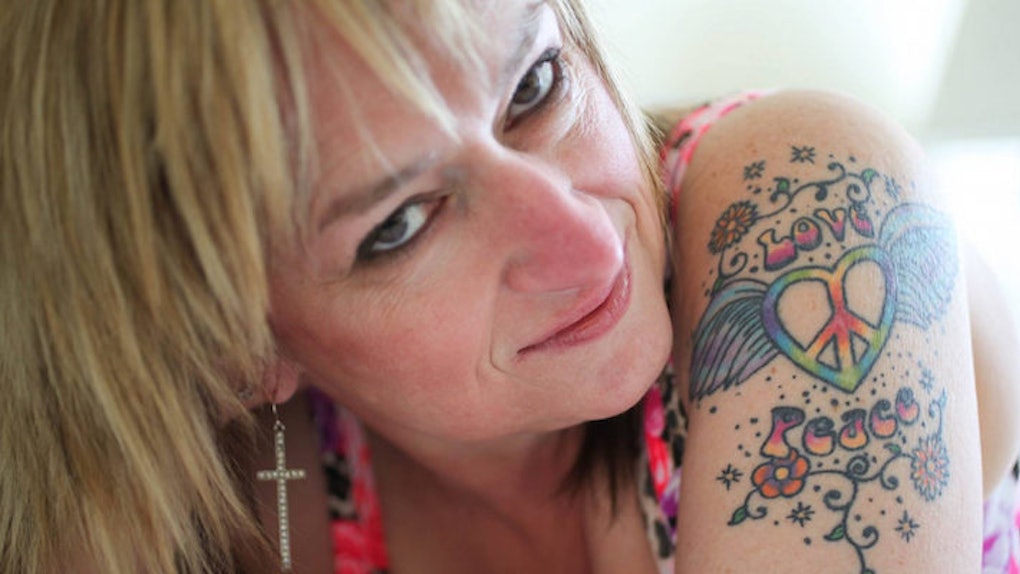 We Asked 3 Middle-Aged Women If They Regret Getting Tattooed

For the adorned, the most adrenaline-inducing sound is the buzz-buzz-buzz of a tattoo machine. The worst sound the tattooed hear are the oft-repeated words: “You're going to regret that when you're older.” To fact-check the validity of such claims, we spoke with three tattooed women over the age of 50.

They talked about the importance of sunscreen, how tattoos do make you a badass and the transformative power of wearable art.

Briony lives in California, and has collected tattoos since she was 19, eventually working as an artist herself, apprenticing out of the same tattoo shop where she first got inked.

So how'd you get into tattoos?

I had to be 19 when I got my first tattoo. I had thought about it for quite a while, and my husband [at the time] said, "OK, I'll get you your first tattoo."

He got me a book on Japanese ghost stories. One of them was a woodblock print by Yoshitoshi, from the late 19th century. There was a little figure in the corner of it that caught my attention; it's a fantastic figure in Japanese folklore called a tengu. I thought he was the cutest thing I'd ever seen.

I took him over to Sunset Strip Tattoo. [The artist] showed me how big it had to be, and the next thing I know I was getting this $500 tattoo on my shoulder blade, which is quite large. I was completely hooked by the whole process.

What are some of your other pieces?

My left arm is all autumn-colored leaves and birds.

The right arm is much more graphic. I've got a Pacific Northwest otter on the forearm and a design that was done for me. This is what happens when tattoo artist gets bored at a tattoo convention!

As an artist, what advice do you have about taking care of tattoos?

Sunburn is the one thing that will destroy a tattoo faster than anything. I used to tell my clients all the time, "If it will bleach out your porch roof, it will bleach your tattoos." It just destroys them. I do not do sun!

The princess on my right hip, her feet were done with single needle, and those lines are still hair thin. The only one that has faded at all is the Pacific Northwest otter on my left forearm. The red has definitely faded. I should probably someday think about getting it touched up. Red as a pigment is problematic.

Sunblock is the only way to protect them. My tattoos are really, really, beautiful. They still look as vibrant as they did the day that they were finished and all of them are over 20 years old.

Do you regret any of your tattoos?

I don't regret them at all. My mother had a conniption, and I heard repeatedly, "What are you going to do when you're 50?"

Well, I'm 62 and I'm very colorful. I have had nightmares about looking in the mirror and seeing them all gone. They've become so much a part of me that I can't really imagine not having them.

Would you get another one?

I don't think so. I'm pretty much done. You do get to a saturation point where you're like, "OK, I'm not sure I want to do any more of this." Because it's a long process and it does hurt!

Cathie is a South Carolina grandmother who started her collection not too long ago and is already itching for more.

Hey! Tell me about your tattoos.

I have three butterflies and two sets of [Chinese] symbols. I was 51 when I got my first one. I was going to do it at 50, but it just never happened. My now son-in-law is a tattoo artist; he has his own shop.

I loved it. I couldn't get enough of it. So then, about two years later, I had just one butterfly done, but that was not enough. If you get one you have to have another. They are addicting.

Why did you choose those designs?

When I got my first one, I was coming from a period of a lot of trauma. And I always loved the [Chinese] characters. I was looking through the book and saw the characters for wisdom and tranquility. I needed both of those things in my life, and I thought, "Well, if I can't get it [in life] I'm going to put it on my back."

The three butterflies signify my grandchildren. I enjoy it because when I look at it I see my children and my grandchildren. And I love the colors -- the pinks, the blues and the turquoise. I think they are pretty.

Does anyone give you a hard time about being older and having tattoos?

No. People that get tats, we march to our own drum beat. So people are usually not surprised when we do something like this. And people that have tattoos, we don't care if you don't have a tattoo. The people without tattoos are the ones that tend to be judgmental, I think!

I love mine! I consider it wearing art. [When I was getting tattooed], my youngest son was just waiting for me to scream. I was like, "I will never let them know how bad this hurts." I gave birth, I can do this.

No. In fact, I have to fight the urge to go and have another one. But, they are forever, so they really have to speak to me. It will have to be something that is really, really special to me.

I love mine, I think they are beautiful. I got ticked recently when somebody [on Facebook] said, "I don't need a tattoo to be a badass." But in a way, it does make you a little bit more of a badass! Let's just be real.

Shari, from Wyoming, is a tattooed midwife who also works with sexual assault survivors, and has helped heal some of her own pain through tattoos.

Will you tell me a little bit about yourself?

I'm an alcoholic and a drug addict in grateful recovery. So that's been a very long journey. I had to take a break from midwifery, I had to go to rehab and get well.

But, about six years into being single and thinking I wasn't ever going to meet anybody, I just met this man who rocked my world and I got remarried. He happened to have a lot of tattoos. I always thought that they were really cool, but it never dawned on me that they would be something I was interested in.

But then I decided one day that I wanted some sort of meaningful thing about my career as a nurse midwife on my body. So [my husband] took me to a tattoo parlor and I got the word “midwife” tattooed on my right shoulder. I've helped deliver about 2,000 babies in my lifetime. That's a lot of babies!

And you got many more after that.

Milestones kept happening that I wanted to commemorate and recognize. I did that through art on my body.

Part of being in recovery as a nurse practitioner is being monitored by the Board of Nursing. When I was released from monitoring, I talked to the tattoo artist and we designed my heart and peace sign that says “Love and Peace.” It represented being released from that monitoring, because I was monitored for over eight years.

So, to have been able to move through recovery, not perfectly, by any means, but to continue my work and know that I had value and that I had worth in that role as a nurse and that they trusted me, I went and got a tattoo that represented that for me.

After that I probably have about 20 tattoos.

Will you tell me about your sexual assault survivor tattoo?

On my lower back, I have a skull with vines and flowers coming out, and that was something that resulted from therapy. I'm a SANE (Sexual Assault Nurse Examiner) nurse because I have a history of sexual assault from years ago. That skull was representative of the person who hurt me when I was a child. There was a flower over his mouth because he would shush me.

Through therapy, and putting some of that ink and some of that art on my body, I was able to release a lot of that, and we added some very positive things [to the tattoo]. Butterflies and a freedom bird and things like that. It helped me move through that process of forgiving him and moving forward.

Do you regret any of your tattoos?

No, I don't. And I'll probably get more.

So there you have it. The next time somebody tells you you're going to regret that tattoo when you're "old," just remember these badass ladies and the many others like them, who are still rocking their ink and loving it. No regrets.